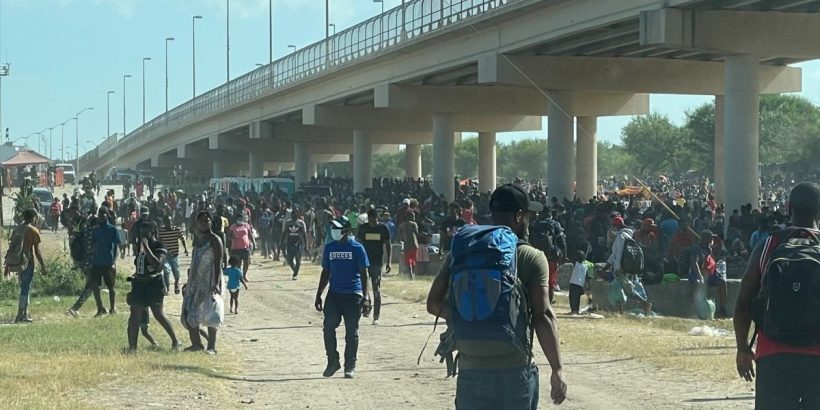 UPDATE: Illegals from Haiti waiting in Del Rio Texas now self deporting back to Mexico to avoid deportation flights back to Haiti. C-VINE News.

The Department of Homeland Security (DHS) will start to expel single adult male illegal immigrants who entered the United States in Del Rio, Texas, where an immigration crisis has been building.

Border Patrol Chief Raul Ortiz told Fox News on Sunday that single adult men will be expelled via the federal government’s Title 42 rule, although most family units who crossed illegally will be processed and released into the United States with a notice to appear in an immigration court. The Epoch Times has contacted Customs and Border Protection (CBP) and DHS for comment.

Ortiz said in a news conference Sunday that deportation flights for some illegal immigrants back to Haiti have already started.

“They will be removed and they will be sent back to their country of origin,” Ortiz said of illegal aliens without a legitimate claim to stay in the United States.

More than 10,000 illegal aliens have congregated under and around a bridge in Del Rio as they wait to be processed. Members of Congress and Del Rio Mayor Bruno Lozano have said the situation is developing into a humanitarian crisis. The majority of the illegal immigrants appear to be of Haitian origin.

Ortiz said that “no one has crossed since midnight” in Del Rio, adding that some 3,300 aliens have been moved from the bridge area. Around 3,000 more are slated to be moved in the next 24 hours, he said.

Border Patrol agents closed the Del Rio Port of Entry late Friday in an effort to control the surge of illegal immigrants, and cross-border traffic is being diverted about 60 miles south to Eagle Pass, Texas.

“This temporary closure and shift is necessary in order for CBP to respond to urgent safety and security needs presented by an influx of migrants into Del Rio and is effective immediately,” CBP said in a statement. “It will advance and protect national interests and help ensure the safety of the traveling public, commercial traffic, and CBP employees and facilities.”

Throughout the crisis, the Biden administration has received bipartisan backlash for how it’s handling the swell of illegal immigrants.

“People in D.C. need to get off the bench and get in the game,” Martinez told ABC News. “This is a serious situation here.”

“The US is failing to protect its borders. Why aren’t you here?” he wrote to both Harris and Biden on Twitter. “The President has a plan for taxes,” Lozano also said, posting photos of the throngs of Haitian illegal immigrants. “Where is the plan to protect our southern border?”

Republican members of Congress also have sounded the alarm in recent days.

“This crisis has reached a boiling point—Del Rio officials are not equipped to handle nearly 15,000 migrants pouring into their community,” Rep. August Pfluger (R-Texas) said in a Saturday statement. “What will it take to wake this Administration up to the realities of this crisis? There is a real human cost to Biden’s weak border policies.”