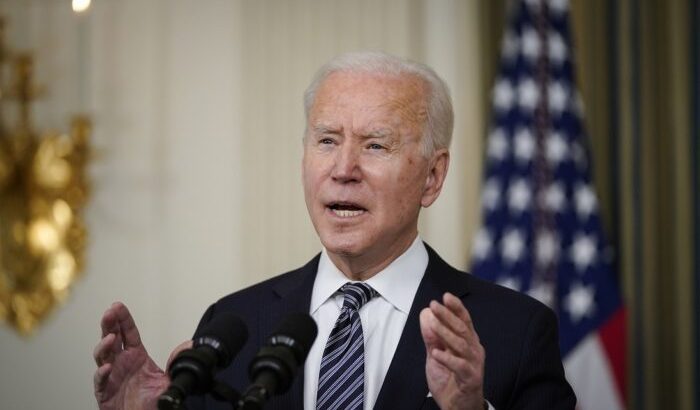 Joe Biden outlined additional sanctions against Russia while calling Vladimir Putin “the aggressor” in Ukraine. The U.S. president addressed the nation Thursday, announcing the U.S. is cutting off Russia’s largest bank, sanctioning more elites and taking other measures to limit its ability to be part of the world economy.

Biden claimed these sanctions will have long-term impacts and debilitate Russia’s financial system for years to come. He also said additional U.S. troops will be deployed to Germany to reinforce NATO allies. However, he asserted U.S. forces will not be engaging with Russia in Ukraine. The U.S. is also preparing for possible Russian cyber attacks.

Western allies reportedly believe the Ukrainian capital of Kiev may fall to invading Russian forces as soon as Thursday night. That’s according to a Bloomberg report citing a senior western intelligence official.

The country’s air defenses are also reported to have been eliminated and Russian ground troops are believed to be advancing towards the capital. This comes amid speculation Russian President Putin is seeking to oust Ukraine’s democratically-elected government and install a pro-Kremlin regime by force.

Ukrainian President Zelenskyy warned of a new Iron Curtain falling as Russian forces attack on several fronts. He made the remarks Thursday and claimed Ukrainian forces are engaged in heavy fighting in its northern region. However, Zelenskyy said the most problematic area is in the southern part of the country where Russia’s ground forces have moved in from Crimea. Dozens of casualties have been reported on both sides of the war

Zelenskyy called on other European countries to help and warned if they don’t step up, they will be next.