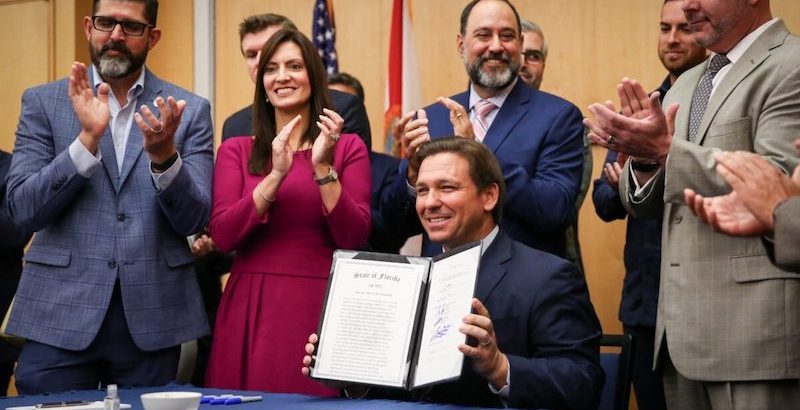 MIAMI—Florida Gov. Ron DeSantis has signed into law a bill—the first of its kind in the United States—allowing Floridians to sue Big Tech platforms.

A number of free speech advocates, including Cuban and Venezuelan exiles, state senators, and deplatformed influencers, stood behind DeSantis as he made the announcement at Florida International University on May 24.

Courts may award up to $100,000 in damages to an individual if a social media platform censors or shadowbans a user’s content, deplatforms a user, or if it hasn’t applied censorship or deplatforming standards in a consistent manner, according to the text of the bill.

“We will be the first state to hold Big Tech accountable,” DeSantis said at a press conference. “They are exerting a power that really has no precedent in American history.”

As an example, the governor mentioned that people were deplatformed for discussing the Wuhan lab leak theory regarding the origins of the CCP (Chinese Communist Party) virus, whereas now that theory has become a topic of mainstream discussion.

While Floridians have the right to block anyone, it’s not the role of Big Tech to censor, said DeSantis.

“SB 7072 is a bold first step to reining in Big Tech tyranny by defending the rights of all Floridians in the digital space,” DeSantis said. “Over the years, these platforms have changed from neutral platforms that provide Americans with the freedom to speak to enforcers of preferred narratives.

“Florida is the first state to hold Big Tech accountable by empowering each and every Floridian silenced by arbitrary corporate censorship to fight back. This is a groundbreaking bill that protects Floridians from Silicon Valley’s power grab.”

If social media platforms are found to have violated antitrust law, they’ll be restricted from contracting with any public entity. That “antitrust violator” blacklist imposes real consequences for Big Tech oligopolies’ bottom line. According to DeSantis, the law will also require social media companies to be transparent about their content moderation practices and give users proper notice of changes to those policies.

According to Florida state, the new law will likely be able to withstand legal challenges, as it contains language that explains how Big Tech companies are different from other corporations, and that Section 230 requires companies to act in good faith—something the governor accuses Big Tech of not always following.

Florida Lieutenant Governor Jeanette Nuñez said at the same conference that “Florida is taking back the virtual public square as a place where information and ideas can flow freely.”

“Many of our constituents know the dangers of being silenced or have been silenced themselves under communist rule,” she said.

“Thankfully, in Florida we have a Governor that fights against big tech oligarchs that contrive, manipulate, and censor if you voice views that run contrary to their radical leftist narrative.”

Florida won’t be the only state enacting such a law, according to DeSantis.

“We are seeing other states now following suit,” he said. “It starts in Florida but it doesn’t end in Florida.”