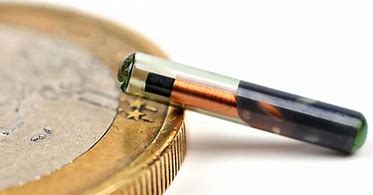 Employees at a Wisconsin firm got embedded with microchips–

RIVER FALLS, Wis. — A local firm here made good today on its vow to embed employees with microchips.
Sporting “I Got Chipped” T-shirts, some 40 workers at Three Square Market, a firm that makes cafeteria kiosks aimed at replacing vending machines, got tiny rice-sized microchips embedded in their hands.
Company officials said it was for convenience, a way for them to bypass using company badges and corporate log-ons to computers. Now, they can just have their hands read by a reader, similar to using a smartphone to pay for goods.

The company would like to see payments go cashless, as iPhone users do with Apple Pay. Except in this case, consumers use their hand instead of a smartphone to pay.
The chip is not a tracker nor does it have GPS in it, so the boss can’t track your movements, company officials say. Still, to those who worry about Big Brother having more control over our lives, Three Square Market President Patrick McMullan says you should, “take your cell phone and throw it away.”

The chips come from Biohax Sweden, a company that says it has nearly 3,000 people using it in Europe. The founder of that company, Jowan Osterlund, has struck alliances with companies to pay to have the chips installed in employees or pass them out at tech fairs.

Three Square Market employees say they were having the chip installed to be part of the larger team, and help develop the technology.

The chip ceremony was held in the company’s cafeteria, where a local tattoo artist, was on hand to perform the installation.

The entire process took about a minute. It started with Osterlund cleaning the skin, finding a spot in the hand to pinch, then asking the employee to inhale and exhale as he inserted a syringe, install the chip, and place a band-aid over the spot.

“The pinch hurt more than the injection,” says McMullen. “It stung for about an hour and half afterwards, but now it’s getting back to normal.”
But what seemed normal in Wisconsin played out differently across the Internet.

During our Facebook Live interview with McMullen, Chris Malak from Winneconne, Wis., said, “I have a co-worker who can never keep track of their keys thus always asking for mine and no idea what her pass word are. This would be good for her. But as for me, hell no.”