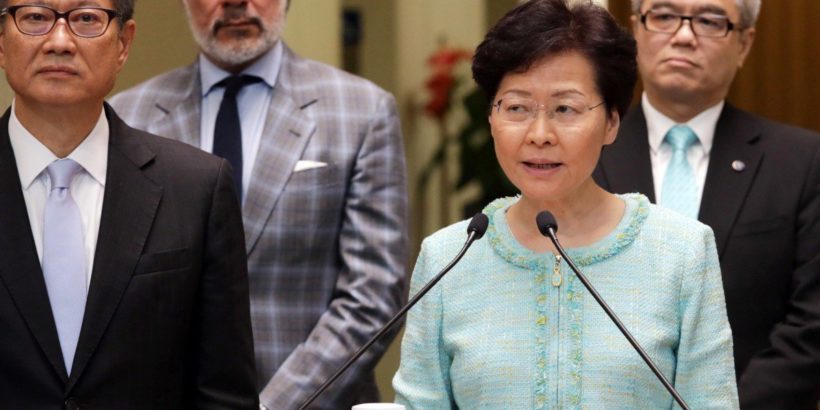 “Analysts said there were critical differences between the suspension and withdrawal of a bill.”

In addition to the canceling of the Extradition Bill, Carrie Lam also set up a platform to look into key causes of the protest crisis.

She will also set up an investigative platform to look into the fundamental causes of the social unrest and suggest solutions for the way forward, stopping short of turning it into a full-fledged commission of inquiry, as demanded by protesters.

The decision to withdraw the bill will mean that the government is finally acceding to at least one of the five demands of the protesters, who have taken to the streets over the past 13 weeks to voice not just their opposition to the legislation, but the overall governance of the city in demonstrations that have become increasingly violent.

Apart from the formal withdrawal of the legislation, the protesters have asked for the government to set up a commission of inquiry to investigate police conduct in tackling the protests, grant amnesty to those who have been arrested, stop characterising the protests as riots, and restart the city’s stalled political reform process.

Whether they will view the investigative committee as adequate in meeting the call for a commission remains to be seen. On the bill withdrawal, a government source said that Lam will emphasise that the move was a technical procedure to streamline the legislative agenda, with the Legislative Council set to reopen in October after its summer break.

Lam had earlier suspended the bill, which would have allowed for the extradition of criminals to jurisdictions with which the city lacked a treaty, including the mainland, but critics have not been satisfied.

They argued that for as long as the bill remained on the legislative agenda, there was every chance it could be resuscitated within the Legislative Council’s current term which ends next year.

The chief executive dug her heels in, saying the bill was suspended to signal that the government’s intention – to close existing loopholes to the legislation to go after criminals who were treating the city as a safe haven – remained a worthy and legitimate goal.

A day after she suspended the bill, an estimated 2 million people took to the streets on June 16, and more protests have since followed.

The chief executive then declared the bill to be “dead”, stressing that there was not a chance that it would be tabled. Critics again lambasted her for being prideful in not wanting to be seen to be backing down.

Last weekend saw some of the fiercest battles between protesters and police, as the force launched a wave of

mass arrests on the eve of a banned march, and demonstrators lobbed 100 petrol bombs at targets such as police headquarters and stations and government buildings.

“This gesture to formally withdraw is a bid to cool down the atmosphere,” a source said.

Another source said the full withdrawal of the bill was the easiest way to ease ongoing tensions in the city.

“The chief executive started to change her mind after meeting with 19 city leaders two weeks ago. She heeded their views on how to de-escalate the tensions,” the source said.

On August 24, some 19 senior city leaders and politicians gathered at Lam’s residence to brainstorm how to broker a dialogue with those behind Hong Kong’s crippling anti-government protest crisis.

Lam is due to meet her pro-establishment allies this afternoon at her official residence in Government House, other sources said.

All 43 pro-establishment lawmakers were invited on Tuesday night to meet Carrie Lam at 4pm on Wednesday. Hong Kong deputies to the National People’s Congress and the Chinese People’s Political Consultative Conference have also been invited to attend the afternoon meeting.

Tik Chi-yuen, chairman of the political group, Third Side, and one of the attendees at the August 24 meeting, said the withdrawal of the bill, and the launch of an independent inquiry, were practical ways for the government to show sincerity in engaging in dialogue with various sectors.

Analysts said there were critical differences between the suspension and withdrawal of a bill.

Experts on parliamentary procedures said that with a suspension, the legislation was technically still alive and, in theory, could be reintroduced by way of a straightforward notice from the government to the Legislative Council president.

It remains on the books as part of the government’s legislative agenda, but its shelf life will exist in sync with the current term of Legco, which ends in July 2020.

In 2003, the government tried to enact the national security law, a constitutional duty under Article 23 of the Basic Law, the city’s mini-constitution. Back then half a million people took to the streets in opposition.

Then chief executive Tung Chee-hwa first delayed the second reading of the draft bill on the national security law in July, and promised to listen to public opinion and study the draft bill again. But faced with doubts, Tung withdrew the bill entirely two months later.

On LIHKG, the Reddit-like site popular with protesters, the immediate reaction appeared of scepticism as commentators said the withdrawal was coming too little too late. They said the key demand now was to hold the police force accountable, as clashes with them had turned increasingly violent.

Lam’s decision comes a day before she leaves for Nanning in Guangxi for the annual pan-Pearl River Delta regional cooperation conference. It will mark her first official trip outside the city since the protests began on June 9. Chief Secretary Matthew Cheung Kin-chung will be acting chief executive.