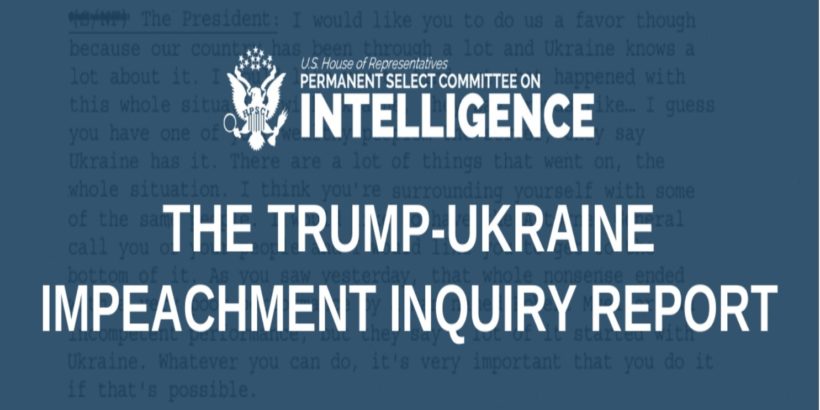 “The impeachment inquiry into Donald J. Trump, the 45th President of the United States, uncovered a months-long effort by President Trump to use the powers of his office to solicit foreign interference on his behalf in the 2020 election.,” the report opens.

“As described in this executive summary and the report that follows, President Trump’s scheme subverted U.S. foreign policy toward Ukraine and undermined our national security in favor of two politically motivated investigations that would help his presidential reelection campaign.  The President demanded that the newly-elected Ukrainian president, Volodymyr Zelensky, publicly announce investigations into a political rival that he apparently feared the most, former Vice President Joe Biden, and into a discredited theory that it was Ukraine, not Russia, that interfered in the 2016 presidential election.  To compel the Ukrainian President to do his political bidding, President Trump conditioned two official acts on the public announcement of the investigations:  a coveted White House visit and critical U.S. military assistance Ukraine needed to fight its Russian adversary.”

“In response, President Trump engaged in an unprecedented campaign of obstruction of this impeachment inquiry.  Nevertheless, due in large measure to patriotic and courageous public servants who provided the Committees with direct evidence of the President’s actions, the Committees uncovered significant misconduct on the part of the President of the United States.  As required under House Resolution 660, the Intelligence Committee, in consultation with the Committees on Oversight and Reform and Foreign Affairs, has prepared this report to detail the evidence uncovered to date, which will now be transmitted to the Judiciary Committee for its consideration.”

The executive summary breaks down into several subheads what the report deems “The President’s Misconduct: The President Conditioned a White House Meeting and Military Aid to Ukraine on a Public Announcement of Investigations Beneficial to his Reelection Campaign.”

Read the executive summary here and the full report here.

by Eric A. Blair