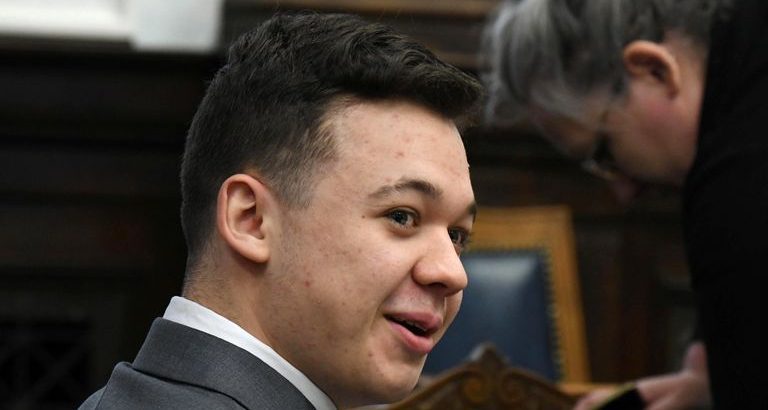 KENOSHA, Wisconsin—Jurors acquitted Kyle Rittenhouse on all counts on Friday.

The jury reached the verdict just after 12:10 p.m. local time and the foreman read it aloud in the Kenosha County Courthouse shortly afterwards.

Rittenhouse, 18, sat quietly before the verdict was read. Afterwards, he started shaking and breathing heavily. He hugged his lawyer.

“You were a wonderful jury to work with,” Kenosha County Circuit Judge Bruce Schroeder told jurors.

Schroeder also told the court not to react, “no matter how strongly” they feel about the decision.

Rittenhouse faced up to life in prison for five charges, including first-degree reckless homicide. A sixth charge was dropped on Monday.

Rittenhouse shot three men in Kenosha on Aug. 25, 2020. The first man, Joseph Rosenbaum, 36, was advancing on him. Rosenbaum’s hand was over the barrel of the rifle Rittenhouse held, according to expert testimony during the trial. The closest witness said Rosenbaum lunged for the weapon.

Rittenhouse began running towards law enforcement officers but was attacked by several people, including Anthony Huber, 26, who struck Rittenhouse’s head with a skateboard. Rittenhouse shot Huber.

The third man who was shot, Gaige Grosskreutz, now 28, was pointing a handgun at Rittenhouse when he was fired upon.

Rosenbaum and Huber died from their wounds. Grosskreutz survived with a gunshot wound to his right bicep.

Defense lawyers and Rittenhouse said all three shootings were in self-defense. Prosecutors said Rittenhouse was negligent and reckless in his handling of the weapon and should have surrendered to those attacking him.

Wisconsin National Guard troops were stationed earlier this week about 60 miles outside of Kenosha in case riots started in response to the verdict.

Wisconsin Gov. Tony Evers, a Democrat, had called for peace no matter what the jury decided.

“I urge folks who are otherwise not from the area to please respect the community by reconsidering any plans to travel there and encourage those who might choose to assemble and exercise their First Amendment rights to do so safely and peacefully,” Evers said in a statement.

Authorities in Kenosha said Tuesday that nothing had happened yet to trigger road closures or other crowd control measures. They did not immediately respond to the verdict.

White House press secretary Jen Psaki said during a briefing just before the verdict that the White House would issue a statement after it was issued.

“We have been in close contact with officials on the ground through law enforcement channels to ensure we are supporting any efforts toward peaceful protest,” she said.

Outside the courthouse, pro- and anti-Rittenhouse protesters gathered, as they have been all week as the jury deliberated.

Vaun Mayes, who lives in Milwaukee, told The Epoch Times that the verdict wasn’t correct.

“It sends a message to the rest of the nation that folks can come down and agitate them, and if anyone reacts you can shoot them,” he said. “Kyle did everything he was not supposed to do and this was the result. He gets to claim self defense and walk away.”

Another man, who declined to be named but said he was from Los Angeles, said the verdict “meant the Second Amendment survived.”

“Kudos to the court,” he said.