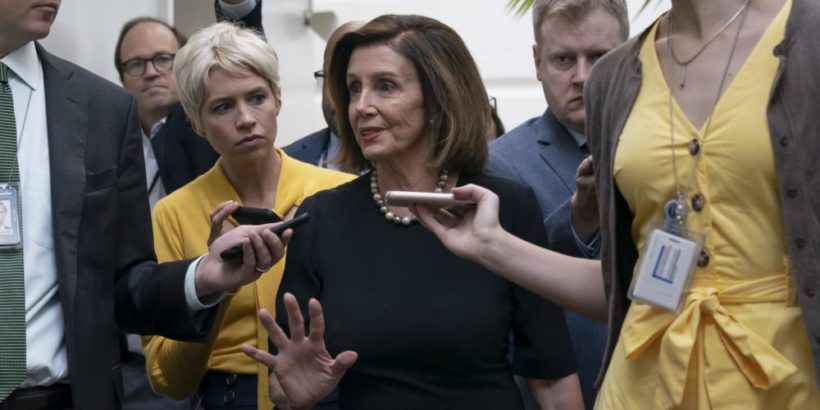 The White House on Tuesday formally told Speaker Pelosi and three other committee chairs to pound sand, calling their impeachment efforts “illegitimate” and “dangerous,” prompting a standoff with Congress.

Cipollone also called the Democrats’ impeachment inquiry a partisan effort “to overturn the results of the 2016 election” of President Donald Trump.

“Your unprecedented actions have left the president with no choice,” said the letter signed by Pat Cippolone. “In order to fulfill his duties to the American people, the Constitution, the Executive Branch, and all future occupants of the Office of the presidency, President Trump and his administration cannot participate in your partisan and unconstitutional inquiry under these circumstances.”

“Given that your inquiry lacks any legitimate constitutional foundation, any pretense of fairness, or even the most elementary due process protections, the executive branch cannot be expected to participate in it,” Cipollone wrote.

Earlier Tuesday, the State Department blocked the interview by EU Ambassador Gordon Sondland hours before he was set to testify on Capitol Hill, sending the Democrats into a tailspin.

House Democrats launched an impeachment inquiry into President Trump without holding a full vote on the House floor and Trump is fighting back.

Pelosi is trying to push forward with impeachment without a full vote so she doesn’t expose vulnerable, red-state Democrats who would likely lose their seats in 2020 if they went on the record supporting impeaching Trump.

Furthermore, without a full vote on impeachment, Minority members in the House Judiciary and House Intel committees do not have subpoena power and therefore cannot call in witnesses.

The White House told reporters Tuesday afternoon that no admin officials will testify in impeachment probe. Senior official says “that is administration policy under current circumstances.“