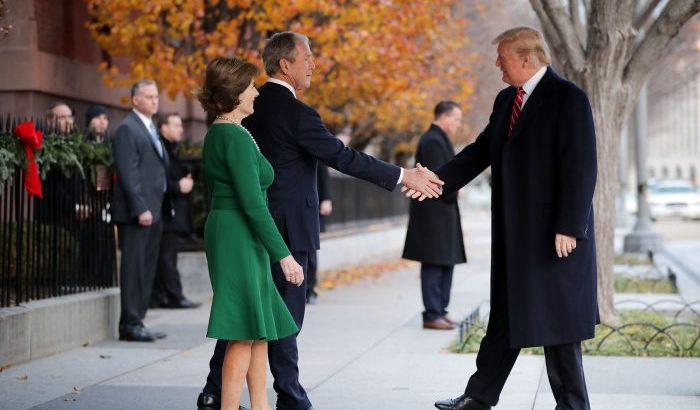 The New York Times published fake news about George W Bush not voting for Trump,  and has yet to retract it!

Why are they dragging their feet?

“This is completely made up,” Bush’s spokesman Freddy Ford told The Texas Tribune on Monday. “He is retired from presidential politics and has not indicated how he will vote.”

On Saturday, The New York Times reported that several high-profile Republicans don’t plan on supporting Trump, including Bush. The paper cited “people familiar with their thinking” for its report, without naming anyone.

The New York Times hasn’t yet updated its article with his statement.

“Freddy Ford, a spokesman for Mr. Bush, said the former president would stay out of the election and speak only on policy issues, as he did this week in stating that the country must ‘examine our tragic failures’ on race,” the article noted at the time.

Other Republicans who reportedly won’t be voting for the president in 2020 are Sen. Mitt Romney (R-Utah), former Arizona Sen. John McCain’s widow Cindy McCain, and former Secretary of State Colin Powell, the paper claimed. Powell has been vocal about his decision, telling CNN on Sunday that he “cannot in any way support President Trump this year.”

However, Powell publicly stated that he voted for former first lady Hillary Clinton in 2016. Romney and McCain have publicly sparred with Trump in the past, with Romney voting to convict Trump during his Senate impeachment trial earlier this year.

Trump then accused Powell of making tactical mistakes that mired the United States in the wars in Iraq and Afghanistan in the early 2000s under the Bush administration.

Powell, the president wrote on Twitter, “was very responsible for getting us into the disastrous Middle East Wars … Didn’t Powell say that Iraq had ‘weapons of mass destruction?’ They didn’t, but off we went to WAR!”

The New York Times report came after waves of protests—some of them violent—hit a number of U.S. cities in the wake of the death of George Floyd, a black man who died in police custody in Minneapolis.

Democrats in Congress on Monday unveiled legislation that would make lynching a hate crime and allow victims of misconduct and their families to sue police for damages in civil court, ending a legal doctrine known as qualified immunity. The legislation also was expected to ban police choke holds and racial profiling, require nationwide use of body cameras, and subject police to civilian review boards, according to congressional sources.