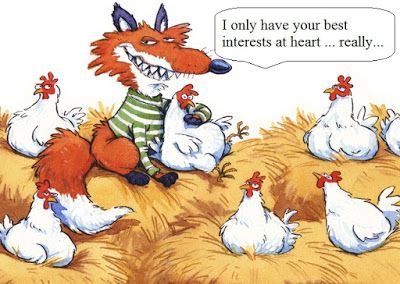 When The Wolf guards the hen house, how safe are the hens?

Vaccine-related patent holders sit within the CDC – how can such a conflict of interest be allowed?

I get the distinct impression that the CDC is another corrupt front for Deep State actors.  Control appears the name of the game, not the health of Americans. It’s like having the wolf guard the hen house; certain death is in the making.

Whose best interests does the CDC have in mind?  I’ll venture a guess . . .  not ours!

CDC Members Own More Than 50 Patents Connected to Vaccinations

Each of the 12  members of the CDC’s  ACIP  Committee has a significant influence on the health of nearly every member of the American population. Because they are responsible for adding to  and/or altering the national vaccine schedule, it is of critical importance that they remain objective and unbiased before determining whether a new vaccination is appropriate for use, particularly in the bodies of vulnerable young children. Unfortunately, a significant number of  ACIP committee members  receive direct financial returns when more vaccinations are added to the current schedule. Many own  vaccination related patent(s) and/or stock shares of the pharmaceutical companies  responsible for supplying  new vaccines  to the public. Others receive research grant money, funding for their academic departments, or payments for the oversight of vaccine safety trials.

The following is a partial list of some of the patents that are  owned or shared by members of the CDC and/or ACIP committee, including Dr. Paul Offit:

In total, 56 individual patents were found to be owned or shared by one or more members of the  ACIP  committee or other committees within the CDC.

Members Claim They are Unbiased

When prompted with questions pertaining to  their financial connections with  pharmaceutical companies, most  ACIP  members claim they are able to remain unbiased despite the  rewards they receive every time a new vaccination is recommended to the public. In numerous instances,  vaccines  released to  the market  are  later removed  after  serious side effects are  documented. The rotavirus vaccine was one such example; it was pulled from the market in 1999, a year after its initial approval. In 2001, the  House Government Reform Committee found that four out of the eight  ACIP  members who voted to approve the vaccine had direct financial ties to one or more of the pharmaceutical companies who produced  the vaccine for public use. Similar situations involving many other vaccinations have been independently documented  over the course of nearly 20 years.

The vaccination industry currently generates $30 billion in profit each year, some of which reaches the hands of the very people who create the vaccine schedule. Despite  concerns connecting vaccinations to the increase in  autism and a host of other disorders, the number of recommended vaccines continues to grow each year. With a new federal administration  interested in uncovering the dirty secrets hidden within alliances between CDC members and vaccine manufacturers, we may begin to see a wave of personal injury and wrongful death lawsuits related directly to unethical behaviors which have led to numerous unsafe vaccines being pushed on an unknowing public. If the  National Vaccine Injury Compensation Program  (NVICP) is amended or repealed, victims of vaccine damage will be legally permitted to file claims directly against vaccine manufacturers and  members of the  ACIP  committee who often have had knowledge of vaccine  risks yet continue to recommend their widespread use.