“People will be arrested as of tonight, tomorrow and it will go on for quite a while…This is the biggest sting operation probably, in our country that we’ve ever had.”

DEMOCRATS WERE SET UP IN “STING OPERATION” TO CATCH THEM STEALING ELECTION!
5 hours ago https://youtu.be/dG1aQ7iMdaM?t=192

Steve Pieczenik joins Owen Shroyer to share information that he was not allowed to before last night, which is that this election was the biggest sting operation in US history.

Each legitimate ballot bore a watermark and it was tokenized like a unit of cryptocurrency on the QFS blockchain. The ballots are also GPS tracked, “So they can tell not only which ones are real or fake but exactly where they are and if any got thrown away,” Steve said. 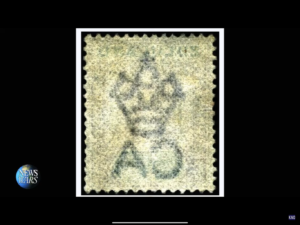 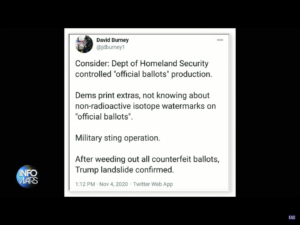 “We know pretty well where every ballot is, where it went and who has it. So, this is not a stolen election. On the contrary, we reversed the entire game of war along the lines of Sun Tzu’s ‘The Art of War’…
“In the ‘Art of War’, you pull back and allow your enemy to make all the mistakes they’re making, manipulate the situation and expose them and then, come in for the final killing. And that’s what’s happening now. None of this was unexpected, all of this was expected, all of this is part of the sting operation we’re running.”

He says, “Thousands and thousands of National Guard [troops]” have been sent to 12 states right now, to assist in securing the legitimate ballots and throwing out the fake ballots printed up by Democrats as part of their fraud operation…

“So, now, you have to reconsider what this is really about. The genius of Trump is that he is able to pull back at any point and manipulate the opponent without the opponent ever realizing it.

“This has been a set-up by Trump for a long, long time,” he says. “This is our counter-coup against the Bidens. And it’s exactly what we expected – the corruption in the mail, the corruption at USPS, corruption with the Democrats…there was no surprise, here…

“Arrests are not only coming, they’re being implemented. What you saw Corey Lewandowski and Pam Bondi saying, when they were in Clay County and as well, in Philadelphia, that was not just a threat, that was exactly what’s going to happen.

“People will be arrested as of tonight, tomorrow and it will go on for quite a while…This is the biggest sting operation probably, in our country that we’ve ever had.” https://forbiddenknowledgetv.net/democrats-were-set-up-in-sting-operation-to-catch-them-stealing-election/

Please leave your comments below! ↓