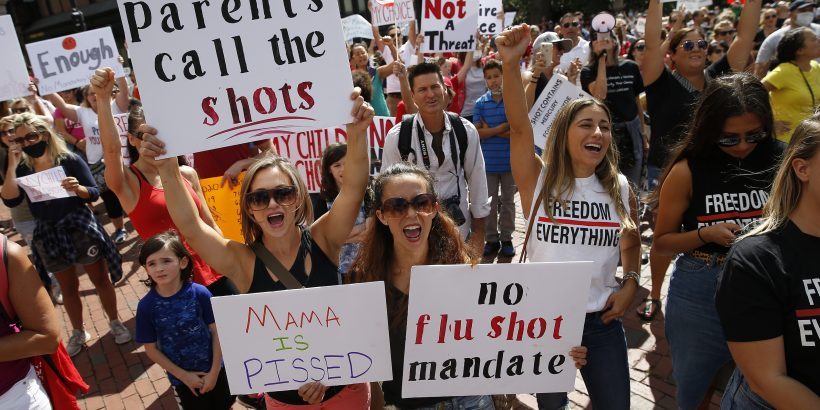 For Kelly Wiggen in Rutherford County, North Carolina, it began when she said the mask mandates in her child’s school weren’t adding up.

Like other constitutional rights groups such as the WNCFreedom2020 group and the North Carolina Citizens for Constitutional Rights, the Rutherford County Board of Accountability (RCBA) is a citizen-run group organized similarly to how established local government boards are structured according to the parliamentary procedure.

Government officials, or anyone with a spouse who is an elected official, can’t be a member but can be invited to attend, with a limited time frame in which to speak.

“There can be zero conflicts of interest,” Wiggen told The Epoch Times. “It’s going to flip the tables on them.”

Wiggen has been presenting her findings at various freedom rallies, such as one held by the Catawba County Mama Bears on Saturday.

“I think most people have the security in mind that local entities aren’t going to allow the federal government to come in and do whatever it wants,” she said.  “We look to these entities to protect us from that, but they’ve been bought off with these agreements.”

Having lost trust in local governments adhering more to CDC orders rather than their own policies, she said the RCBA came together to protect the children who are being affected by these policies, such as mandatory masks and quarantines, as well as future vaccine mandates.

One agreement she’s examined, signed by Rutherford County Health Director Karen Powell, states that as a recipient of funds awarded by the U.S. Department of Health and Human Services (HHS) through coronavirus-relief packages, the local health department must comply with existing and future directives from the HHS secretary and assist the U.S. government in the “implementation and enforcement of federal orders related to quarantine and isolation.”

“I promise you every local entity—sheriff, school, health department—that signed an agreement for COVID funding sold control of that entity to the federal government,” Wiggen said.

She said this has been seen with local school boards reversing from their initial “mask optional” stance at the beginning of the school semester back to mask required.

“I suspect they were reminded of the money they took,” Wiggen said.

In South Carolina, after Gov. Henry McMaster put out an executive order banning masks mandates, Miguel Cardona, the U.S. Secretary of Education, wrote a letter to McMaster stating that the ARP requires local agencies to adopt “science-based strategies,” such as “universal and correct wearing of masks.”

In June, HHS announced that it had awarded $1 billion in ARP funds to pre-school Head Start programs nationwide.

Wiggen pointed to the CDC’s report on options for creating camps to separate “high risk” from “low risk” people.

She’s even created a flow chart of how she said federal COVID-19 funding “has put local entities at the mercy” of the federal government and the state health director and secretary.

‘There’s Nothing to Stop Them’

“If you combine all of this together, there is nothing that could stop a federal vaccine mandate for our children in schools,” she said. “If your local government accepted COVID-19 money, that money is going to have the same terms and conditions, which means there is nothing they can do to stop the federal government from coming in and doing anything, and those local agencies actually agreed to assist.”

She then pointed to Gov. Roy Cooper’s Oct. 4 executive order 236 that gives the North Carolina Department of Health and Human Services Secretary Mandy Cohen “authority to modify or waive enforcement of certain legal constraints or regulations which restrict the immediate relief of human suffering,” as well as directs State Health Director Elizabeth Tilson to “issue any statewide standing order needed in her medical judgment to facilitate COVID-19 testing and vaccination.”

“If Mandy Cohen or the federal health secretary wanted to require everyone to get the injection, there’s nothing to stop them,” Wiggen said. “If that’s a directive they can claim is attached to the stopping of the spread of COVID-19, our local agencies have already signed an agreement.”

Meanwhile, Wiggen said Rutherford County Schools voted on Thursday to continue its mask mandate until the CDC says the school system can go seven days without being in the “high transmission” category.

“As of last night, we’ve had 94 positive cases in the past seven days, out of over 67,000 people, which is 0.1 percent of the population,” Wiggen said. “What exactly qualifies as low if 0.1 percent is high?”

Decisions not Based on Science but Directives

In an earlier board meeting, she filmed the chairman of the Rutherford County Commissioner meeting stating, “We’re not here tonight to make a decision based on the science one way or the other. You can find as many experts on both sides as you want to find, those for it and those against it. We’re not here for that.  We’re here for one thing, and that’s to make a decision based on a directive from our local health director on how the guidance is attributed to this toolkit and quarantine.”

For Wiggen, the commissioner’s statement reflects the national climate of health policies.

“Realistically, the way this country has been reacting, people will buy anything these days,” she said.