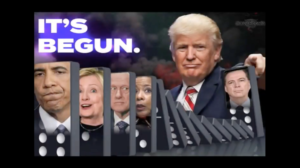 Can you feel it, Patriots? There’s PANIC in the air…and it’s manifesting everywhere.

There’s NO protection left for the weary, and they know they’re on quicksand, as their sands of time slip down through the Patriot hourglass. “So are the days of their lives”……

Paper trails. Cover ups. They’re getting their narratives tangled up as they attempt to maintain their weaving webs of deception! Biden loses it every time he speaks for himself. (C’mon, man! Are you a Junkie?!) The MSM wants us all to believe that he is leading in the polls….. HA! Are you buy-denning what they’re selling?? Nope. Me neither. He seems to not care that he’s off in the weeds. It’s like he knows it won’t matter come election time…hmmmm. Patriots know the playbook, either way, and the Storm has been allowed to swirl as the Durham boats fill in preparation to sail.

Our most anticipated character seems set to enter stage left by the end of the summer. John Durham, meet John Brennan! The two men are reportedly set to meet soon for an interview. How’d you like to be a fly on that wall?!

The “bombs” are raining down everywhere…as all the walls collapse on Wonderland.  Ukrainegate, FISAgate, Ghislaine Maxwell’s cesspool of filth. Add Seth Rich and Julian Assange to the mix, and Voila! The perfect STORM. It has begun. MS13 gang members “and associates” arrested for sex trafficking a minor just rips away the last remaining shred of umbrella Alice and her gang may still have had.

As if none of the above was going on, Hillary sticks to the script and tweets something ridiculous about Republicans planning to sabotage the election by slow-walking the ballots through USPS? I don’t think these people even have a clue how silly they look after having eaten all those goofy Mad Hatter tea cakes! Just for fun, Mike Pompeo decided to grab a jab of his own and tweeted a $10 Million REWARD for anyone who helps bring Foreign parties meddling in our election to justice. Gee, I wonder if he’ll get any [DS] flipper-takers?

Their agenda has come crystal ball clear, hasn’t it? END AMERICA. That is the Deep State goal. NO weapons, no cash, no checkpoint papers? YOU CANT BREATHE! At least, not without them telling  you when, where, and how.

Natural Law is God’s Law. Our Constitution was written in harmony with this. What the DS wants you to succumb to is their “law”. Man’s “law”, which is skewed in a most obvious and certain direction, which does not protect YOU!

Trump ran on being the “Law and Order” President. Along with countless other campaign promises, I do believe he’s going to continue to support our Military, National Guard, and Police Officers in doing their jobs to keep us all as safe as possible. He’s made an interesting statement now, while in Ohio, that has many looking to post 55 (5:5…?) by our favorite “Anon”.

President Trump said he’s got “a lot of enemies”…and “you might not see him for awhile”…. Is the Storm upon us, like the hurricane that “has followed him”? The Silent Majority continues to stand ever strong! Flags are out! Patriot pride is at an all time high. It’s like the air is electric. If you stand still and quiet, you can almost hear the grass growing at GITMO.