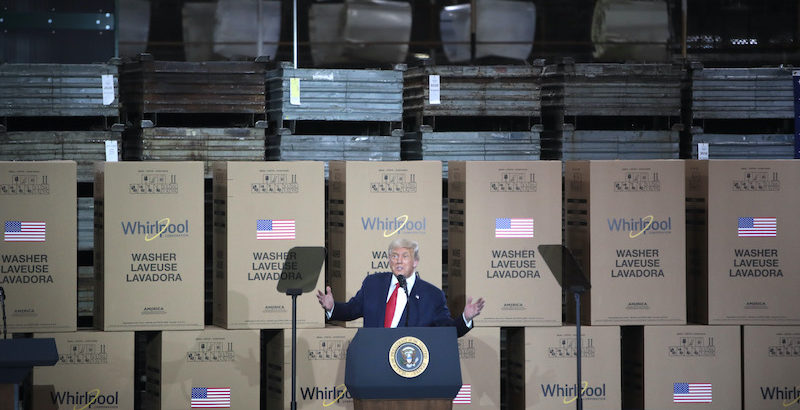 Blackout Necessary?  Connection To POTUS’ Shelter?  What Does It All Mean? 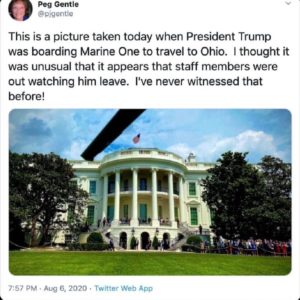 Yesterday, President Trump indicated this may be the last time we see him for a while.

Coincidentally, there was a major blackout in Manhattan this morning. We’ve seen blackouts before. Q has told us, ‘Blackout necessary.’  Are special ops taking place? Dark to Light!

As POTUS was boarding Marine One to travel to Ohio, why was his staff was all watching him leave? This is unusual, perhaps more than a blackout? We know POTUS is well-insulated.

As President Trump was speaking to the people at the Whirlpool Corporation, Aug. 6, 2020,  his backdrop were boxes… 17 of them!

Pulling all this together: His staff was all there to say, ‘goodbye,’ as though he would be gone for awhile. He flew to the Whirlpool plant. What happens when you pull the plug on a sink… it drains, forming a whirlpool. Could this all be a metaphor for draining the swamp? There were exactly 17 boxes behind him for a backdrop. In his speech, he indicated this may be the last time we see him for awhile.  There was a major blackout in New York. Did Trump set the stage to drain the swamp?

How many coincidences do we need before we believe?

“Imagine the frustration if we weren’t here communicating w/ you.
You are many tens of millions strong (Q).
Let your VOICES BE HEARD.
Information is meant to be FREE.
POWER TO THE PEOPLE.
Q “

President Donald Trump, during his visit to the crucial battleground state of Ohio on Aug. 6, laid out an economic plan with six promises to U.S. workers if he is reelected for a second term in November.

Addressing a crowd of workers a Whirlpool manufacturing facility in northwest Ohio, Trump unveiled his second term economic agenda as he pledged to make the United States “more prosperous and resilient than ever before.”

“Today, to define our path forward, I’m making our incredible workers six more promises that I will keep over the next four years, and I’m very proud to make them at your plant and in the state of Ohio,” the president said.

Ohio is a critical swing state that Trump won in 2016 by 8 percentage points. Polling shows a tight race with presumptive Democratic nominee Joe Biden in the state ahead of this year’s Nov. 3 presidential election.

Trump trails the former vice president in national polls and is competing with him for blue-collar working-class voters.

The president vowed Thursday that the United States will “defeat” the CCP (Chinese Communist Party) virus, which has caused economic pain nationwide and left millions out of work. In mid-July, 31.3 million people across the country were receiving unemployment checks.

“We have made tremendous strides,” he said. “We are attacking the virus from every angle and through this aggressive strategy, we will win the war and it will happen sooner than people think.”

The president highlighted his administration’s efforts to increase the domestic production of personal protective equipment such as gloves, gowns, respirators.

In his second pledge, Trump said he would, if reelected, rebuild American manufacturing.

“My second promise to you is this,” he said. “We will rise from the current adversity of this horrible invisible enemy and we will be more prosperous and resilient than ever before.”

Trump said the Defense Production Act would be used to mobilize the country’s industrial capacity, while low taxes and fewer regulations would maintain a climate for growth.

He stressed the importance of not being reliant on China, and other nations across the globe, for medical manufacturing, making reference to the CCP virus pandemic.

“We cannot rely on China and other nations across the globe that could one day deny us products in a time of need,” Trump said, as he promised third to turn America into the “premier medical manufacturer, pharmacy, and drugstore of the world.”

On the same day, the president signed an executive order aimed at boosting U.S. production of medicines and medical equipment, lowering drug prices, and protecting the United States against shortfalls in a future pandemic.

The president said in his fourth and fifth promises he would bring millions of manufacturing jobs back to the United States, and that he would bring back American jobs in factories.

“My fourth promise to American workers: Beyond our medical supply chains, over the next four years, we will onshore millions of new manufacturing jobs, across many other critical sectors that are vital to our national security and prosperity,” he said.

He added that items such as electronics, machines, tools, air and space parts, vehicles, and iron and steel need to be domestically manufactured in order for the United States to be secure.

Trump said he would use “every tool” at his disposal, including tariffs, to fight for fair trade, noting that he had signed a ten percent aluminum tariff on Canada to protect U.S. industry from a “surge” in imports.

The step was “absolutely necessary to defend our aluminum industry,” he said.

“To be a strong nation, America must be a manufacturing nation and not be led by a bunch of fools,” he said. “That means protecting our national industrial base.”

In his sixth and final promise, as he wrapped up his speech, Trump vowed to “put American workers first, always.”

“Over the last four years, we’ve made extraordinary strides, and over the next four years together, we will turn the United States into the unrivaled manufacturing superpower of the world. We’ve been through a lot together.”