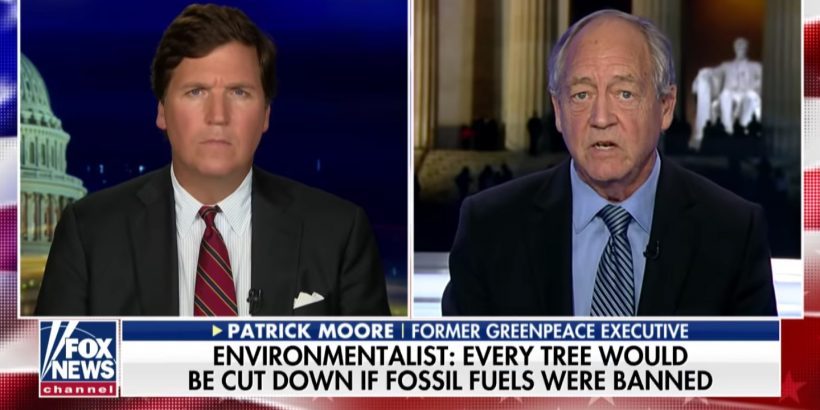 Language is manipulated to invoke negativity, fear, and compliance in order for proponents of environmental catastrophes to push their narratives, Patrick Moore said.

Lead photo does not link to a video.

The co-founder of Greenpeace says in his new book that alleged environmental catastrophes and threats are based on subjects that are either invisible or extremely remote in order to create fear, forcing people to rely on experts to tell them the truth.

“It dawned on me that the great majority of scare stories about the present and future state of the planet, and humanity as a whole, are based on subjects that are either invisible, like CO2 and radiation, or extremely remote, like polar bears and coral reefs,” wrote Patrick Moore, co-founder of Greenpeace, in his book titled “Fake Invisible Catastrophes and Threats of Doom.”

“Thus, most people have no way of determining the truth of these claims of alleged catastrophes and doomsday threats. Instead, they must rely on the activists, the media, the politicians, and the scientists—all of whom have a very large financial and/or political stake in the subject—to tell them the truth.”

Moore, also a senior fellow with the Frontier Centre for Public Policy, said he left Greenpeace after 15 years when he realized the movement had taken “a sharp turn to the political left.”

During a webinar on May 20, he said the main purpose of writing the book was to show that those narratives are “just a big hoax.”

Language is manipulated to invoke negativity, fear, and compliance in order for proponents of environmental catastrophes to push their narratives, Moore said.

“A classic example of propaganda is ‘dirty oil,’” he noted. “That’s how we grow our food—in dirt. So what’s wrong with dirty? But they’re not using it to mean dirt as in soil. They’re using it to mean ‘dirty rotten scoundrel.’ In other words, it’s purely an epithet—a negative epithet.”

Moore said that kind of wording has nothing to do with scientific description or the actual quality of oil. Rather, it’s an example of a propaganda technique where a normal concept is merged with an undesirable idea in order to make something seem bad.

“Much of propaganda is about associating negative words with normal words, and therefore turning them into a negative,” he said.

“This welcomes the opportunity to invent narratives such as the claim that ‘CO2 emissions from burning fossil fuels are causing climate emergency,’” he writes in his book.

But Moore said the amount of CO2 has been declining in the global atmosphere for at least half a billion years based on historical records.

In his testimony before the U.S. Senate Environment and Public Works Committee’s Subcommittee on Oversight in 2014, Moore argued that although there is some correlation, there is little evidence to support a direct causal relationship between CO2 and global temperature through the millennia.

“The fact that we had both higher temperatures and an ice age at a time when CO2 emissions were 10 times higher than they are today fundamentally contradicts the certainty that human-caused CO2 emissions are the main cause of global warming,” he testified at the time.

The book also addresses the issue of coral reefs reported to be dying allegedly due to climate change warming the oceans. Moore explains in the book that the most diverse coral reefs are found in the world’s warmest oceans, in a roughly triangular-shaped region in the western Pacific Ocean known as the Coral Triangle. The region extends from the Philippine Archipelago in the north to the Indonesia Archipelago in the south and extends east to the seas around the Solomon Islands.

The Coral Triangle has the world’s “highest biodiversity of coral, with more than 600 species, which is 76 percent of all coral species,” the book states. It adds that the region also has the “highest biodiversity of reef fish, with 2,000 species, which is 37 percent of all reef-fish species,” and is “home to six of the world’s seven species of marine turtles.”

“In other words, they found no evidence that there is anywhere in the world’s oceans that indicates a decline in species richness due to warmer ocean water,” Moore writes, referring to a research paper on global marine species diversity and the factors that influence higher or lower diversity.

“They found the opposite, that the warmest waters in the world have the highest species diversity for every taxonomic class of marine life.”

His book, “Fake Invisible Catastrophes and Threats of Doom,” also seeks to dispel what Moore calls the “unified theory of scare stories.” They include the Great Pacific Garbage Patch in the North Pacific, which has a high concentration of microplastic debris and is said to be twice the size of Texas; polar bears being threatened with extinction due to climate change; and ocean acidification.

The book is published by Ecosense Environmental Inc. and is available on Amazon.