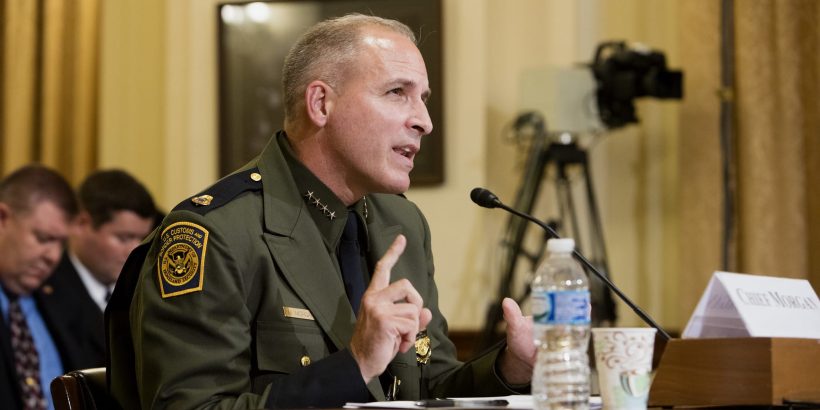 The southwest border during President Joe Biden’s first year in office reached historic levels of illegal crossings, pulling agents off the front line and leaving large swaths of the border unpatrolled. Drugs, especially fentanyl, flowed in, and overdose deaths are at an all-time high.

“We have lost control of the southwest border.”

During the 2021 calendar year, Border Patrol agents apprehended close to 2 million illegal immigrants from 150 different countries along the southwest border—more than double 2019, the last pre-pandemic year, according to CBP data.

“That’s the equivalent to the size of the state of Vermont,” he said. “Think about the bad people that are in that 600,000 that got away.”

Mexican nationals made up 28 percent of encounters in fiscal year 2021, the lowest proportion in recorded history, according to CBP.

The northern triangle countries of Guatemala, Honduras, and El Salvador made up 44 percent, and the remaining 28 percent were from other countries—double the previous record for the latter demographic.

“This trend is important because the Department of Homeland Security does not currently have agreements to electronically verify nationality with these different countries of origin, making removing or expelling their nationals more resource-intensive and time-consuming,” CBP stated in a press release on Jan. 3.

Outside of Mexico and the Northern Triangle nations, the countries accounting for the largest number of encounters in fiscal year 2021 were Ecuador, Brazil, Nicaragua, Venezuela, Haiti, and Cuba, CBP said.

On the Mexico side of the border, across the Rio Grande in Texas, hundreds of discarded passports, visas, and identification papers can be found every day. Illegal aliens are told it’s harder to be deported from the United States without papers.

“This is not a surge. This is an invasion,” Morgan said. “I mean, this is a catastrophic amount of illegal aliens trying to break into our country.”

The result in some border areas, he said, is that most Border Patrol agents are being pulled off the “national security mission” to be “daycare providers, processing agents, and bus drivers.”

Morale among the Border Patrol workforce is at an all-time low.

Upon taking office almost a year ago, President Joe Biden was quick to dismantle several key border security initiatives that the Trump administration had established, including a halt to border wall construction, and the Remain in Mexico program, which attributed to up to an 80 percent drop in “catch-and-release” by requiring asylum-seekers to wait in Mexico until their final court judgement.

Now, instead of waiting in Mexico, most illegal immigrants are released into the United States to wait for future court dates that can be set years into the future.

Although the public’s main focus is on illegal immigration numbers, Morgan said that’s just a subset of border security.

“Anytime you’re so overwhelmed that you can’t perform the fundamental national security mission to secure our borders, the result [is] that every aspect of our nation’s public health, public safety, and national security is being impacted.”

The record numbers in 2021 occurred during a year in which many Americans, under the backdrop of a pandemic, faced vaccine mandates, work-from-home orders, and school closures.

Overcrowded border facilities were unable to test everyone for COVID-19, resulting in the release of illegal immigrants with the disease into communities. In July 2021, the city of Laredo sued the Biden administration for releasing a “flood” of illegal immigrants into Laredo, causing “irreparable harm.”

Under the Title 42 public health order, which was instituted in March 2020, illegal immigrants could be quickly expelled back into Mexico as a pandemic precaution, rather than be processed under Title 8 immigration law, which is a much more protracted process inside the United States.

Since March 2021, however, Title 42 has slowly been whittled down—first to allow in all unaccompanied children, then families with children under 7, then most families in general, most single females, and single adults from non-Spanish speaking countries.

Morgan predicts the southwest border metrics will continue to worsen through 2022.

“There’s no end in sight. There’s none. And this administration, every single day, everything they’re doing is just to get better at releasing people. They’re not trying to stop the flow,” he said.

Biden tapped Vice President Kamala Harris to lead border security efforts, with the main focus being to address the “root causes” of illegal immigration. Harris visited Mexico and Guatemala last year, but was criticized by the Guatemalan president in December for having no communication since June 2021.

On Aug. 26, the Supreme Court ordered the Biden administration to restart the Remain in Mexico program, but CBP data through November 2021 doesn’t indicate any new enrollees in the program.

Department of Homeland Security Secretary Alejandro Mayorkas has said he is working toward building a “safe, orderly, and humane immigration” system.

During the tail end of the September crisis that saw close to 15,000 mostly Haitian illegal immigrants gather under the international bridge in Del Rio, Texas, Mayorkas denied that the administration’s policies were responsible.

“What we are learning from our interviews with individuals is that they are receiving false information and misinformation from the smuggling organizations that traffic in the exploitation of vulnerable individuals,” Mayorkas said during a congressional hearing on Sept. 21, 2021.

During a Senate hearing in November 2021, Mayorkas gave himself high marks for his role in leading the border efforts.

“I’m a tough grader on myself and I give myself an ‘A’ for effort, investment in mission, and support of our workforce,” Mayorkas said.

Morgan accused Mayorkas of creating a “sanctuary country” for illegal immigrants, allowing them to come in and then shielding them from deportation.

“Everything that they’re doing is making our border less secure and our country less safe.”

Republicans are also complicit, he said, because they still believe that this country needs the illegal workforce.

“But there is a true marginalized American workforce that’s out there that’s having to compete with companies paying lower wages to illegal immigrants. That’s real,” Morgan said.

He said concerned Americans should push their governors to do more in the immediate term, instead of waiting for the federal elections. Morgan said Florida, Texas, and Missouri have made some inroads, but more need to step up.

“If you have a meth overdose in your state, I guarantee that meth came from the southwest border,” he said.

“The cost to American taxpayers is unconscionable and governors should step up and say enough is enough.”