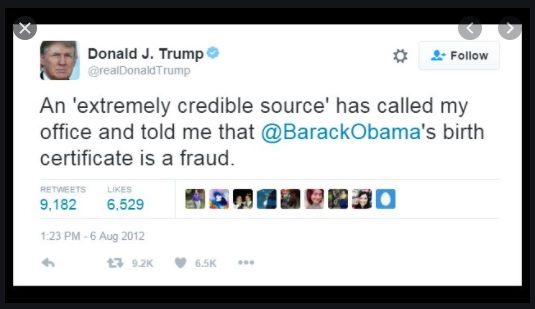 In his controversial new book on the 2020 election, Battle For The Soul: Inside the Democrats’ Campaigns to Defeat Donald Trump. Edward-Isaac Dovere repeats a canard that has become something of a staple of Democratic mythology.

According to Dovere, in November [2016], then-president Barack Obama had a hard time making sense out of Hillary Clinton’s loss “to a man he thought of as a moronic carnival barker.”  Dovere traced Obama’s grudge against Donald Trump to the birth certificate issue.

Obama, writes Dovere, “would never forgive [Trump] for turning a fringe obsession with his birth certificate into an issue he’d had to address from the White House briefing room in 2011.”

Dovere errs on several counts.  Trump was not the one who turned the birth certificate into an issue.  Obama was.  Nor did Obama have to address the issue from the White House.  He could have easily settled it in his attorney’s office three years earlier.  More importantly, perhaps, it was not the birth certificate that provoked Obama’s wrath.  It was Trump’s ability to see Obama the same way Obama saw himself — as a fraud.

In the way of background, a week prior to the 2008 Democratic National Convention, attorney Philip Berg filed a federal suit in the Eastern District of Pennsylvania challenging Obama’s constitutional eligibility to be president.  A Democrat and former deputy attorney general for the Commonwealth of Pennsylvania, Berg expected to be taken seriously.  He wasn’t.  The media expressed zero interest in his suit.

“I was deprived of my due process rights to be heard,” Berg would later write.  “Judge Surrick made some outlandish comments claiming Obama had been properly vetted, and that was completely untrue.”  Berg’s claim here is accurate.  The media’s failure to investigate Obama’s background is a scandal in its own right.  Bauer, though, had done his job.  The day after the suit was dismissed, the word leaked out that he would be taking over as White House counsel.

Berg would file additional suits, as would others.  He simply requested to see some basic information about Obama, most notably his passport applications and his birth certificate.  With little in the way of explanation, Obama’s attorneys resisted at every turn.  These attorneys included not only Bauer and other private attorneys, but also U.S. attorney general Eric Holder.  “What a tragedy,” writes Berg in a self-published book, “that our government with an opportunity to resolve this issue one way or the other, did not do so to protect Obama.”

A Hillary-supporter, Berg was hardly a Republican pawn.  If he were a racist, his lifetime membership in the NAACP made for good cover.  He argues that his primary goal in challenging Obama was to defend the Constitution.  There is no reason to disbelieve him.

Obama does not mention Berg in his 2020 memoir, A Promised Land.  He does not have to.  He is writing for an audience that has no idea who Berg is and that thinks of the word “birther” as a synonym for White supremacist.

Birtherism remained in the shadows until Donald Trump cast some light on the issue beginning with his speech at the Conservative Political Action Committee (CPAC) convention in February 2011.

“Our current president came out of nowhere, came out of nowhere,” said Trump.  “In fact, I’ll go a step further.  The people who went to school with him, they never saw him; they don’t know who he is.  It’s crazy.”  This is the only section of Trump’s speech Obama quotes in A Promised Land.

In A Promised Land, Obama takes undue offense at Trump’s speech.  “I’d noticed,” he writes, “how the mood we’d first witnessed in the fading days of Sarah Palin’s campaign rallies and on through the Tea Party summer had migrated from the fringe of GOP politics to the center — an emotional, almost visceral, reaction to my presidency.”  No, what is visceral here is Obama’s paranoia.

What attracted Trump to the birther issue was not Obama’s race, but his inexplicable resistance to sharing his birth certificate.  If Obama were born in Hawaii on August 4, 1961, there would have been no reason not to share it.  In my own forthcoming book, Barack Obama’s Promised Land: Deplorables Need Not Apply, I argue that Obama was hiding not the “where” of his birth, but the “when.”  Although this argument is speculative, Obama’s behavior strongly suggests he was hiding something.

“Finally I decided I’d had enough,” writes Obama.  He called consigliere Bauer and told him “to go ahead and obtain the long-form birth certificate from its home in a bound volume, somewhere deep in the bowels of the Hawaii Vital Records office.”  According to official White House documents, Judith Corley, also of Perkins Coie, was dispatched to Hawaii to bring back “two certified copies of your original Certificate of Live Birth.”

On the morning of Wednesday, April 27, Obama walked to the podium in the White House briefing room and shared the results of the Perkins Coie research.  Obama writes, “I began by remarking on the fact that the national TV networks had all decided to break from their regularly scheduled programming to carry my remarks live — something they very rarely did.”

Yes, very rarely.  The last comparable breakaway for a personal matter took place on July 25, 1969, when the networks gave Ted Kennedy fifteen minutes to assure America there was “no truth whatsoever” to rumors of immoral conduct between him and the late Mary Jo Kopechne.

“Now, this issue has been going on for two, two and a half years now,” said Obama disingenuously.  “I think it started during the campaign.  And I have to say that over the last two and a half years I have watched with bemusement, I’ve been puzzled at the degree to which this thing just kept on going.”

Obama knew when it had started.  He knew very well that Bauer and other attorneys had been fighting off legal challenges since Philip Berg first filed suit in August 2008.  At the briefing, he skipped those details.  He did say, however, “We’re not going to be able to solve our problems if we get distracted by sideshows and carnival barkers.”  Obama did not have to name the carnival barker.  The media knew he meant Donald Trump.

Obama was not finished with Trump.  Immediately after the press briefing, he flew to Chicago to mock Trump some more on the Oprah show.  During the next two days, Obama’s young gag-writers were busily working on his presentation for the upcoming White House Correspondents’ Dinner.  Donald Trump was to be in the audience.  The Washington Post had invited Trump in much the spirit Michael Corleone would one day invite brother Fredo to go boating with him.

In 2016, Trump had the last laugh — despite the best efforts of Obama and Perkins Coie.  In April 2016, when the DNC learned that its computers had been hacked, its staff alerted Perkins Coie, and the firm, in turn, recommended a private cyber-security outfit called CrowdStrike to clean up the mess.  No need to bring in the FBI.  That same memorable year, 2016, Perkins Coie retained Fusion GPS to create the infamous Steele dossier.

Not to be a conspiracy theorist, mind you, but I would suggest that a firm capable of commissioning the Steele dossier would have no trouble dummying up a birth certificate.  Just sayin’.