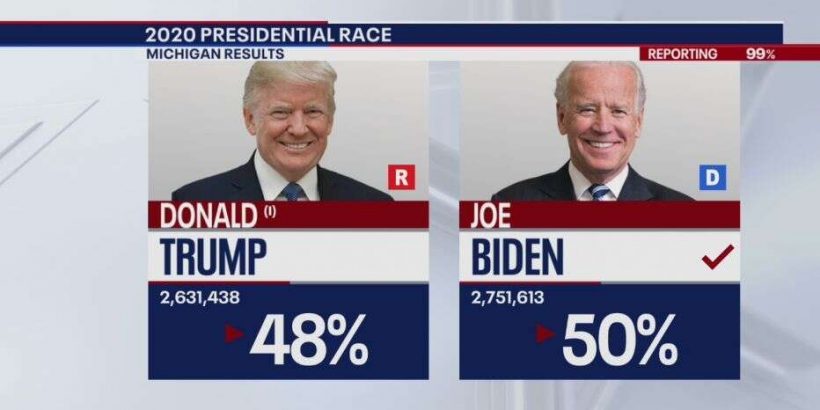 A Michigan Senate panel controlled by Republicans said in a new report that it found no evidence of “widespread or systematic” fraud in the 2020 election.

The Michigan Senate Oversight Committee said in the 55-page document that it investigated the election by hearing public testimony, reviewing countless documents and presentations, and carefully reviewing the elections process itself.

“This Committee found no evidence of widespread or systematic fraud in Michigan’s prosecution of the 2020 election,” it said.

“At this point, I feel confident to assert the results of the Michigan election are accurately represented by the certified and audited results,” Sen. Edward McBroom, a Republican who chairs the panel, added in a note.

The committee claimed to have “exhausted every resource available to it” to examine fraud allegations, although it cautioned that the report shouldn’t be considered exhaustive because it was limited in some ways. For example, members said they researched claims that dead people and nonresidents voted and found only two claims to be true.

McBroom declared that theories about what happened in Antrim County, which say that unofficial results after the election falsely stated that Democrat Joe Biden received more votes than then-President Donald Trump, were probed and dismissed.

“All compelling theories that sprang forth from the rumors surrounding Antrim County are diminished so significantly as for it to be a complete waste of time to consider them further,” he wrote.

A team of experts hired by William Bailey, a resident of the county, said they discovered flaws in Dominion Voting Systems machines, which are used by various parts of Michigan to carry out elections. But Dominion and state officials denied the team’s findings and a judge tossed the case last month.

Members of the Senate panel also concluded that there are “severe weaknesses in our elections system,” such as a “lack of clarity in the tabulation of ballots, unnecessary barriers to ensuring that every lawfully cast ballot is counted, [and] inconsistent poll worker or challenger training.”

The weaknesses should compel the legislature to act by reforming election laws, they said. The Michigan Senate passed legislation to add voter identification requirements earlier this month.

Michigan Sen. Jeff Irwin, the sole Democrat on the panel, didn’t sign onto the report. He told a hearing on June 23 that he appreciated the report’s conclusions, calling them “a very clear rebuke of the election claims here in Michigan.”

The committee called for Michigan Attorney General Dana Nessel, a Democrat, to “consider investigating those who have been utilizing misleading and false information about Antrim County to raise money or publicity for their own ends.”

“The Committee finds those promoting Antrim County as the prime evidence of a nationwide conspiracy to steal the election place all other statements and actions they make in a position of zero credibility,” the committee said in the report.

“We will review the report in its entirety in order to determine if a criminal investigation is appropriate,” Lynsey Mukomel, press secretary for the office, told The Epoch Times in an email.

The report was released as teams in Arizona’s largest county approach the end of a forensic audit there. The teams expect to release their report in August.

Delegations from over a dozen states, including Michigan, have visited the Maricopa County audit, and many officials have expressed interest in having their states’ election results audited. State Rep. Steve Carra, a Republican, introduced a bill on June 22 that would authorize a statewide audit to be conducted by an outside corporation.

“A thorough, bipartisan review will help us identify what works, what doesn’t, and how to make our elections secure and accessible for every Michigan voter,” Carra said in a statement. “I know my colleagues on both sides of the aisle care about secure elections that the voters can trust; my plan will help ensure Michigan elections are fair, honest and accurate.”

State Sen. Mike Shirkey, the Michigan Senate’s majority leader, said last week that he was “watching carefully” what comes out of the Arizona audit, saying, “We’ll see where that might lead.”

McBroom said in the report’s introduction that “another audit, a so-called forensic audit, is not justifiable,” claiming that the post-election review and risk-limiting audit that Michigan already completed are “far more substantive than Arizona’s standard audit.”

However, he said, “I am keeping a close eye on the legislatively-initiated forensic audit in Arizona and will continue to ask questions regarding other election issues I feel are not settled.”

People dropped off thousands of affidavits at the Michigan Capitol last week that they said requested lawmakers order a forensic audit. And the Cheboygan County Board of Commissioners voted this week to authorize a hand recount of the 2020 election. Michigan Secretary of State Jocelyn Benson, a Democrat, in the past warned the county’s clerk against letting outside entities have access to voting equipment.