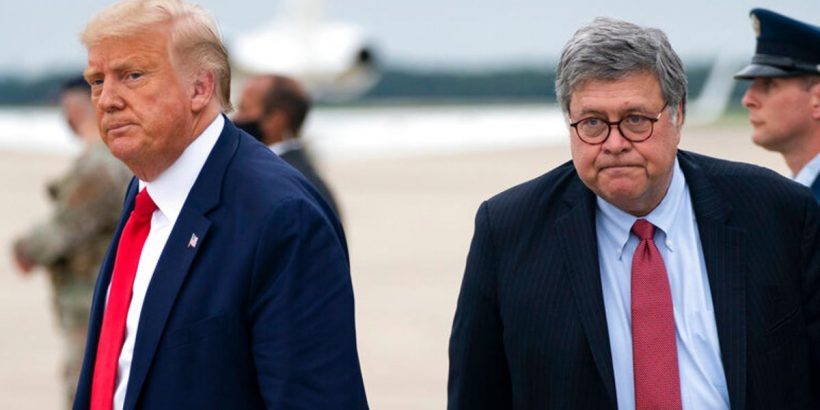 Barr made the remarks in an upcoming book from ABC News reporter Jonathan Karl, who claimed the relationship between Trump and Barr deteriorated last year.

“Bill Barr was a disappointment in every sense of the word,” Trump said in a statement late on Sunday. “Besides which, Barr, who was Attorney General (lawyer) shouldn’t be speaking about the President.”

Trump then characterized Barr as a weak attorney general who didn’t act on key issues.

“Instead of doing his job, he did the opposite and told people within the Justice Department not to investigate the election,” Trump said. “Just like he did with the Mueller report and … RUSSIA RUSSIA RUSSIA, they don’t want to investigate the real facts. Bill Barr’s weakness helped facilitate the cover up of the Crime of the Century, the Rigged 2020 Presidential Election!”

Statement by Donald J. Trump, 45th President of the United States of America

“RINO former Attorney General Bill Barr failed to investigate election fraud, and really let down the American people. Even the scam that took place in Georgia of ballot stuffing on camera, he couldn’t see what was wrong with it. Just like he failed to understand the Horowitz report and let everyone down with respect to getting a timely investigation (where’s Durham?) on all of the corruption of the Obama-Biden Administration.

It’s people in authority like Bill Barr that allow the crazed Radical Left to succeed. He and other RINOs in the Republican Party are being used in order to try to convince people that the election was legitimate when so many incredible facts have now come out to show conclusively that it wasn’t.

He came in with a semi-bang and went out with a whimper. Earlier in his term Bill Barr went ballistic on CNN with Wolf Blitzer warning Democrats were changing election rules to flood the system with mail-in ballots that “as a matter of logic” are “very open to fraud.” They are, and Bill Barr did nothing about it.

If there was no fraud, why are Arizona, Georgia, Wisconsin, Pennsylvania, and other States spending so much time and effort on exposing the fraud? We already know that:

• 101,789 “obsolete” voters on the rolls in Georgia, including 18,486 dead people
• Ballot batches off by up to 17.5 percent in Maricopa County, Arizona
• “Massive” chain of custody problems with drop boxes in Georgia, missing hundreds of thousands of records for months after the election
• Thousands of ballots “wheeled in through the back door” in Fulton County days after the election
• “Double feeding” ballots in Fulton County, Georgia
• Nearly 200,000 illegal “indefinitely confined” votes in Wisconsin that violated Voter ID law
• “Cash for votes” scheme in Nevada
• Illegal alien votes
• Election law changes were not authorized by the State Legislatures, which is mandated by the U.S. Constitution

If he felt this way, why did Barr say he was “greatly honored” and “proud to have played a role in the many successes and unprecedented achievements you have delivered for the American people” in the final letter he wrote to me? He said, “Few could have weathered these attacks, much less forge ahead with a positive program for the country.”

Now it was revealed that Barr was being pushed to tell lies about the election by Mitch McConnell, another beauty, who was worried about damaging the Republicans chances in the Georgia runoff. What really damaged the Senate Republicans was allowing their races to be rigged and stolen, and worse, the American people to no longer believe their vote matters because spineless RINOs like Bill Barr and Mitch McConnell did nothing.

Bill Barr was a disappointment in every sense of the word. Besides which, Barr, who was Attorney General (lawyer) shouldn’t be speaking about the President. Instead of doing his job, he did the opposite and told people within the Justice Department not to investigate the election. Just like he did with the Mueller report and the cover up of Crooked Hillary and RUSSIA RUSSIA RUSSIA, they don’t want to investigate the real facts. Bill Barr’s weakness helped facilitate the cover up of the Crime of the Century, the Rigged 2020 Presidential Election!”

Trump was referring to the unremitting allegations—starting from when he was elected president in 2016—that his campaign colluded with Russia. Former special counsel Robert Mueller found no link between his campaign and the Kremlin, although numerous Democrats and left-wing TV hosts continued to repeat the mantra that he was working for Russian leader Vladimir Putin.

Barr used an expletive to describe Trump’s allegations of voter fraud during the Nov. 3 contest.

“If there was evidence of fraud, I had no motive to suppress it. But my suspicion all the way along was that there was nothing there,” the former attorney general said. “It was all [expletive],” he added.

According to Barr in the excerpts of the book, Senate Republican Leader Mitch McConnell (R-Ky.) had urged Barr to push back against Trump’s remarks about fraud. Ultimately, in late December of last year, Barr resigned, although he touted his record under the administration.

In his Sunday statement, Trump called Barr—who had also been appointed attorney general under former President George H.W. Bush—as a “RINO,” or Republican in name only, who had “really let down the American people.”

The former president also made note of Barr’s resignation letter, where the former attorney general said he was “greatly honored” to serve in the administration. He also highlighted “the many successes and unprecedented achievements you have delivered for the American people. Your record is all the more historic because you accomplished it in the face of relentless implacable resistance.”