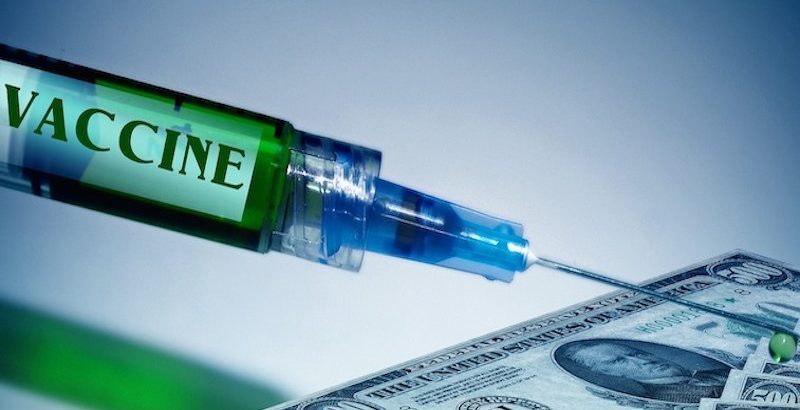 Research suggests vaccine-linked COVID variants could be a problem.

Despite media reports suggesting unvaccinated people will drive mutations of SARS-CoV-2 (or the CCP virus, which causes COVID-19), actual research suggests that more dangerous mutations of the virus could come from the specific nature of the vaccines now being used around the world. Half of Americans have declined the vaccine.

Only 49 percent of Americans more than 18 years of age are fully vaccinated, with 56 percent having received one dose of the two-dose Moderna and Pfizer vaccines.

Some media reports are claiming these unvaccinated people are serving as viral factories for more dangerous variants of the virus. But this false narrative hides the fact that mass vaccinations may be putting us all in a far more dire situation than necessary.

Viral mutation as a consequence of vaccination came to wide public attention in 2018, when Quanta magazine wrote about Andrew Read’s research into Marek’s disease among chickens. The article, “Vaccines Are Pushing Pathogens to Evolve,” described how “just as antibiotics breed resistance in bacteria, vaccines can incite changes that enable diseases to escape their control.”

The article details the history of the Marek’s disease vaccine for chickens, first introduced in 1970. Today, we’re on the third version of this vaccine, as it stops working within a decade. The reason? The virus had mutated to evade the vaccine. Worse, research suggests this kind of vaccine-induced mutation seems to result in increasingly deadly viruses that are more difficult to treat.

Read’s 2015 paper in PLOS Biology, “Imperfect Vaccination Can Enhance the Transmission of Highly Virulent Pathogens,” shared the results of an experiment that vaccinated 100 chickens against Marek’s disease and left 100 unvaccinated. All of the birds were then infected with varying strains of the virus. Some strains were more virulent and dangerous than others.

“The findings suggest that the Marek’s vaccine encourages more dangerous viruses to proliferate. This increased virulence might then give the viruses the means to overcome birds’ vaccine-primed immune responses and sicken vaccinated flocks.”

Vaccinated People Can Serve as Breeding Grounds for Mutations

In a piece titled “Vaccines Could Drive The Evolution Of More COVID-19 Mutants,” National Public Radio reported on Feb. 9, that “vaccines can contribute to virus mutations.”

Part of the concern is whether the people delaying their second dose of vaccine will become a particularly effective host population for viral mutations.

“They might serve as sort of a breeding ground for the virus to acquire new mutations,” said Paul Bieniasz, a Howard Hughes investigator at Rockefeller University.

This is the exact claim now being attributed to unvaccinated people by those who don’t understand natural selection.

It’s important to realize that viruses mutate all the time, and if you have a vaccine that doesn’t block infection completely, then the virus will mutate to evade the immune response within that person. That’s one of the distinct features of the COVID-19 shots—they aren’t able to block infection. They allow infection to occur and work to lessen the symptoms of that infection.

This is true of other viruses as well, though the phenomenon isn’t considered nearly as dangerous as what occurs among bacteria.

“We’re not going to fall off a cliff tomorrow in terms of vaccine efficacy. What we’re likely to see is a slow, steady erosion of efficacy over, perhaps, quite a long period of time,” Bieniasz said.

If SARS-CoV-2 does end up mutating into more lethal strains, then mass vaccination is the most likely driver of that mutation.

Despite the scenario outlined above, the fearmongering that mass media are stirring over variants is just that: fearmongering. So far, while some SARS-CoV-2 variants appear to spread more easily, they’re also less dangerous. The Delta variant, for example, is associated with more conventional flu-like symptoms, such as a runny nose and sore throat, than the hallmark COVID-19 symptoms involving shortness of breath and loss of smell.

In an interview for the documentary “Planet Lockdown,” Michael Yeadon, a life science researcher and former vice president and chief scientist at Pfizer, pointed out the fraud being perpetrated with regard to variants. He actually refers to them as “simians,” because they’re near-identical to the original. And, as such, they pose no greater threat than the original.

Yeadon notes that the most divergent variant is hardly different from the original.

“If you find the most different variance, it’s 99.7 percent identical to the original one, and I can assure you … that amount of difference is absolutely not possibly able to represent itself to you as a different virus.”

Your immune system is a multifaceted system that allows your body to mount defenses against all sorts of threats. Parasites, fungi, bacteria, and viruses are the main threat categories. Each of these invades and threatens you in completely different ways, and your immune system has ways of dealing with all of them, using a variety of mechanisms.

Whether you’re going to be susceptible to variants has very little to do with whether or not you have antibodies against SARS-CoV-2, because antibodies aren’t your primary defense against viruses, T-cells are. What this means is that getting booster shots for different variants isn’t going to help, because these vaccines don’t strengthen your T-cell immunity.

The importance of T-cells has been known for a long time, and their role in COVID-19 was confirmed early in the pandemic. Scientists wanted to find out if patients who had recovered from SARS-CoV-1, responsible for the SARS outbreak some 17 years ago, might have immunity against SARS-CoV-2. As it turns out, they did.

They still had memory T-cells against SARS-CoV-1, and those cells also recognized SARS-CoV-2, despite the two viruses being only 80 percent similar. Now, if a 20 percent difference wasn’t enough to circumvent the immune system of these patients, why should you be concerned with a variant that’s, at most, 0.3 percent different from the original SARS-CoV-2?

“When your government scientists tell you that a variant that’s 0.3 percent different from SARS-CoV-2 could masquerade as a new virus and be a threat to your health, you should know, and I’m telling you, they are lying,” Yeadon said.

“If they’re lying, and they are, why is the pharmaceutical industry making top-up [booster] vaccines? There’s absolutely no possible justification for their manufacture.”

Mutations Are Good for Vaccine Business

Of course, by pushing fear of virus variants, vaccine makers ensure a steady supply of people willing to participate as guinea pigs in their for-profit business model. Pfizer plans to ask the U.S. Food and Drug Administration (FDA) for emergency use authorization for a third COVID-19 vaccine booster shot in August, Bloomberg reports.

According to Pfizer’s head of research, Dr. Mikael Dolsten, initial data suggest a third dose of the current Pfizer vaccine can raise neutralizing antibody levels by anywhere from five-fold to 10-fold. The company is also working on variant-specific formulations.

Dolsten points to data from Israel, where Pfizer’s mRNA injection was used exclusively and is showing a recent uptick in breakthrough cases. This suggests protection starts to wane around the six-month mark. For now, the FDA isn’t recommending boosters, but that can change at any moment and most likely will.

Pfizer recently announced that it intends to raise the price on its COVID-19 vaccine once the pandemic wanes, and during a recent investor conference, Pfizer Chief Financial Officer Frank D’Amelio said there’s “significant opportunity” for profit once the market shifts to annual boosters.

In an April 2021 article, The Defender reported the expected profits from current COVID-19 vaccines and boosters in coming years:

The way things have been going, it seems inevitable that we’re facing a vaccine treadmill, where new variants will “necessitate” boosters on a regular basis. Boosters will also drive the “need” for vaccine passports to keep track of it all. As reported by The Defender:

“Annual COVID booster shots are music to the ears of investors. But some independent scientists warn that trying to outsmart the virus with booster shots designed to address the next variant could backfire, creating an endless wave of new variants.”

These variants could be more virulent and transmissible than their predecessors.

Vaccinologist Dr. Geert Vanden Bosche, whose resume includes work with GSK Biologicals, Novartis Vaccines, Solvay Biologicals, and the Bill & Melinda Gates Foundation, published an open letter to the World Health Organization on March 6. In that letter, he warned that implementing a global mass vaccination campaign during the height of the pandemic could create an “uncontrollable monster,” with evolutionary pressure forcing the emergence of new and potentially more dangerous mutations.

“There can be no doubt that continued mass vaccination campaigns will enable new, more infectious viral variants to become increasingly dominant and ultimately result in a dramatic incline in new cases despite enhanced vaccine coverage rates. There can be no doubt either that this situation will soon lead to complete resistance of circulating variants to the current vaccines,” Bossche wrote.

Will COVID-19 Vaccines Save Lives? Probably Not

As noted in the BMJ paper, “Will COVID-19 Vaccines Save Lives? Current Trials Aren’t Designed to Tell Us,” by associate editor Peter Doshi, while the world is betting on gene modification vaccines as the solution to the pandemic, the trials aren’t even designed to answer key questions, such as whether the vaccines will actually save lives.

If there’s a silver lining to this whole mess, it’s that more and more people are starting to get educated about health, biology, virology, and vaccinology. These are heady topics, but to begin to tease out the truth from fiction, many are now taking the time to listen to doctors and scientists who are explaining the science behind it all.

Dr. Joseph Mercola is the founder of Mercola.com. An osteopathic physician, best-selling author, and recipient of multiple awards in the field of natural health, his primary vision is to change the modern health paradigm by providing people with a valuable resource to help them take control of their health. This article was originally published on Mercola.com