COMMUNIST CHINESE INFLUENCE IN AUSTRALIA
Excerpt from Clive Hamilton book “SILENT INVASION” ONE OF THE BEST READS IN A LONG TIME WHAT IS HAPPENING IN AUSTRALIA IS OR WILL BE HAPPENING IN OTHER PARTS OF THE WORLD.

In 2008 Clive Hamilton was at Parliament House in Canberra when the Beijing Olympic torch relay passed through. He watched in bewilderment as a small pro-Tibet protest was overrun by thousands of angry Chinese students. Where did they come from? Why were they so aggressive? And what gave them the right to shut down others exercisin 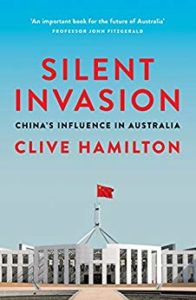 g their democratic right to protest? The authorities did nothing about it, and what he saw stayed with him.

In 2016 it was revealed that wealthy Chinese businessmen linked to the Chinese Communist Party had become the largest donors to both major political parties. Hamilton realized something big was happening, and decided to investigate the Chinese government’s influence in Australia. What he found shocked him. From politics to culture, real estate to agriculture, universities to unions, and even in our primary schools, he uncovered compelling evidence of the Chinese Communist Party’s infiltration of Australia. Sophisticated influence operations target Australia’s elites, and parts of the large Chinese-Australian diaspora have been mobilized to buy access to politicians, limit academic freedom, intimidate critics, collect information for Chinese intelligence agencies, and protest in the streets against Australian government policy. It’s no exaggeration to say the Chinese Communist Party and Australian democracy are on a collision course.

The CCP (Chinese Communist Party) is determined to win, while Australia looks the other way.

Thoroughly researched and powerfully argued, Silent Invasion is a sobering examination of the mounting threats to democratic freedoms Australians have for too long taken for granted. Yes, China is important to our economic prosperity; but, Hamilton asks, how much is our sovereignty as a nation worth? MY STANDPOINT. We are not fools. Not should we ever look at ourselves in that manner even if we seem to be far out to the side on one subject or another. We have too, if we are to think, interrogate, analyze and publish our thoughts. It is in thinking of the impossible that we achieve our greatest moments for it all comes together at once. And what was perhaps a theory or vague idea that becomes reality because we stayed with what we believed in. This is just one example of what I have seen happen in the last 30 years in Australia, but never had a platform or an inclination to ever publish anything until I joined the C-Vine News Group. So again thank you, for providing me with the platform and liberating me from the shackles that have held me silent for so long.

FROM THE ABOVE BOOK Notice how “wealthy Chinese businessmen linked to the Chinese Communist Party had become the “largest donors” to both major political parties”…. The question is obvious as well as the answer. Why donate to both parties? Because should “your” chosen party lose, your donation the becomes worthless. One cannot buy a lost party it as simple as that. Business Men buy and own our politicians, we have seen that time and time again…And the worst of it, is that they are of foreign origins. I question some 20 years ago, when the Chinese street names were also written in Chinese, why was it necessary???? It is a slow indoctrination of the acceptance of a foreign body having control over government decisions. Little by little they take our country, our culture, our laws, and apply their own. I am sorry to say, but it is going to be more important than ever, that every 17-year-old to 30-year-old Australian learns to speak Chinese.

THE FUTURE FOR AUSTRALIA. It will be run by the Chinese and the Australians will be their employees, if they are lucky. (They prefer to employ their own.) Let’s face facts, 20% of the world’s population is Chinese, and Mainland China cannot accommodate them. Chinese growth rate in China is only .6% so apart from the migration of Chinese from China the population growth is also happening exponentially within the borders of other countries, and by more than just one child. I have noticed that even the Chinese tourist “bus tours”, favor their own shops and foods. They are the most parochial of races. This is not meant to be nasty or rude, it is just an observation and I am sure there will be plenty of exceptions. For what it is worth I am French and I can assure everyone who had read this, the French are also very parochial.

TE: This article was posted by our C-VINE team of volunteer workers, investigative reporters, and citizen journalists, who make certain all information is vetted for accuracy before publishing. C-VINE News is placed in a Foundation, also called a Charitable Trust and is run by, “We the People”.