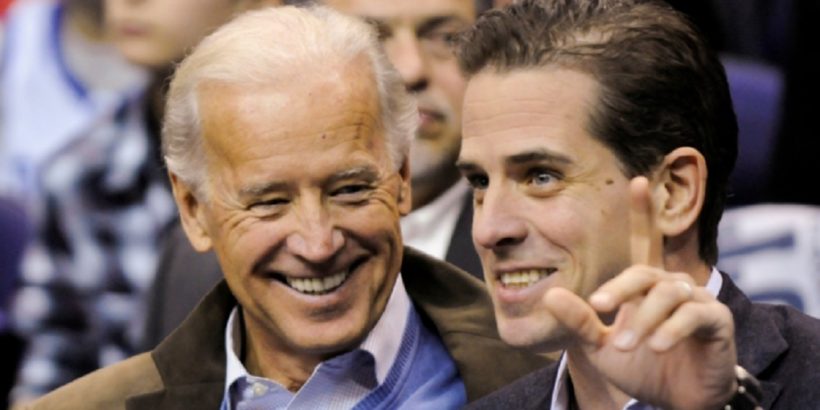 The owner of a computer repair shop who obtained a laptop that allegedly contained emails detailing an opportunity for a meeting between former Vice President Joe Biden and a top Ukrainian business executive found “disturbing” material on it after the New York Post published disputed emails that purportedly were found on Hunter Biden’s laptop, which the campaign has denied.

John Paul Mac Isaac, the owner of the shop, told Fox News that he “can’t be 100 percent sure” it was Hunter Biden who dropped off the computer. The shop owner said he contacted the FBI out of concern but he didn’t elaborate. His claim that it may have been Hunter Biden hasn’t been substantiated.

The New York Post published the purported emails on Wednesday and also posted several photos that appear to be Hunter Biden with his shirt off, smoking cigarettes, and one that appears to show him sleeping next to drug paraphernalia. The newspaper said that former New York City Mayor Rudy Giuliani obtained the laptop and released the emails. An email dated from 2015 purportedly showed an exchange between Hunter and an executive at Burisma Holdings—a firm that was set up by a Ukrainian oligarch and has long been accused of corruption by Ukrainian officials—as Hunter sat on the board of the company.

In the alleged email, Vadym Pozharskyi, an adviser to the board of Burisma, thanked Hunter Biden for introducing him to then-Vice President Joe Biden. Biden was accused of pressuring the Ukrainian government to fire a prosecutor, Viktor Shokin, who was investigating Burisma, although Biden later denied those claims and said the Obama administration had sought his ouster.

“Dear Hunter, thank you for inviting me to DC and giving an opportunity to meet your father and spent [sic] some time together. It’s realty [sic] an honor and pleasure,” the email reads.

“Investigations by the press, during impeachment, and even by two Republican-led Senate committees whose work was decried as ‘not legitimate’ and political by a GOP colleague have all reached the same conclusion: that Joe Biden carried out official U.S. policy toward Ukraine and engaged in no wrongdoing,” the Biden campaign spokesman Andrew Bates said in a statement on Wednesday. “Trump Administration officials have attested to these facts under oath.”

Isaac, who had social media posts that indicate he is a supporter of President Donald Trump, told Fox: “I just don’t know what to say, or what I’m allowed to say. I know that I saw, I saw stuff. And I was concerned. I was concerned that somebody might want to come looking for this stuff eventually and I wanted it out of my shop.”

Isaac said a man who he believes was Hunter Biden dropped off three laptops in April 2019. Only one of the laptops was salvageable, and Isaac said he saw disturbing material. He said the customer didn’t return for the laptop within 90 days and he couldn’t get in contact with him.

“If I’m somebody that has no journalistic ability, no detective ability or investigative ability and I was able to find stuff in a short period of time, somebody else should have been able to find something to show,” Isaac told the news outlet.

In an interview with the Daily Beast, he said he tried to get in touch with the FBI but said, “They approached me.”

“I was afraid, I reached out to some people that I trusted, that could possibly get me in touch with the FBI,” he added. “Then they showed up.”

Isaac also claimed that when the FBI obtained the computer, an agent called him and warned him not to speak to anyone who came asking for the laptop. When he asked who that might be, he said, “Biden, anybody representing Hunter.”

He added that he passed on the computer to Giuliani, although he did not specify whether the FBI returned the laptop to him. “I’m pretty vocal about not wanting to get murdered,” he said. When Isaac was asked about why, he suggested that Biden would want to have him killed.

The Biden campaign hasn’t responded to a request for comment.

An attorney for Hunter Biden told the NY Post that Giuliani “has been pushing widely discredited conspiracy theories about the Biden family, openly relying on actors tied to Russian intelligence.”

Meanwhile, during last month’s debate between Biden and Trump, the former vice president denied any wrongdoing.

“My son did nothing wrong at Burisma. He doesn’t want to let me answer because he knows I have the truth,” Joe Biden said. “His position has been totally, thoroughly discredited—by the media, by our allies, by the World Bank, by everyone.”