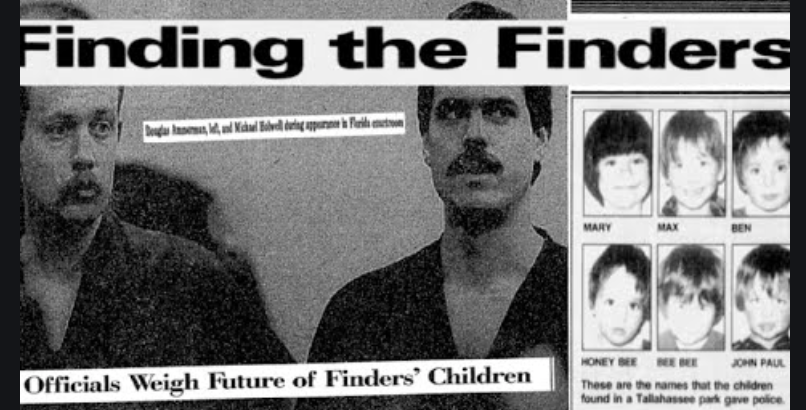 In November 2019, the FBI declassified nearly 650 pages relating to a group known as The Finders. This cult was alleged to be involved with international child trafficking, Satanic worship and mind control techniques. Eventually irrefutable evidence was gathered by the FBI that the State Department and CIA was at minimum complicit, at maximum directly involved, and conspired to cover up investigation and charges. To this day, not a single person has been convicted of a crime in relation to The Finders. You can now decide for yourself whether conviction is warranted.

It all began when six young children, filthy and covered in bug bites and scratches, were reported to police at a park in Tallahassee, Florida. The children were accompanied by two well-dressed men. When the men failed to give proper identification or explain who the parents of the children were, they were arrested and the children were brought in for questioning. The group claimed to be from Washington D.C. Investigators soon discovered The Finders had tentacles not only in different states and corporations, but internationally as well. What would follow is one of the most horrific, shocking tales to ever be told in America, yet mainstream media outlets seem to ignore coverage of the depth of the declassification of these documents. I have read all 650 pages and decided to try to summarize it for easy digestibility (although a topic as heinous as this will never settle well). It’s unquestionable that people have been murdered for trying to expose the tales told in these pages. I believe the great awakening is upon us, and there is no better time than today to expose the evil that lurks in darkness.

Confirmation of the following facts and material can be found at:

The strange men with a herd of young kids were brought in and questioned in Tallahassee and the van they traveled in was impounded. It was noted that one of the men did not cooperate at all, and when questioned appeared to go into a “trance-like state”. Questioning of the children lead to some interesting results. A lot of answers came from the oldest child Mary, as some of the younger ones were non-verbal. When asking Mary what her last name was, she replied, “Which one?” The children seemed unaware of modern technology, electricity, hot water and were curious to even the most simple contraptions such as staplers.

They did not attend school and said the men were their teachers. When asked what the men taught them, the oldest said they are taught “How to play games.” They said they lived with their mothers, although were not allowed *inside* of the house. They lived in the van and in tents. They traveled often, sometimes by plane. They were on a trip away to “wean” the youngest from their mothers. Officers noted that the youngest ones had no diapers on and had been taught that the ground outside was their bathroom. One apparently went potty directly on the floor in the questioning room. When asked who the leader of the group is, the oldest child had replied “the Game Caller.” When offered food, one child consumed 8 bananas and an orange. They all seemed extremely hungry. Here is an excerpt from a news paper article documented by the FBI:

In the van, a few photos were found that lead investigators to believe child sexual exploitation was happening, and possibly even Satanic worship. Based on the children being from the D.C. area, the FBI was called to help Tallahassee police assist in the case. The FBI then began to work with Washington DC Metropolitan Police Department (MPD). A judge signed a search warrant for the two D.C. property locations known to belong to The Finders (a local warehouse and duplex apartment). Police found brochures, photos, books on mind control, indices, and computers. The ‘mothers’ were found and contacted. Five women claimed to be biological mothers to all six children. They claimed they knew the men well and trusted them, and that the children had not been kidnapped. They also spoke to press and insisted they were in no means part of a Satanic group, but rather a communal sort of group of intellectuals.

A doctor examined the children and determined two of the six to have physical indicators of sexual abuse. The doctor also found bite marks, although could not determine if the bite was from a child or adult. A behavioral scientist indicated that the children behaved similarly to those who had been ‘institutionalized for a prolonged period.’ When the children were placed into protective custody, a series of disturbing, violent phone calls were made to the child protective agency threatening bombing and other violence.

Among the evidence from the raids of the two D.C. properties, it is purported that photographs were found of men dressed in white robes holding a goat head, children engaging in blood letting of the goat and one even holding a goat fetus. Some speculate on the Satanic significance, as Baphomet depicts the devil as a goat in many artifacts and literature of Luciferian occult symbology. All these photos were in a file named “The Execution of Henrietta and Igor”. The ‘mothers’ claimed this was done for “hands-on” educational purposes and the meat of the goat was eaten. Also a vast amount of informational documents were found during the raid, such as techniques into mind control and child trafficking. Due to this evidence being found, a farm also belonging to The Finders in Nethers, Virginia was raided.

About two weeks after the initial investigation began, it was suddenly announced that the MPD and Tallahassee police were dropping all charges due to “insignificant evidence”. The doctor went back on her word and stated publicly there was not “conclusive” evidence of child sexual abuse. Local police officers claimed after examining the situation more that it all was just a misunderstanding and there did not seem to be cause to worry about child trafficking or devil worship. It was all just part of the “Satanic Panic” that seemed to be going around and although the group did not adhere to traditional societal male and female roles in raising children, nothing illegal was happening to warrant charges.

So what really happened? I will try my best to simply state facts and not conjecture too much.

The FBI eventually learned The Finders group had traveled to places like North Korea, Russia, and Vietnam (which were at the time considered ‘no travel’ zones) by searching passport travel records. The FBI requested information from the State Department regarding their passports and who approved the travel. The State Department eventually replied there did not seem to be any violation with any of the passports. The CIA was made aware of the FBI and local police department’s investigation into the group and claimed to be conducting their own investigation into the matter, but refused to cooperate by sharing any information with the FBI or local police. At one point, it is on record that a member of the FBI asked a member of the CIA if the investigation was “treading on anyone’s toes”, to which the CIA agent responded “Sort of…”

The leader of the group was identified as Marion Pettie. His wife Isabelle was confirmed to be a member of the CIA for 21 years. He was known as the “Game Caller” and claims to have been a student of life. He taught and learned ‘the game’. Just exactly what that game is is still a matter of debate.

Corporations and groups listed to somehow be connected to the cult are as follows:

Since the vault publishes FBI documents sometimes in mass, it does not always create a coherent story line. Page 49 of the documents suddenly and without explanation begins documentation of McMartin preschool in California.

The McMartin preschool is then documented to have many tunnels underneath it and the children were able to accurately describe entrances and exits. There were electrical switches in the school that did not work for that purpose, but rather sounded alarm alert systems. Classroom 3 contained no doorknob but solely a deadlock bolt. In the tunnels, pentagrams were found carved into the walls and on plates, along with 100 animal bones. The owner of this preschool was indicted; the trial lasted six years and then in 1993 all charges were dropped due to “lack of evidence”. In all these situations, it’s been said that no one ever ‘saw the child abuse against victims’ and therefore prosecution was ‘difficult’ to prove.

One final thought pertaining to the previous paragraph is that throughout the documents, many instances are recorded of The Finders using threats and extortion to silence dissent. Many people criticize accusers of Luciferian child sexual abuse saying if it were happening at an institutional scale, it would be well documented. I argue the exact opposite. These are powerful, intelligent, and sometimes professionally trained people in the art of dirty-handed techniques to obtain/maintain power, control and willingly engage in extortion, blackmail, and simply threatening violence against enemies and their loved ones.

Previous members are on record saying they feared retribution from the cult for leaving. Other instances of extortion exist as well, such as parents who tried to contact anyone in the group were sent letters describing sexual acts involving their family member that included drawings or pictures. I think it is interesting to mention here that Johny Gosch’s mother (the paperboy kidnapped in 1982 – the original milk carton missing child boy) is known for receiving pictures of her son after going public with accusations of a powerful and nationally connected child trafficking group as her son’s abductors. She was tipped off by a supporter that was somehow able to obtain an ‘underground’ brochure apparently passed around in pedophile circles, and found a picture she thought for sure to be her son. It was basically a catalog of boys for sale. She turned it into the FBI but apparently the lead went dry. Below are the pictures she received after going public with the message that this was bigger than a one-predator game. It may be that The Finders do not like to be found.

So what do you think? Are The Finders just an innocent “alternative-lifestyle, communal” type group as they claim or a devious proctor of children for pedophiles and the elite?