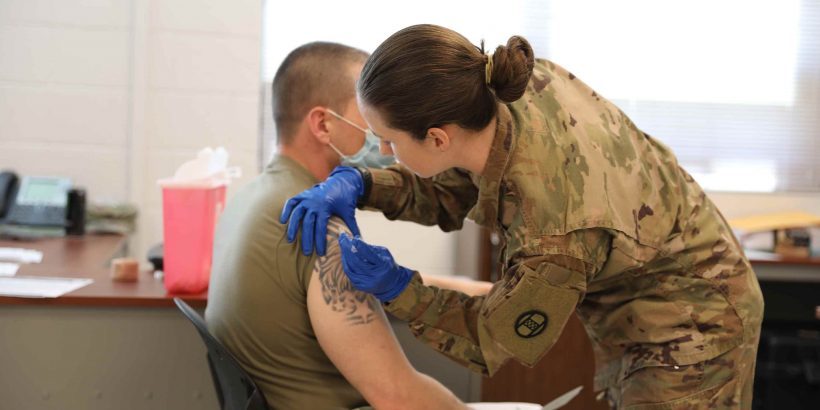 U.S. military department heads were ordered Tuesday to “immediately” start getting their troops vaccinated against the virus that causes COVID-19, two days after the first COVID-19 vaccine received federal approval.

Defense Secretary Lloyd Austin said in a memorandum made public Aug. 25 that the secretaries of all military departments must “immediately begin full vaccination” of all service members who aren’t already vaccinated.

A timeline was not laid out in the memo, but Austin directed a rapid pace, telling the secretaries to “impose ambitious timelines for implementation.”

Austin announced on Aug. 9 that all active-duty military members would have to get a COVID-19 vaccine. He said he would either wait until a vaccine was approved by drug regulators or, if that did not happen by mid-September, he would ask President Joe Biden for a waiver.

The Food and Drug Administration (FDA) approved the Pfizer-BioNTech shot on Monday.

Austin emphasized in the new memo that the mandatory vaccination will only use vaccines that receive full licensure from the FDA. That means troops will be required to get the Pfizer jab, a Pentagon spokesman said this week.

Approximately 68 percent of the active force, including the National Guard and reserve members, have been fully vaccinated, Pentagon spokesman John Kirby told reporters Wednesday. Another 8 percent have had one dose.

Fully vaccinated means a person received the full vaccination regimen and more than two weeks has elapsed since the last dose. Pfizer’s regimen is two doses.

The Pentagon has previously said members can apply for religious or medical exemptions.

The military “can’t have a large percentage of forces unable to deploy because they’re sick,” he said on C-SPAN.

“This is the right thing to do—for our public health and national security,” Rep. Seth Moulton (D-Mass.) said on Twitter this week.

Others have spoken out about a military vaccine mandate, with 31 House members introducing a bill in June that would bar the secretary of defense from mandating COVID-19 vaccines.

“Why force the vaccine on young members of the military who have natural immunity due to a prior infection?” Rep. Thomas Massie (R-Ky.), one of the sponsors, wrote in a recent social media statement.