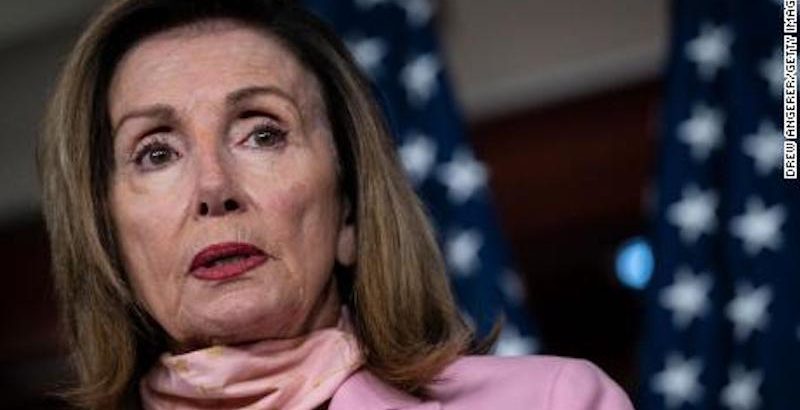 Speaker of the House Nancy Pelosi (D-Calif.) advanced President Joe Biden’s unprecedented $3.5 trillion spending blueprint on Aug. 24, but only after resorting to a parliamentary maneuver of doubtful constitutionality.

Known alternatively as the “self-executing rule” and “deem and pass,” the maneuver has been used only occasionally by majorities of both parties since 1933.

But debate still rages among legal scholars over its constitutionality.

Under the maneuver, a representative’s vote for one measure by the House is “deemed” to also apply in a specified manner to an entirely separate measure.

The resolution specifies that the House will vote on the infrastructure bill on or before Sept. 27, as requested by the moderates. The resolution also deemed the $3.5 trillion budget approved and instructed House committees to go into the reconciliation process that produces a final version requiring only a simple majority vote in the Senate, rather than the normal 60-vote majority.

With the Senate evenly split 50–50 between the parties, Republicans could have killed the budget under the 60-vote requirement. With Pelosi’s deeming procedure, Vice-President Kamala Harris (D-Calif.) will break a tie in the event of a party-line vote.

For veteran Republican congressional strategist Brian Darling, the whole process is a sham meant to provide political cover for moderate Democrats in the House.

“Deeming resolutions are a procedural way to provide an opportunity for multiple bills to be considered together where dissenting members can make believe they didn’t vote to support one or the other measure,” Darling told The Epoch Times.

“It is a terrible way to legislate, and the American people will not buy the argument of so-called moderate Democrats, who will claim they never voted for the $3.5 trillion budget measure,” he said.

Darling was referring to 10 moderate House Democrats who pressed Pelosi to ensure a vote on the infrastructure measure, which they assume is popular with voters, before the final vote on the $3.5 trillion budget that many voters fear will fuel damaging inflation and require higher taxes.

Because the measure is going to the Senate under reconciliation, Senate Majority Leader Chuck Schumer (D-N.Y.) has greater bargaining power in pressuring Sens. Joe Manchin (D-W.Va.) and Kyrsten Sinema (D-Ariz.), who share the House moderates’ worries about inflation and taxes. These two senators will know that they alone stand in the way of a Democratic victory.

The Speaker had little choice but to appease the moderates, because with a House Democratic majority of only seven votes (220–213), she couldn’t lose more than three votes and be confident of winning. Pelosi’s resolution passed without a single GOP vote.

A spokesman for Pelosi didn’t respond to an Epoch Times’ request for comment by press time.

New survey data suggest moderate Democrats on both sides of Capitol Hill are justified in worrying about voter reaction to the Biden spending plan, which was crafted by Senate Budget Committee Chairman Bernie Sanders (I-Vt.) and dwarfs any previous annual federal budget plan. Sanders is a self-proclaimed socialist.

In addition, the survey found that 64 percent of voters support “ending continuous deficit spending, and requiring that the federal budget be balanced,” while 13 percent oppose. Among Democrats, the anti-deficit position is backed by 49 percent of Democrats and opposed by 24 percent.

David McIntosh, the PAC’s president, said in a statement shortly after the House votes on Aug. 24: “Outside of San Francisco and Manhattan, support for this bill will generate significant voter backlash, and Club for Growth Action will begin looking into these and other districts for alternatives who better represent the values of their voters as opposed to cheerleaders for the Democratic Party’s radical tax and debt policies.

“Our polling shows Democratic voters are far more fiscally conservative than liberals in Washington assume, and we believe that’s a lesson they’re going to learn in the mid-term election.”

The House vote on H.R. 4 that was included in the Pelosi maneuver was also a straight party-line vote and was blasted by Jessica Anderson, executive director of Heritage Action, the political advocacy arm of the Heritage Foundation, a conservative nonprofit think tank.

“This bill hands a massive amount of power to unelected bureaucrats in the federal government, who will make voter fraud easier, make fraud detection harder, and advance a Left-wing agenda over the will of the people in all 50 states,” Anderson said in a statement.

“Under HR 4, Leftist activists will use the courts and DOJ to block any state or local jurisdiction from implementing their own bills to ensure election integrity … like voter ID, even though poll after poll shows a wide majority of Americans support requiring an ID to vote.”

Ken Cuccinelli, the former Virginia attorney general who is now national chairman of the Arlington-based Election Transparency Initiative, told The Epoch Times on Aug. 25 that the House voting on Aug. 24 still has a downside for Pelosi and the moderate Democrats.

“The more Pelosi piles into reconciliation, the more subject to the Senate Parliamentarian and Joe Manchin she becomes,” Cuccinelli said.

He was referring to the fact that many of the $3.5 trillion budget plan’s provisions are policy directives, not spending directives, and can be ruled out of order by the Parliamentarian and thus subject to the 60-vote requirement.