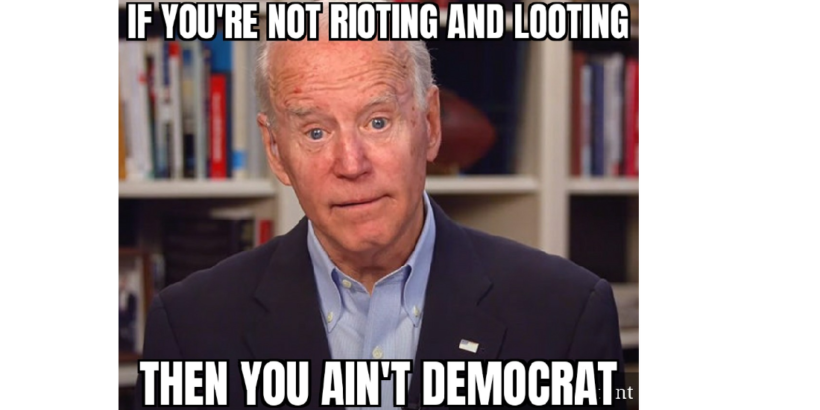 If this isn’t Inciting a National War – a Coup against President Trump –  what on earth is it?

And who’s behind it – and why?

The Federalist
By Joy Pullmann

Riot and protest instigators plan to “make sure Trump leaves the White House” by any means necessary after the Nov. 3 election, according to website posts from the group Shut Down DC and their allies. “[W]e’re making plans to be in the streets before the polls even close, ready to adapt and respond to whatever comes our way,” the group says on its website currently.

“Trump has shown that he will stop at nothing to maintain his grip on power. Trump will not leave office without mass mobilization and direct action,” an Oct. 13 version of the same web page reads, according to Internet Archive records.

The group linked to protests at the homes of Trump administration officials tells its DC-area supporters to “Come to Black Lives Matter Plaza” on election night “to create serious disruption if Trump really tries to steal the election!” Black Lives Matter Plaza is the site of repeated anti-Trump summer rioting and defacement of the historic Saint John’s Church one block away from the White House.

On the page, Shut Down DC sketches out its plans for election night and immediately following. On Nov. 4-7, the group says it plans to “do whatever it takes”:

In the days following the election we’ll continue to come out into the streets every day to respond to rapidly changing events. We may be waiting for votes to be counted or we may be responding to major attacks on democracy. Over the next few weeks we’ll use our Spokes Council process to plan actions that are flexible and can scale to respond to a lot of different scenarios.

Then, on Nov. 8-11, the group’s plan is to meet members of Congress returning to Washington DC for the lame-duck session. “If Trump is trying to launch a coup, that’s no time for business as usual. We’ll meet them at the train station or the airports or if they drive into town we can meet them at their homes,” the website says.

A slide deck posted on the group’s website from an “organizing call” claims this group is working in concert with leftist groups around the nation to prepare for President Trump to “steal the election” and attempt a “coup.” The slides pinpoint now as the time these groups are “gathering gear” to respond.

The post-election plan of action links to the group’s advice about taking “appropriate precautions” for security. This includes forming “affinity groups” “that will go into more detail and possibly engage in higher risk actions.”

“Keep in mind that not everyone needs to know every detail of your plans,” says the post-election plan about “taking appropriate precautions.” “We don’t! Feel free to only share what people outside your [affinity group] need to know, and keep the specific action details close to the vest.”

What kinds of actions these might be are stated in a “Strategic framework for action following the 2020 election” that sketches out their plans for rioting and attacking American institutions and life until Biden is installed as president. It claims if Trump declares victory that will mark “the start of the coup.”

“At some point in the days following the election Trump will almost certainly either attempt to declare outright victory or attempt to invalidate the results of the election. That is the start of the coup,” it claims. “…Trump can only seize power if the world believes that he has the power. That’s why we’re starting this phase of the election in the streets… We need to show that we’re ungovernable under a continued Trump administration…That can mean blocking traffic at major intersections and bridges, shutting down government office buildings (why should ICE or the FBI be able to keep doing Trump’s bidding when he’s leading with a coup?!?), or blockading the White House.”

The document bases its action plan upon the scenarios projected by the establishment leftist “Transition Integrity Project” for election night and sketches these activists’ response to each, explicitly rejecting the possibility that Trump could legitimately win. It continues:

We’ll keep it going until Trump concedes. We could be in the streets throughout the fall and into the winter– maybe as lots of rolling waves of action or possibly as a few major tsunamis! In other parts of the country, as vote counts conclude, our focus will turn from protecting the vote counts to themselves being ungovernable.

As it becomes clear that Trump’s coup is failing, institutions and the elites will start to abandon him – or we will approach them as part of the problem. Either Amazon will shut down AWS for the Trump loyalists in the government or we’ll shut down their fulfillment centers. Either governors will tell their national guards to stand down or we’ll shut down their state capitals as well. Over time, Trump will grow increasingly isolated and his empire will crumble down around him.

Then — and this is the important part — Biden will move into the White House and be sworn in as the 46th President of the United States.

On its Facebook page, the group recently posted a picture of a mob arriving at Sen. Lindsey Graham’s house at 6 a.m. to harass him for following the Constitution. In the picture, one protest sign reads, “We can’t sleep so neither should Lindsey.” “Preventing Donald Trump from stealing the election and remaining in office is likely to take mass, sustained disruptive movements all over the country,” the group’s website posted on Oct. 7.

“Puting [sic] pressure on the media and social media agencies to refuse to declare a victor, resisting demands to call the vote in forvor [sic] of Trump, physically protecting the vote count from counter-protestors, federal agents, or white supremacist militias are all potential actions in this moment,” says the group’s “Disruption Guide for 2020.” The guide, a Google document, had 61 viewers at the moment it was reviewed for The Federalist.