As we know, President Trump was diagnosed with COVID. He was admitted to the hospital and after a few days was released.

Ric Grenell tweeted this, “What you never hear from CNN and the DC media crowd is that 17 US intelligence agencies issued a rare public statement making clear that COVID 19 started in China. And the secret Chinese Communist ways made the virus spread worse. This is from US intelligence agencies.”  Why isn’t the media mentioning this?

First, they went berserk when Trump was admitted to the hospital, saying he was much more sick than he really was, that he was on his death-bed and he wouldn’t make it out of the hospital alive. Then when he drove around in his SUV, they freaked out saying he would give COVID to his secret service team.

Then when he arrived at the White House and took off his mask, they freaked out saying he was being irresponsible. When he said he felt he was cured using Regeneron, what did the media do with this front page information? Crickets. Nothing. They have their instructions from the DS.

But we who are awake, understand.  The President had COVID. He was cured, and now he’s going to help everyone else. There’s no reason to be afraid, or to wear a mask, or to do mail-in voting, or to be in lockdown. You shall know the truth and the truth shall set you free!

During this time, America is seeing a lot of declassification.  The DS does not know what to do. Their method is to push propaganda, but Trump’s method is supported by factual documentation and science.

The DS and media have been using propaganda but Trump has used his authority to counter their propaganda by way of declass, proving the DS’s spins and lies. What does it feel like to go up against truth and facts? Panic!

Before, no one challenged the DS’s propaganda, until Trump. This is why they want him gone so badly. Those who want him gone are following the DS’s narrative. Will those people ever wake up?  Many are asking questions. This is called, ‘The Great Awakening.’

Wednesday evening, the debate between Vice-President Mike Pence, and VP candidate Kamala Harris, took place. While the Patriots were dissecting the talking points, it seems the only talking point the Dems had was the fly which landed on VP Pence’s hair.  Was this an intentional distraction from the lack of control Kamala Harris possessed during the entire debate?

They think of us as flies, and there was a fly on Pence’s head. Coincidence?

The D’s are panicking, realizing they cannot continue with the debates. When the Patriots use facts against their lies, they are made to look foolish. They decided to change the rules blaming it on the fact Trump had COVID. They want a virtual debate.

In the first debate, Wallace was Biden’s block. With the second debate, could teleprompters be the reason behind this? Trump doesn’t want a virtual debate. He wants to debate Biden face to face.

We then learn, ABC News is planning to host a ‘town hall,’ with Joe Biden. The moderator will be George Stephanopoulos. The date they have planned… October 15th… the same night as the second debate. When did they begin the planning of this?

We know this is panic mode. They have tried everything else to get rid of Trump and everything else has not worked: President Obama shadowing Trump with the Shadow Government, the Russian Collusion, the Impeachment Hoax, Cohen, the Pandemic, the riots, etc.. Nothing is working!  What will they try, next?

Nancy Pelosi wants to invoke the 25th Amendment which means removing Trump from office for health reasons. Trump got the virus, spent 3 or 4 days in the hospital, came out of the hospital, cured, and now is back in the White House. He says he feels better than ever!  Doctors are monitoring him saying he is in perfect  health… and Nancy is so concerned about his health that she wants him removed.

But Trump, ordered the FBI and CIA to declassify information without redactions… let the American people see everything! What did they do? The FBI sent out the document still with redactions in place. We couldn’t see anything! 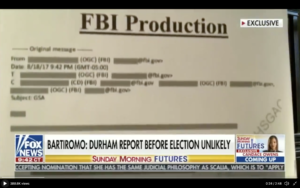 Interestingly enough, the USGSA put out the exact document, only they unredacted everything except for a phone number. Who is this GSA that they could work their ‘magic’ enough to present documents without redactions the FBI could not present? 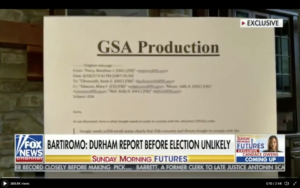 The DOJ produced new evidence in support of General Flynn’s innocence. Ratcliffe has submitted to the DOJ nearly 1000 pages of documents per Mr. Durham’s request. President Trump has stated he wants to remain transparent with the American people. Judge Sullivan knows about it and this case needs to be dismissed! Will Judge Sullivan follow the law and dismiss this case?

John Durham has reportedly opened a new front in his investigation into the origins of the Trump/Russia probe. Durham is seeking Grand Jury testimony behind the allegation that Trump’s real estate company had a secret communication channel with the Alpha Bank. All of this was debunked but Durham wants to know where this fabrication originated from. Who set it up and how did it come about?

This is about looking into everything the DS has done. Did Durham have any idea how many rabbit holes he’d have to go down? The documents and money transfers, etc. was leading to the huge plan the DS created. When the indictments are made public, it will be ‘Game Over!’

Donald Trump tweeted out, “Obama, Biden, Crooked Hillary and many others got caught in a Treasonous Act of Spying and Government Overthrow, a Criminal Act. How is Biden now allowed to run for President?

We know there are certain departments looking in to Hunter Biden, Joe Biden, the transfer of 3.5 million dollars from Russia to Hunter.  The Senate just finished an investigation in to Joe and Hunter admitting there are problems. Now the DOJ will take on the investigations, possibly opening up criminal investigations on it all. So, why IS Biden allowed to run for President?

Will the DS switch him out, soon?

In spite of what the Media wants Americans to believe, there is definitely fraud with mail-in voting. In North Texas, a mayoral candidate has been accused of mail ballot application fraud

in the upcoming election. Zul Mirza Mohamed was arrested and is facing 84 counts of ballot application fraud and 25 counts of unlawful possession. New Jersey found ballots in a dumpster. How can the media report there is no ballot fraud?

In Post 4829, there is a 2018 photo of a missile being launched from Whidbey Island, Washington.  The question was asked: ‘Do you remember when they told you this was a helicopter?’ From the media, the cover story was reported that it was a ghost image, the fire from the missile was actually the lights from a helicopter. It was a terrible cover up! The close up looks like it was a missile and looks like it was fired from the ground. Who launched it?

Do you remember when North Korea was a Nuclear threat? Under the Chinese government, they were firing missiles at the instruction of the DS. In 2018, Hawaii sounded the alarm to scare people into thinking there was an active nuclear attack being activated. What happened? Then in North Korea, there was an explosion underneath a mountain where they were creating the missiles. After that, they weren’t firing missiles anymore. NK was being used by the DS as a constant nuclear threat.

The missile attack was supposed to start a war and be blamed on NK, but Kim Jong Un’s strings were cut and NK is no longer a threat. China is pressuring NK to launch missiles before our upcoming election. But it won’t work because Trump has a special relationship with Kim Jong Un.

Post 4831:
Why did Paul Ryan refuse all subpoena requests by R Committee chairs? Was he behind the dossier shenanigans? What is the going rate for THE SPEAKER OF THE HOUSE to obstruct Congressional investigations for the purposes of delaying and/or eliminating its findings? Why did Paul Ryan initially refuse to be Speaker? What was coming? Why did Paul Ryan retire at such a young age? Was he given two choices… to leave and live, or to stay and go down with the ship?

Trump outed the Shadow President. He exposed the Swamp. He declared ANTIFA and the KKK domestic terrorists. The Patriots know their plan and have counter measures in place. They have been preparing for this very moment.  The Patriots are in total control!