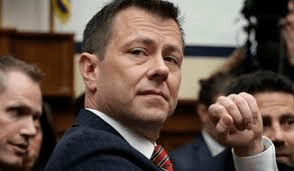 Days earlier, Rucker had discovered an anomaly in all but four of the 30,490 emails Clinton’s lawyers provided to Congress. Each message contained “carterheavyindustries@gmail.com” in the metadata, suggesting that a copy of each message that passed through Hillary Clinton’s private, unauthorized server during her tenure as secretary of state was forwarded to the Gmail address in real time. Rucker’s concern was amplified when he searched for “Carter Heavy Industries” on Google and came up with information for a Chinese company with a similar name.

On the same day, more than 1,600 miles away in Denver, Colorado, FBI agents interviewed Paul Combetta, the information technology aide who allegedly created the mystery Gmail account. Combetta told the agents that he used the account in February 2014 to transfer an archive of Clinton’s emails from her tenure as the secretary of state to the Clinton email server he was administering for Platte River Networks in Secaucus, New Jersey. As a result, “carterheavyindustries@ gmail.com”ended up in the metadata of each message.

While the existence of Combetta’s Gmail was revealed long ago, the curious name he picked for the account and the fact that it was embedded in the metadata of all but four of the emails provided to Congress became public on Aug. 14 this year, when Sen. Chuck Grassley (R-Iowa) released a set of letters and documents resulting from the Senate Finance Committee’s investigation related to “carterheavyindustries@gmail.com.” In the last few pages of the document, a letter from the inspectors general of the Intelligence Community and the Justice Department concludes that they are not aware of any evidence linking Combetta to the Chinese company with a name similar to the Gmail he allegedly created.

“I’m still curious—how did he come up with the name for the email and what has the FBI done to see if there are any connections between China and Combetta?” Rep. Louie Gohmert (R-Texas) told The Epoch Times.

“It may tell us, as we suspected, that they probably already knew about it and when they found out the Intel IG knew about it, then they had to at least ask a question about it to try to cover their rears.”

While Grassley’s documents settled some of the mystery surrounding the Gmail account, the details within raise more questions than they answer. The revelation also exposes another blatant breach of security protocols in the handling of highly classified information by Clinton, her staff, and her lawyers.

At least eight of the email chains contained in the batch Combetta siphoned through the Gmail account were classified as top secret, the highest level of classification for government documents in the United States, at the time they were sent. In the hands of an adversary, top-secret information could cause “exceptionally grave damage” to the national security of the United States. At least 36 email chains contained secret information, of which disclosure to an unauthorized actor could cause “serious damage” to national security.

Intelligence Community Inspector General Charles McCullough told Congress that some of the Clinton emails were classified at a level beyond top secret, meaning it was information so closely held that even members of Congress could not view it in a secure, compartmentalized facility.

According to the Grassley documents, Combetta created the Gmail account in 2012. The IT aide told FBI investigators in his Feb. 28, 2016, interview that he used the same Gmail account to test email issues for his other clients, meaning that other email servers had been connected to “carterheavyindustries@gmail. com.” Neither the FBI nor the inspectors general have disclosed whether anyone other than Combetta had access to the Gmail account prior to 2015. The government has also not provided any evidence to show whether some of Combetta’s clients’ servers were still connected to the Gmail account at the time he used it to transfer Clinton’s email archive.

Despite learning that Combetta transferred Clinton’s entire email archive through “carterheavyindustries@ gmail.com,” the FBI waited for a month to apply for a search warrant for Combetta’s account. A magistrate judge in Virginia granted the warrant on June 20, 2016, roughly two weeks before then-FBI Director James Comey usurped the authority of the attorney general and exonerated Clinton in an unprecedented public statement. After the FBI executed the warrant, analysts discovered 820 of Clinton’s emails—some of which were classified—still sitting in the Gmail account more than four months after the Intelligence Community inspector general investigators handed the lead over to the bureau.

No public information is available to explain why the FBI delayed applying for a search warrant, but it is known that Strzok, who led the investigation until it concluded in July 2016, had an explicit bias in favor of Clinton and against then-candidateDonald Trump. In a review of the Clinton email investigation, Department of Justice Inspector General Michael Horowitz concluded the biases expressed by Strzok and others at the bureau “cast a cloud over the entire investigation.”

Meanwhile, public FBI documents and the review by the Department of Justice inspector general fail to explain how Clinton’s attorneys Heather Samuelson and Cheryl Mills ended up with the emails from the archive created using the Gmail account. In his third interview with the FBI on May 3, 2016—under an immunity agreement—Combetta told the FBI that he did not use the archive mailbox he created using “carterheavyindustries@gmail.com” to provide email exports to Samuelson and Mills, the Clinton attorneys tasked with culling Clinton’s personal emails. Combetta speculated that a user may have imported the archive mailbox in the live mailbox or that someone may have accessed the archive to pull the emails produced to the State Department, which subsequently went to the FBI. Mills and Samuelson told the FBI they never had access to the archive mailbox on the server.

The discrepancy between the different accounts is significant because both Mills and Samuelson had access to emails from the live mailboxes on their devices and from the exports Combetta created, yet ended up providing Congress the emails from the “carterheavyindustries@gmail.com” archive.

Whether Samuelson and Mills chose this set of archived emails intentionally or accidentally remains unknown. What is known is that Combetta repeatedly changed his story about when he created the email exports for Samuelson and Mills and whether he used the Carter Heavy Industries archive mailbox to create the exports.

When FBI agents interviewed Combetta for the first time on Sept. 15, 2015, he said that Mills called him in September 2014 and asked him to create an export of all Clinton emails sent to and received from government email addresses. During the second FBI interview on Feb. 28, 2016, when he was confronted with a Platte River Networks work tickets dated July 2014, Combetta admitted that he was contacted by Mills and created an export for her on July 23, not September, that year.

Combetta’s fuzziness about the dates is notable considering that the congressional Benghazi committee had reached a deal with the State Department on an email production on July 22, the day before Mills called Combetta. Meanwhile, July 23, 2014, is the day on which Combetta madea post on Reddit seeking advice for altering the contents of “VERY VIP” emails.

“I may be facing a very interesting situation where I need to strip out a VIP’s (VERY VIP) email address from a bunch of archived email… Basically, they don’t want the VIP’s email address exposed to anyone, and want to be able to either strip out or replace the email address in the to/from fields in all of the emails we want to send out,” A Reddit user named “stonetear” wrote.

Reddit users tracked “stonetear” to an online marketplace account on Etsy registered to Paul Combetta. Combetta also appears to have used stonetear@gmail.com as his email address to register the domain Combetta. com.

Gohmert told The Epoch Times that contradictions in the accounts of Mills, Combetta, and Samuelson mean that at least one of them risks having their immunity deal voided if it is found they have lied to investigators.

The conflicting accounts and changing stories raise further questions about Combetta’s use of Bleach-Bit, a specialty software, to wipe exports of Clinton’s emails from the email server and from the laptops used by Samuelson and Mills.

Combetta admitted to the FBI, once he was granted immunity, that he had an “oh [expletive]” moment in March 2015 when he realized that he had not deleted the archive mailbox containing the emails he imported using the “carterheavyindustries@gmail.com” account. At that point in time, he was aware that Congress had ordered for Clinton’s emails to be retained. Combetta deleted the mailbox anyway.

With so many questions swirling around the Clinton email investigation even after a seemingly exhaustive examination of the matter has been conducted, the FBI could clear away a lot of confusion by releasing more documents. But, according to Gohmert, FBI Director Christopher Wray’s approach seems to be to release as little as possible in a bid to preserve the credibility of the bureau.

“Part of it is Christopher Wray who is dear friends with [former FBI Director] Mueller, dear friends with Comey,” Gohmert said. “It appears to me that he’s been more interested and keeping quiet as much as he possibly can, and then hoping the FBI gets their credibility back, instead of rooting out wrongdoers and coming completely open.”

Neither Mills nor Samuelson were aware that Combetta had created an archive mailbox on the Clinton email server run by Platte River Networks.

Combetta created the mailbox using “carterheavyindustries@gmail. com” upon a request from Monica Hanley, an aide to Clinton. Combetta said Hanley contacted him in February 2014 and asked him to transfer an archive of Clinton’s emails from 2009 to 2013 in her possession to the Platte River Networks server.

Then-Democratic presidential nominee Hillary Clinton gets in her car after leaving her daughter’s apartment building in New York on Sept. 11, 2016.

After attempting to perform the transfer remotely and failing due to a poor network connection, Combetta had Hanley ship him the Apple Mac laptop on which the emails resided. Combetta then used the Gmail account to transfer the emails to the email server. He told the FBI he used the Gmail address because he could not take emails from the Mac’s email application directly to the server.

It may tell us that they, as we suspected, that they probably already knew about it and when they found out the Intel IG knew about it, then they had to at least ask a question about it to try to cover their rears.