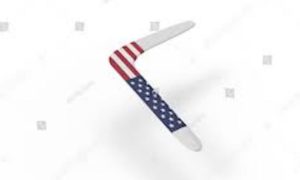 The corruption is not new, but the Boomerang effect will be. It is a game changer and our POTUS is a master.

The Deep State’s shocking agenda of mandated vaccines, removing the rights of We the People and needing proof of vaccines in order to work, are only a few of their nazi-like plans for We the People. Or in their eyes…. We the Sheep.

President Trump, once again, was steps ahead of their plan to take down America. He deliberately mentioned the game-changer, Hydroxychloroquine. There was also the FISA abuse and indictments. Are we finally going to see justice?

Yes! Do you really think POTUS will allow these attacks against us and our duly elected leader, to go silently into the good night? He has clearly said we must be certain that this will never happen to another sitting President again!

A shock-wave will be felt deep within America and around the globe, as truth is exposed for all to see. The world will be forced to awaken from their slumber.

The first indictment will create a shock-wave around the world. Unbelievable heart-ache within those who are still asleep, will be met with unbelief, anguish and anger as they awaken to the truth.

The Red Pill is at hand, for those who have kept their heads in the sand.

The Judiciary Committee has declassified explosive proof of FISA abuse the FBI was hiding. Resolute panic has paralyzed those who knew the truth, but did nothing to expose it. They never thought she would lose! Now they know what is coming… the pain is inevitable. Nothing can stop what is coming.

Three-and-a-half years of lies from the media, FBI, DOJ, etc., is being exposed. The previous cover story was put into place to give a false appearance that Russian spies were involved with Trump’s campaign, so conversations could ‘legally’ be recorded.

With declassification of the FISA footnotes, everything is being exposed. [Cue] has mentioned, ‘FISA equals start.’  Wait for the starting gun.

Their entire cover-up is on the brink of exposure. The DNC server wasn’t hacked by Russia. They all knew. The accused go all the way up to the top. They never thought she would lose.

Democrats plan to cheat in November in order to keep President Trump from winning again. The endless attempts of a full blown Coup continues. It won’t work because we have it all.

Watch the video as Dave from X22 Report lays out 4 areas of control they wanted from Trump. He knew if he took their bait, this would most likely cost him the election, but he created a boomerang effect instead.

The Year of the Boomerang is at hand, and America is being made great again.

X22 video is revealing and lays everything out for us! Well done Dave!