SPYGATE: THE EFFORT TO RIG AN ELECTION IN ORDER TO RETAIN POWER 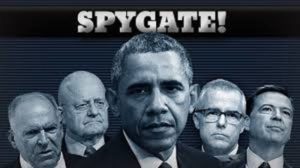 The FISA will kick off everything! Many FISA’s were obtained illegally.  A carefully calculated coup staged by our own FBI, CIA and others was in place to remove the President of the United States.

Spying on President Trump was not accidental. Others outside of Trump’s administration were also spied on. Even though the media vehemently denies allegations, documentation of spying is in the hands of the White Hats. U.S. Attorney, John Durham is after them and will expose everything.

Tara Reade’s case against Biden is building with many witnesses coming forward with the same story. An old tape of Larry King Live surfaced and described what happened. Where is the ‘Me-Too’ movement? Where is the media and why are they silent? Aren’t all women to be believed?

Trump believes it is fake news that Kim Jong-Un has died. Today, reports surfaced that his private train has been spotted. China went looking for Kim. Are the White Hats hiding Kim Jong-Un because he and Trump both cut ties with China? What would China have done to him had they found him?  It’s starting to look like the Patriots are protecting Kim-Jong-Un.

This ‘pandemic’ is not a pandemic. The numbers are less than the flu which are about 30,000 – 60,000 deaths. The Coronavirus matches this recovery rate. It’s becoming more clear, this is about winning an election.

The DS will do anything to steal America from the people. When Americans take their country back, Trump and his administration will build it again. The peoples’ freedoms will be returned. AG Bill Barr will check on each state and if the governors violate the constitution, he will call them out.

Gen. Flynn was framed by the government. The DS created the deception so Flynn would be trapped but this is the beginning of the end for these treasonous people. Flynn will be exonerated and the case will be dismissed.

Trump is going after anyone who [knowingly] has pushed fake news. People have awakened to the Mockingbird Media’s deception. Even Fox News is losing viewership. In the midst of a National Emergency, the MSM continues to show us they are the enemy of the people.

People want truth. When undeniable evidence surfaces of the evil crimes against humanity, and how the MSM was complicit, people will wake up. Citizen Journalists are waiting to launch. We are the News now!