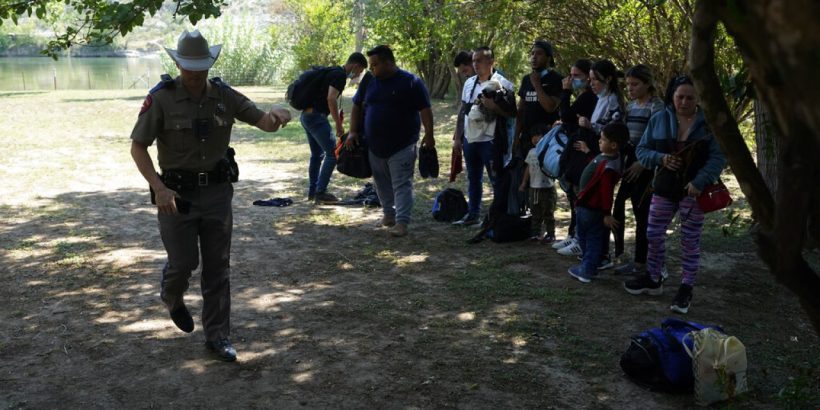 BRACKETTVILLE, Texas—Locals fed up with groups of illegal immigrants trespassing on their land and breaking into their homes and vehicles attended a town hall meeting to share their frustration with Texas Attorney General Ken Paxton and his staff on Oct. 11.

The first questions from the audience reflected the boiling point many have reached and the prevailing feeling that they’re being left to fend for themselves: “Can we shoot back if shot at from Mexico?” “When can a property owner use force?”

“If you’re in imminent danger, I think the answer is probably yes,” said Joshua Reno, Paxton’s deputy attorney general for criminal justice, in response to the first question.

“You still have the same rights to defend yourself. This is a really difficult question, though. … The consequences, I think, are something that’s going to be very dire—we’re talking about shooting across the border to another country.”

As for using force against intruders, Reno said there’s a myriad of scenarios, but when it comes down to it, “you can defend yourself with the equal amount of force that’s being used against you—that’s the easiest way to put it.”

Brent Webster, first assistant attorney general to Paxton, put it more succinctly: “If someone’s invading your home, you have a right to defend your home with deadly force. I want to be clear about that.”

The town hall occurred just weeks after nearly 15,000 mostly Haitian illegal immigrants entered the United States and camped out under an international bridge in Del Rio, 30 minutes down the road. More than 12,400 of the Haitians were subsequently released into the United States, according to Department of Homeland Security Secretary Alejandro Mayorkas.

During that time, Border Patrol highway checkpoints in the area were closed and Texas state troopers were pulled off the roads to beef up law enforcement numbers under the bridge.

Kinney County, in which Brackettville sits, shares 16 miles of international border with Mexico, and it’s a main thoroughfare for human smuggling—by foot, train, or by vehicle—from the border to San Antonio.

The Texas Department of Public Safety (DPS) has arrested more than 1,100 illegal aliens trespassing in Kinney County in the past several months, according to Kinney County Sheriff Brad Coe.

In early October, state troopers stopped a human smuggling attempt in Kinney County that involved four cars and included a Syrian driver who was carrying a Glock 19 and five magazines. The Syrian had a green card and was subsequently released by Border Patrol, but will likely face state charges brought by the DPS, Coe said.

A Cuban national with a green card who was residing in Houston was stopped and arrested on Oct. 13 while driving four illegal immigrants from Mexico, Coe said.

At the town hall, several audience members were clearly dissatisfied with hearing that they may have to wait until after the 2022 midterm elections for the possibility of tightened border security. Many had attended a town hall meeting in May that covered the same issues, and by all accounts, illegal immigration and cross-border crime has escalated over the past five months.

“We don’t have time for an election. We really don’t. We have time to act,” said Uvalde rancher Mike Miller. “We want to live in our homes with no fear. They’re coming with weapons and the Zeta cartel is running our border right now.”

Ray Salness, who has been in Kinney County looking at private security options for ranchers, said: “We’ve got three weeks before the [next] 60,000 hit the border. Which means if we don’t get something done in two weeks, there’s not going to be a Kinney County.”

Salness implored Paxton’s team to defend Coe if he uses militia members along the border, should the state deny him the use of Texas National Guard troops.

Coe said he spoke to the governor’s office on Oct. 13 and doesn’t expect any National Guard troops in Kinney County, but 1,500 personnel are being deployed to the border cities of Eagle Pass and Del Rio.

Meanwhile, Coe said he’s preparing to meet with Salness to sign an agreement to allow a “defensive security force” to come in and set up camp in the county and work the ranches for illegal activity. He’s hoping to get donations to help offset the cost through the county’s new border security website.

“We’ll try to get them deputized or something to get the ball rolling because the governor’s not going to help us,” Coe said, adding that some legal issues need to be ironed out first. He’s hoping for around 600 volunteers, but expects 100 to start.

“It’s going to be a combined effort—we’ll get intel from DPS, get intel from Border Patrol where the biggest groups are coming through, which cameras are seeing the most activity—and get them set up in those areas,” Coe said. “And then we’ll start processing them [illegal aliens], charging them, and see what happens.”