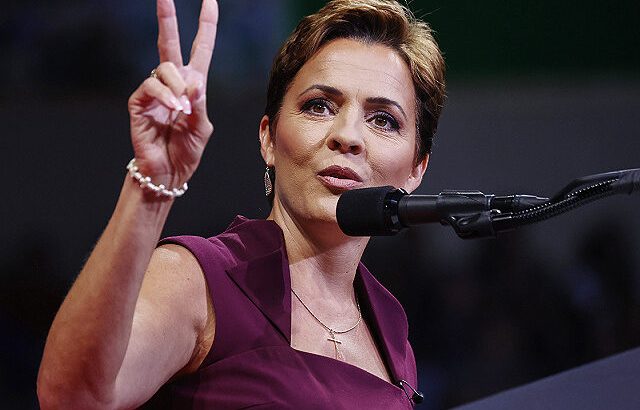 PHOENIX, AZ – Arizona’s Kari Lake, a former Fox 10 Phoenix anchor running for governor as a Republican, sat down with Breitbart News for an exclusive interview where she recounted why she exited the world of journalism and detailed what sets her skyrocketing grassroots campaign apart from other candidates.

Lake, who Democrat strategists see as a “major MAGA star” in the making, spoke with Breitbart News on Wednesday evening in Phoenix. After 22 years at Fox 10 and nearly three decades as an anchor, Lake said she decided to leave the world of journalism because leftist bias made its way to the forefront of news coverage.

“We’re so on to the legacy media, the mainstream media, it’s so obvious what they’re up to,” said Lake, who is endorsed by former President Donald Trump. “The way they cover things when they go, ‘Oh, you can’t ask that, you’re an election denier, you’re this,’ they call people names, and you just go ‘Wait a minute, journalists shouldn’t call names like that, they shouldn’t label people.’

“I think people are awake to the fake news and thank God for President Trump for opening our eyes,” she went on to say. “I just got fed up; I knew it was heading toward the left. I knew that the majority of people in the news were liberal, some of them hardcore leftists, and it was a smaller and smaller and smaller group of people who were conservative.”

“Listen, we’re gonna get all kinds of people in this world. Not everyone’s gonna be completely neutral in the middle; it’s really hard not to have any opinions, but you got to check your opinions at the door,” she added. “I was trained to do that. People come up to me and go, ‘I had no idea that you were conservative. I didn’t even know.’ And I go, ‘That’s because I was a good journalist.’ I didn’t show that on the air.”

Throughout her campaign, Lake has taken adversarial media in a head-on, off-the-cuff fashion that is reminiscent of Trump’s. In fact, moments before the interview, Lake held a nearly 30-minute long press conference outside of Arizona PBS in downtown Phoenix, where she went toe-to-toe with members of the media and slammed PBS for granting Hobbs an exclusive interview against the Clean Election Commission’s direction. The CEC had set up a one-on-one between Lake and the station because Hobbs refused to debate, and the entity opted not to accommodate the Democrat secretary of state by giving her an exclusive.

“I’m trying to – when I call people out at these press conferences – when I’m hard on the press – I’m trying to train them and show them, ‘Here’s how you do it, guys. Start covering the news fairly because the people are onto you,’” Lake explained. “The headlines that already came out about this debate thing before I got [to the press conference] were already so biased. I was like, ‘Oh my gosh, I haven’t even spoken yet. And they’ve already gotten the story wrong.’ They set the narrative, which was not right. So hopefully, I straightened them out on it, and they spin it around a little bit and get it straight.”

Lake noted earlier in the interview that she is “a little hopeful” about the future of news as she’s “seeing some new media kind of sprouting up.”

“Amazingly, Breitbart and some of the conservative media that’s considered conservative now is really actually fairer like it used to be,” the former news anchor later said. “Now it’s gone so far to the left; I’m like… ‘How does anybody believe this stuff?’ You can hear it when they ask the questions, oftentimes the leading questions that there’s an agenda… You’re like, ‘Was there a question in there? It’s crazy.’”

As Lake has garnered tremendous support from an extremely enthusiastic base – perhaps in better fashion than any other candidate in the country this year on either side of the aisle – Breitbart News asked what sets Lake, the candidate, and her campaign apart from others.

“I think one of the things is I am truly a citizen stepping up to run for office,” Lake began. “Most other people running have connections in the world of politics. I am truly doing this because the people of Arizona asked me to do it. And I got fed up with my career; I got fed up with propaganda. I walked away from that. And I think that God pushed me to make that decision and opened me up for this moment.”

“The people asked me to run; I have a unique ability and skill in that I understand this state more than the average person because I covered it for nearly three decades,” she continued. “I’ve been in people’s homes whether they’re… Democrat, Independent, or Republican, so the people know me and they like me. Before I got into politics, they tuned in; we were number one for 22 years, pretty much that whole time. That’s unheard of in local news to be a powerhouse like that. And when I walked away, it stunned a lot of people.”

“I talk to people now on the campaign trail –  they say, ‘I can’t believe when you walked away. I said to my husband she needs to run for office. I never emailed you that, but I said that and then you ran for office; I was so excited. I’ve never been more excited about politics in my life,’” Lake told Breitbart News. “Not everybody texted me and wrote me to run for office, but …probably hundreds did. They said, ‘We love you, thank you for being such a fair journalist, would you please run for office?’”

She called her formula “a perfect combination of friendship, knowledge of Arizona, and an understanding of what the issues are here.”

“I don’t need to have a bunch of political people telling me what to talk about because I get this state,” Lake added. “And the grassroots are behind me because they recognize, ‘She’s in this for the right reason. She’s not controlled by this group or that group. She’s in this because she really loves Arizona.’ And that’s… what people want from their elected officials, someone who’s in it for the right reason.”

Her approach has connected with voters and is striking fear in the hearts of Democrats who are watching her turn into a national America First superstar before their very eyes. Two of the latest Arizona governor’s race polls show Lake has taken the lead in the race after a close September. An Insider Advantage poll sponsored by Fox 10 Phoenix shows Lake with a nearly four-point lead after being neck and neck with Hobbs in September, while an OH Predictive Insights poll found Lake to have a three-point lead over the Democrat who refuses to debate.

While Lake has taken momentum in the polls, which coincided with the weeks-long disastrous debate narrative that Hobbs turned into a spectacle, Democrat strategists are keeping close tabs on the Republican. David Plouffe, who was former President Barack Obama’s campaign manager in 2008, recently told Axios that Lake is a “plausible presidential candidate.” While Democrats see national potential in Lake, the Republican seems squarely focused on the race in front of her.