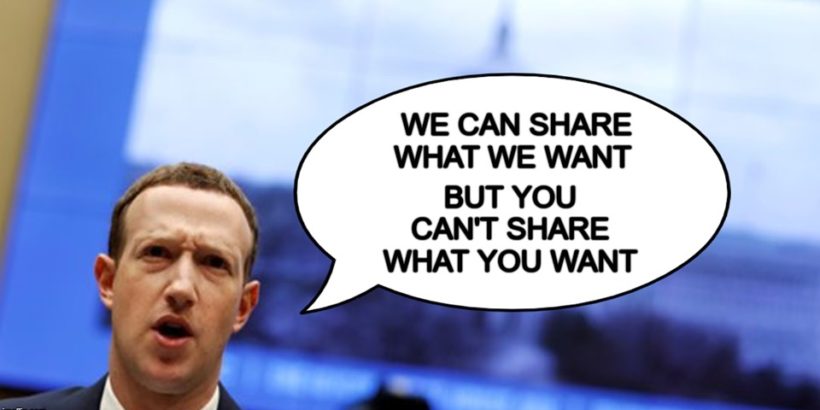 Photos of gatherings outside various state capitols, show protesters are not always maintaining a perfect 6′ distance between one another.

That seems to foment Liberals so much that Zuckerberg takes it on himself to remove pages of those organizing the protests.

Doesn’t this seem like gross overstepping to you? Are we really not free any more?  Zuckerberg doesn’t seem to understand we are not his sheeple any more.  We say, “knock off the stupid games, Zuck.”

“Social Distancing Guidelines” What are Guidelines?  If Guidelines are just that – Guidelines – doesn’t that suggest we have our own prerogative to follow or not, according to our own discretion?  And if it’s not the law, no law has been broken.

So what is that to you, Mr. Zuckerberg?

BY ZACHARY STIEBER
Facebook is removing some pages used to organize protests of quarantine measures implemented by governors across the nation.

Thousands of people have joined protests in recent days against executive orders mandating people largely stay at home, many of which have been in place since last month.

A Facebook spokesperson told The Epoch Times on Monday that the company will let organizers use Facebook to organize events if they follow social distancing guidelines but will remove pages that don’t.

“Unless government prohibits the event during this time, we allow it to be organized on Facebook. For this same reason, events that defy government’s guidance on social distancing aren’t allowed on Facebook,” the spokesperson said in an email.

In cases where authorities make clear they’re allowing protests as long as social distancing guidelines are adhered to, Facebook is allowing the pages to remain online. But content that advocates for in-person gatherings defying guidance from the government will be taken down.

“How do you deal with the fact that Facebook is now being used to organize a lot of these protests to defy social distancing guidelines in states,” George Stephanopoulos, the former Bill Clinton aide and current ABC anchor, asked Zuckerberg on “Good Morning America.” “If somebody trying to organize something like that, does that qualify as harmful misinformation?”

“We do classify that as harmful misinformation and we take that down,” Zuckerberg responded.

“At the same time, it’s important that people can debate policies so there’s a line on this, you know, more than normal political discourse. I think a lot of the stuff that people are saying that is false around a health emergency like this can be classified as harmful misinformation.”

Pages promoting protests against lockdown orders in California, New Jersey, and Nebraska were removed after Facebook officials consulted with state government officials, a Facebook spokesman told CNN. The company is working with state officials in New York, Wisconsin, Ohio, and Pennsylvania to see if pages for protests planned for those states should be removed.

Social distancing mandates contributed to millions of Americans losing their jobs and many protesters cited unemployment or economic fears as the main impetus for protesting, along with concerns of rights violations.

Most governors have not yet outlined firm reopening plans; some instead extended the measures into May.

Texas, Ohio, and South Carolina are among the few states confirming dates for phased reopenings.

Facebook has been widely targeting articles, posts, and events during the pandemic, trying to position itself as a neutral arbiter of “misinformation.” In March, Facebook displayed warnings to users on 40 million posts, removing hundreds of thousands it deemed harmful.

The company said last week it would start notifying people who interacted with harmful claims about the new illness from China, utilizing the World Health Organization, which has been linked to the Chinese Communist Party, as a source.

The Epoch Times has faced censorship on reporting about a laboratory in Wuhan, based on an article written by a researcher who worked there. Facebook has promised $1 million in grants to organizations that do so-called fact checks as well as $100 million in investments to support journalists.

“As a matter of public health, these moves are entirely prudent. But as a matter of free speech, the platforms’ unconstrained power to change the rules virtually overnight is deeply disconcerting,” Evelyn Douek, an affiliate at Harvard University’s Berkman Klein Center for Internet and Society, argued in an article for The Atlantic.

“Unlike most countries’ emergency constitutions, those of major platforms have no checks or constraints. Are these emergency powers temporary? Will there be any oversight to ensure these powers are being exercised proportionately and even-handedly? Are data being collected to assess the effectiveness of these measures or their cost to society, and will those data be available to independent researchers?”