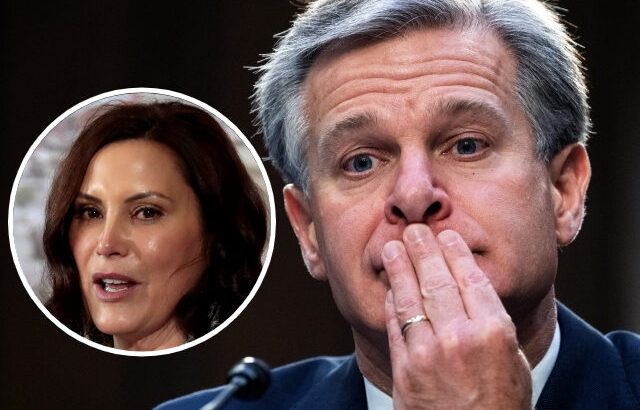 FBI Director Christopher Wray — while being questioned under oath by Sen. Ted Cruz (R-TX) — admitted that the FBI special agent who was in charge of the Detroit Field Office during the “entrapment” kidnapping attempt on Michigan Gov. Gretchen Whitmer (D) now oversees the D.C. office and the investigation into January 6.

Cruz described the case against individuals who attempted to kidnap and murder Whitmer as an “absolute debacle.”

The senator noted that out of the four people who went to trial, two were acquitted and two received mistrials, explaining that no one was convicted of any charge and that the “basis of the defense was entrapment, that the FBI, that paid enforcements for the FBI had suggested and had incited the conduct.”

Wray could not say if any FBI agent had received discipline or was reprimanded after “the misconduct that led to every defendant being acquitted or having a mistrial on every charge.”

Cruz outlined that the special agent in charge of the Detriot Field Office, Steven D’Antuono, went on to become the assistant director in charge of the Washington, DC office, which Wray confirmed.

Cruz: The special agent in charge of that case has now been sent to D.C. to the Washington, DC office and now leads the investigation regarding January 6. Is that correct?

Wray: That doesn’t sound right to me.

Cruz: That does not sound right, that the name of the individual is Steven D’Antuono? He was run out of the FBI Detroit Field Office.

Cruz: So the guy in charge got promoted and is now in charge of the January 6 investigation.

Cruz: That is astonishing.

The senator also mentioned that the Washington, DC office, which the FBI special agent is now in charge of, oversees the investigation into January 6, 2021.

Jacob Bliss is a reporter for Breitbart News. Write to him at jbliss@breitbart.com or follow him on Twitter @JacobMBliss.