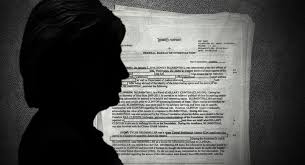 The FBI has released 277 pages of redacted records that show the FBI failed to produce information from an August 2015 meeting with Intelligence Community Inspector General about Hillary Clinton’s email server. The FBI claimed that notes are “missing” and the CD containing notes from meeting is likely “damaged” irreparably.

Given the FBI’s repeated intransigence over the years in responding to our FOIA requests, I’m not of a mind to assume this story represents simply an innocent mistake.

The records, which were posted on the FBI’s website, are the 32nd release of documents in response to our 2016 Freedom of Information Act (FOIA) lawsuit, Judicial Watch v. U.S. Department of Justice (No. 1:16-cv-02046). We filed the lawsuit after the Justice Department failed to comply with a July 7, 2016, FOIA request for:

Included in the documents are February 2019 FBI electronic communications documenting the damaged CD and the missing notes from the August 3, 2015, meeting between FBI special agents and the ICIG about Clinton’s server:

For reference, Special Agents (SAs) [redacted] have been gathering and copying materials from the captioned case located in the Washington Field Office (WFO) CI-13 Workbox in response to a Freedom of Information Act (FOIA) tasking from Information Management Division (IMD; formerly known as Records Management Division).

On or about February 6, 2019, SAs [redacted] opened [redacted]-CYBER-1A27, which contained a CD with a crack on it (a damaged CD). SA [redacted] attempted to copy the damaged CD at the WFO Computer Analysis Response Team (CART) self-service area, but was not able to do so. SA [redacted] spoke with FBI information technology specialists on the ground floor of WFO regarding the damaged CD, who indicated it was unlikely the CD could be copied.

The electronic communication regarding the missing “Notes from Meeting” says:

On or about February 4, 2016, Special Agents (SAs) [redacted] attempted to locate [redacted] 1A4, described as “Notes from Meeting” acquired by [redacted] (see referenced serial). The SAs looked through all case materials in the CI-13 file and workbox area, however they were not able to locate this item.

As such, WFO CI-13 considers the item missing and will enclose this document into 1A4 as a placeholder until the missing item is located.

The email referred to in the electronic communication on the missing “Notes from Meeting” reads as follows:

I actually remember turning over my original notes for the file for this (it was right at the beginning of the case). I gave them to [redacted] who was running the file then. The only question will be whether or not I kept a copy for myself. I’ll look and see what I have.

Republican Rep. Louie Gohmert (R-TX) said during a hearing with Strzok that in 2015 ICIG investigator Fred Rucker advised Strzok of an “anomaly” on Hillary Clinton’s emails going through the private server. The forensic analysis found that all of those emails except four – over 30,000 – “were going to an address that was not on the distribution list.” It was later reported that it was a “Chinese state-owned company” that hacked Clinton’s server. The ICIG referred the Clinton email investigation to the FBI on July 6, 2015, just under a month before the meeting for which the notes were “lost.”

The document production contains emails between Justin Cooper (the former close aide to Bill Clinton, who helped set up Hillary Clinton’s email system) and Huma Abedin regarding an attempted breach of the Clinton email server. On January 9, 2011, Cooper emailed Abedin: “I had to shut down the server Someone was trying to hack us and while they did not get in i didnt [sic] want to let them have the chance to. I will restart it in the morning.” Despite Abedin’s having explicitly warned Sullivan and Mills that Clinton’s unsecure non-government server had been attacked, the documents contain handwritten FBI notes of Abedin’s 2016 FBI interview in which she told agents she didn’t recall any hacking attempts.

The Obama FBI was frantic to target then-candidate Trump while magically losing or destroying important evidence in the sham investigation of Hillary Clinton’s illicit email system. This new information underscores the need for a fresh, unbiased investigation into the Clinton email scandal.

In a related case, we recently obtained documents from the DOJ showing that on August 5, 2016 – a month after Comey’s exoneration of Clinton – FBI officials Lisa Page and Peter Strzok and Jonathan Moffa were notified by a FBI assistant general counsel from the national security law branch that several FBI 302 interview reports were in need of processing:

Today [Redacted] brought over additional 302s from the WFO [Washington Field Office]. Are those supposed to go through the redaction process for production to DOJ on Monday? We’re trying to figure out what needs to be completed this weekend.

Page responded by writing to Strzok, Moffa and others that four FBI 302 reports of interviews related to the Clinton “Midyear Exam” investigation had never even been written:

[Redacted] to the best of my knowledge, yes they will when Pete identified for [redacted] the DOJ edits that needed to be made to the 302s [redacted] discovered that there were four (I think) 302s that had never been written. What I don’t know is whose 302s they are but unless Pete or Jon are able to respond in short order, I would throw them on the pile for redactions. Thanks so much.

Additionally, we recently filed a lawsuit against the Office of the Director of National Intelligence for details of a meeting with the FBI regarding national security threats associated with former Secretary of State Hillary Clinton’s “private” email system.

As you can see, Judicial Watch is the nation’s leader in exposing the corrupt FBI cover-up of the Hillary Clinton email scandal and concurrent illegal targeting of President Trump.  And there is more to come.