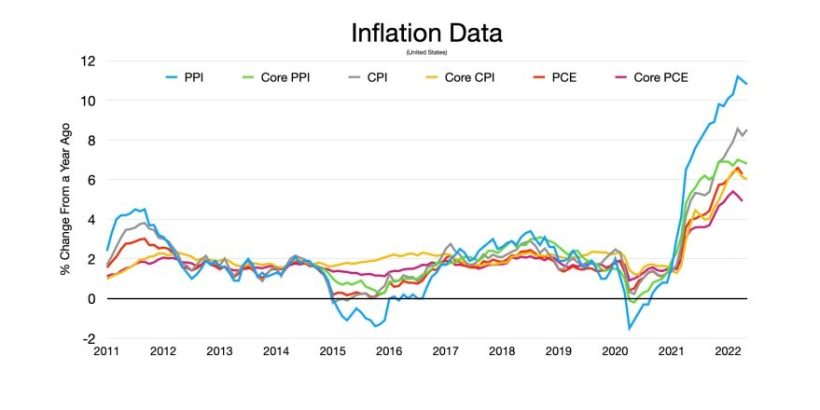 Powell made the admission during a Senate Banking Committee hearing after Sen. Bill Hagerty (R-Tenn.) questioned the Fed chairman over whether or not he believed Ukraine is the “primary driver of inflation in America.”

“I realize there are a number of factors that play a role in the historic inflation that we’re experiencing—supply chain disruptions, regulations that constrain supply, we’ve got rising inflation expectations and excessive fiscal spending, but the problem hasn’t sprung out of nowhere,” Hagerty said.

The lawmaker went on to note that inflation was 1.4 percent in January of last year and that by December of the same year, it had risen to 7 percent, marking a fivefold increase.

Since Russian troops invaded Ukraine on Feb. 24, inflation rates have continued to soar across the United States, rising incrementally to reach a high of 8.6 percent in May, forcing many Americans to tighten their belts and sparking fears of an economic recession.

Responding to Hagerty’s assertions, Powell admitted that inflation levels were already high prior to Russia’s invasion of its neighbor.

“No, inflation was high … certainly before the war in Ukraine broke out,” Powell told lawmakers.

“I’m glad to hear you say that,” Hagerty responded while noting that the Biden administration “seems to be intent on deflecting blame” and had “just this past Sunday, spread the misinformation that Putin’s invasion of Ukraine is the ‘biggest single driver of inflation.’”

“I’m glad you agree with me that that is not the truth,” Hagerty told Powell.

The White House has for months maintained that soaring inflation levels are due to Russian President Vladimir Putin’s invasion of Ukraine, or what Biden officials refer to as “Putin’s price hike.”

“With the biggest single driver of inflation being Putin’s war against Ukraine, [Biden] has taken action to blunt the impact of Putin’s Price Hike for families,” the White House wrote.

But some Republican lawmakers and other experts have long insisted that the ongoing conflict between Russia and Ukraine is not the central reason for soaring inflation and volatile oil prices, and have instead pointed to a number of Biden’s policies.

Last year, the president pulled the plug on the Keystone XL pipeline which was set to bring 900,000 barrels a day of crude oil from Alberta to refineries on the U.S. Gulf Coast, citing predicted impacts of climate change.

Republicans and advocates of the $9 billion pipeline had long argued that it would benefit the country, drastically cutting gas prices for Americans.

Meanwhile, the Biden administration’s sizeable fiscal support measures aimed at bolstering the economy during the COVID-19 pandemic, such as the $1.9 trillion American Rescue Plan Act in March 2021 and the $1.5 trillion Omnibus Spending Act in March 2022, also played a part in inflation.

Research from the Federal Reserve Bank of San Francisco published in March noted that this may be the case (pdf).