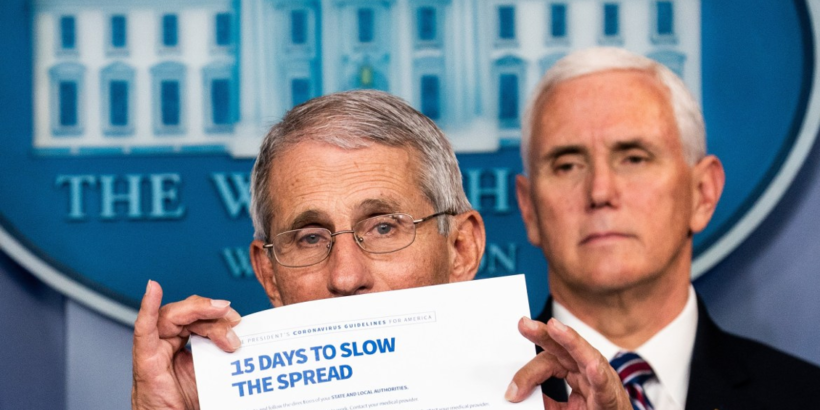 Fauci is VESTED in COVID-19

He holds PATENTS on – not one – but four key HIV components of the COVID-19 lab-created virus. 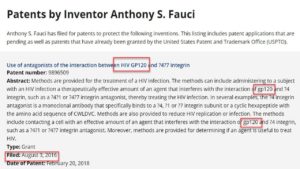 How is this not a conflict of interest?

Follow the Money –  No wonder he’s so front and center in this craziness.

Why does Dr. Anthony Fauci’s name appear on 4 U.S. patents for a key glycoprotein that appears to have been inserted into a SARS virus chassis to create the current COVID-19 epidemic?

The legal portal Justia.com lists the following “patents by inventor Anthony S. Fauci” involving a glycoprotein found in the HIV-1, a disease that attacks the human immune system, leading to the Acquired Immune Deficiency Syndrome, more commonly known as AIDS.  In 1990, Fauci held the same position at the NIH that he holds today. Fauci made his mark around the anti-viral medications that were developed by Big Pharma to combat the AIDS epidemic raging at that time.

This same glycoprotein, identified as Glycoprotein 120, or simply as GP120, has also been found to be a key component of the current COVID-19, a disease that appears to combine a HIV-1 attack on the human immune system, with SARS CoV-1, the pathogen from the original SARS (“Severe Acute Respiratory System”) that created an international pandemic in 2002-2003.  The pathogen in COVID-19 is named SARS CoV-2 in medical scientific literature.

The four patents on which Fauci is named as an inventor are the following:

An article published by a group of medical scientists in India in the medical science journal BioRXiv in January 2020 was entitled “Uncanny similarity of unique inserts in the 2019-nCov spike protein to HIV-1 and Gag.”

In a highly controversial finding, the medical scientists in India reported: “We found 4 insertions in the spike glycoprotein (S) which are unique to the 2019-nCoV and are not present in other coronaviruses.  Importantly, amino acid residues in all 4 inserts have identity or similarity to those in the HIV-1 gp120 or HIV-Gag, all of which have identity/similarity to amino acid residues in key structural proteins of HIV-1 is unlikely to be fortuitous in nature.”

The article almost immediately was withdrawn after disinformation experts recognized the medical scientists in India were suggesting that COVID-19 was created by inserting the particular glycoprotein from the HIV-1 disease that involve patents held by or applied for by Fauci.  Even more upsetting to disinformation operatives was the suggestion that the insertion of these 4 inserts into a SARS virus is not likely to occur in nature.

The clear suggestion was that COVID-19 was laboratory-created, possibly as a bioweapon, and that the creator of the virus used GP120 to do so, a glycoprotein from the HIV-1 1990s era  that tied back to Fauci.

Bonnie Nirgude‘
As a citizen journalist and investigative reporter, I am committed to accurately reporting the news. Wide awake, never asleep, I grew up in a 1960’s patriotic household, aware of the truth behind the false narrativ