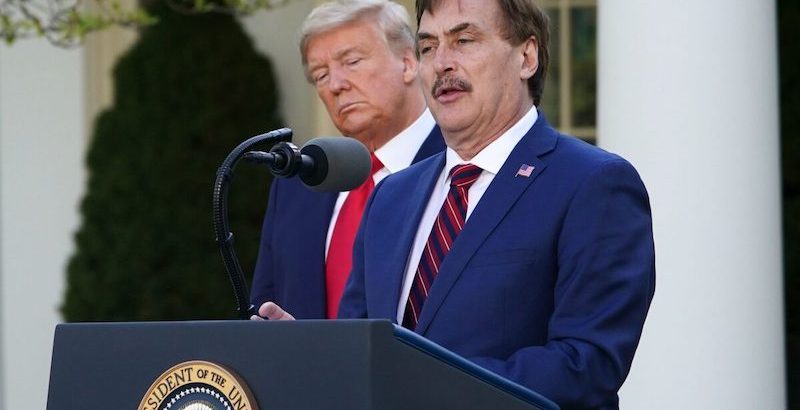 This platform will give way to 1st Amendment rights, truth about voting machines being illegally connected to the internet, vaccines and borders.

The movie, Absolute Interference Mike, along with Gen. Mike Flynn, expose the level of corruption of foreign and domestic interference in our previous elections. Every American must know this!

Please click on FrankSpeech.com to watch this never before seen proof of attacks against the American people and the U.S. Constitution.

MyPillow CEO Mike Lindell launched a new social media platform, “Frank,” on Monday morning, but users aren’t yet able to set up profiles to interact on the platform.

“Frank was attacked, it’s the biggest attack in history next to the election,“Lindell said in the livestream, suggesting that the platform is facing cyberattacks “from all over the world.”

Lindell made the remarks as he is holding a 48-hour live stream as a “backup plan.” The livestream had around 15 million views at around noon, increasing to about 90 million at 10 p.m., Lindell said.

Noting that he’s received death threats, Lindell said he has his own servers so that when the website goes operational, it won’t be vulnerable to being shut down by third-party providers. Earlier this year, social media website Parler was effectively de-platformed after Amazon Web Services took it down, and after Google and Apple removed it from their respective app stores.

During the livestream, Lindell also took aim at fact-checkers, saying that “Facebook decides what to do after the fact,” and noting that sometimes fact-checkers give the right information—but Big Tech platforms impose their own views.

Joined by retired Lt. General Michael Flynn, conservative musician Ted Nugent, and Steve Bannon on the stream, the MyPillow CEO said he is optimistic amid the cyberattacks and described it as the “bad part of the movie.” But it’s also the “best part of the movie” because, according to Lindell, he believes the best part is about to come, praising the constitutional principles and emphasizing the importance of divine laws.

“[People] want to hear this call for freedom, we are having a reformation or a revival,” said Flynn. “American people are starting to wake up, the world’s people are beginning to wake up.”

“We should be fearless about our beliefs,” Flynn said.

“This is the turning point in history,” Lindell declared. “They are not taking out rights and free speech.”

Last month, Lindell told The Epoch Times that the platform will be able to host up to a billion users.

“I believe it will handle upwards of a billion. If it doesn’t, we will get to that capacity. I don’t think that’s exaggerated, by any means,” he said.

The core idea of the platform is to uphold free speech, based on the original founding principles of the Judeo-Christian worldview, according to Lindell. During the livestream, Lindell talked about how the United States was founded as a constitutional republic that is in accord with the laws of the divine.

Profanities and using God’s name in vain will not be allowed on the platform. Death threats and pornography are also banned.

Lindell also announced a lawsuit against Dominion Voting Systems on Monday, calling it “the most important case in history for your First Amendment rights.” It came weeks after Dominion sued the MyPillow CEO for defamation.