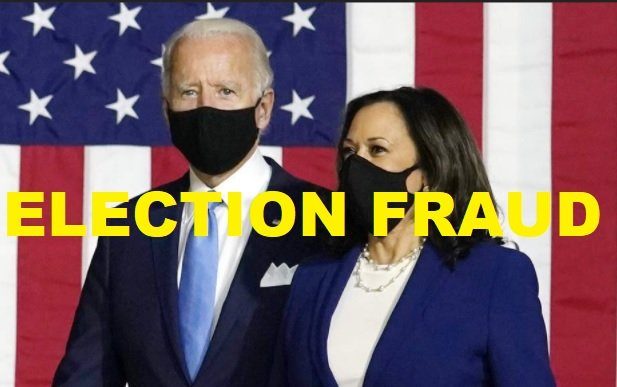 Records obtained by Just the News provide unprecedented glimpse into human adjudication of thousands of ballots, where marks for candidates like Trump were sometimes removed so ballots could count for Biden.

A day after the November election, as Donald Trump and other Republican candidates clung to evaporating leads in Georgia, vote counters in Atlanta were confronted by a paper ballot known only by its anonymizing number 5150-232-18.

A Dominion Voting machine had rejected the ballot on election night because the voter had filled in boxes for both Trump and his Democratic opponent Joe Biden, an error known as an “overvote.” The machine determined neither candidate should get a tally, and the ballot was referred for human review.

The image of the ballot, obtained by Just the News, shows the voter messily scribbled a large blob in the box to select Trump as president while also putting a thinner check mark next to Biden’s name.

At 6:10 p.m. ET on Nov. 4, 24 hours after the ballot was first scanned and rejected by Machine 5150, a panel of humans decided the vote should be awarded to Biden, with the notation “mark removed for Donald J. Trump.”

Scores of additional ballots that same day had checks manually removed next to Trump’s name as well as many other candidates up and down the ticket — Libertarians, Democrats and write-ins alike — and the votes awarded instead to other candidates.

Welcome to the arcane process known as adjudication, where human judgment is substituted for machine scanning in cases where voters incorrectly filled out a paper ballot. Election officials and official observers have dealt with it for years, with everyday citizens mostly oblivious to the process.

But in 2020, adjudication played a much larger role in states like Georgia, which allowed hundreds of thousands of additional citizens to vote absentee for the first time during the COVID-19 pandemic.

In all, more than 5,000 of the 148,000 absentee ballots cast — or about 3% — in Georgia’s largest county required some form of human intervention, according to logs obtained from Fulton County by Just the News under an open records act request.

The adjudication ballots alone are not enough to change a Georgia election in which Biden and Trump were separated by less than 13,000 votes. However, they reveal an imperfect system vulnerable to chaos, subjectivity, or political dirty tricks, especially in a county like Fulton where state officials documented widespread irregularities and misconduct and now want to take over election counting.

Just the News reviewed 1,604 pages of adjudication logs from Fulton County and reviewed 4820 of the 5064 ballot images where human vote counters reviewed or overrode the Dominion Voting machines. The JTN review provided an unprecedented window into the extraordinary discretion accorded adjudication judges to interpret a voter’s intent on a flawed ballot.

It also raised another troubling question, at least in Georgia, where election regulations create two conflicting imperatives. One regulation, which is quoted on each absentee ballot, emphatically declares that a paper ballot should be deemed “spoiled” and uncountable if a voter makes any mistakes or unauthorized marks.

Just the News reviewed hundreds of ballots that met the “spoiled” definition — ballots that voters had in some way altered, defaced, or corrected — that were still allowed to count after adjudication. The reason? Another Georgia regulation gives election officials broad discretion to try to determine the intent of a confused voter, and actually encourages them to find a way to make flawed ballots count.

The Georgia code stipulates that voting tabulators must be programmed to “reject any ballot, including absentee ballots, on which an overvote is detected,” with those ballots to be “manually reviewed” by a review panel following their rejection.

If a voter “has marked his or her ballot in such a manner that he or she has indicated clearly and without question the candidate for whom he or she desires to cast his or her vote,” the state code says elsewhere, then the ballot “shall be counted and such candidate shall receive his or her vote.”

Yet state law also directs that a ballot should be considered “spoiled” if, in part, a voter has used it to “cast more than the permitted number of votes.” A spoiled ballot “shall not be reinstated,” the code states, suggesting that any ballots deemed as such should not be counted.

Instructions on the Georgia Secretary of State’s website, meanwhile, suggest that voters have no choice but to declare their ballots spoiled in the event that they make a mistake on it.

“If you inadvertently make an error, spoil, or otherwise deface the ballot, IMMEDIATELY contact your local county board of registrars or the municipal absentee ballot clerk, whichever is applicable, to receive a replacement ballot,” the instructions dictate.

Just the News identified hundreds of ballots that met that definition but nonetheless were counted as lawful votes after election judges intervened. Some counted ballots even had the word “spoiled” written across them and still were counted.

For instance, “spoiled” was clearly written on ballot number 729-98-76, which had boxes for both Trump and Biden selected. Election judges awarded the vote to Biden and removed the mark for Trump.

But another ballot, 5162-207-61, had the word spoiled written on it and a vote solely for Trump. But it was rejected by the same process, showing just how uneven the system was.

Secretary of State Brad Raffensperger’s office said it did not have an immediate response on whether such spoiled ballots should have been allowed to go to adjudication, saying it was studying the matter. Raffensperger has said, however, Fulton County’s election processes are so flawed he believes the state of Georgia should take it into receivership.

State officials said Fulton County should have adjudicated ballots using a panel of two Democrat judges, two Republican judges and one independent judge, but they did not know for sure whether each ballot went through that process.

Fulton County refused to answer any questions about the records they provided to Just the News.

But Bridget Thorne, who has worked for years in various election jobs in Fulton County, said officials there did not have clear instructions for handling spoiled or adjudicated ballots last fall.

“According to a Fulton County Board member, there were no written adjudication processes given to adjudicators,” Thorne told Just the News. “Processes were given verbally. In the event the Democrat and the Republican adjudicators could not agree, [county executive] Ralph Jones would decide.

“Based on my experience, it is not surprising that they did not have a standard written process for adjudicators,” she added. “An internal audit financial report that came out on Wednesday also states that they are missing Standard Operating Procedures (SOP).”

The Just the News review shows adjudication judges have the power to “remove marks” and or “add marks” to reflect a voter’s assumed intention and did so hundreds of times in Fulton County alone. They also can reject them. And at least in Georgia last November, they made such decisions one to four days after Election Day had ended, when preliminary vote counts showed who was leading or losing in close races. The entire scenario makes some extremely squeamish.

Scores of adjudicated ballots ultimately were resolved with the notation “removed mark” next to Trump’s name, in most cases allowing a second mark next to Biden’s name to count. But at times it happened in reverse too, or to the detriment of third-party candidates.

Ballot number 729-4-39, for instance, included blob marks for the Libertarian candidates for president (Jo Jorgensen) and U.S. Senate (Shane Hazel) as well as Democrats Biden and Senate winner Jon Ossoff. The adjudication team awarded the ballot to Biden and Ossof, the logs and ballot images showed. To do so, they had to remove the marks for the Libertarian candidates.

On another ballot, a voter messily scribbled in the bubble to select Donald Trump as president; the voter also gave a small check mark next to Joe Biden. The adjudication log shows the choice being flagged as an “over-vote,” after which an adjudication review awarded the ballot to Biden.

In one particularly striking example, a ballot clearly marked “spoiled” was apparently adjudicated and counted by an election staff worker, raising the question of whether or not that voter or other voters managed to vote twice in the election. In that case, Trump would have been the beneficary.

In all, 1,341 marks were removed from the names of candidates on the 5,000 ballots, a computer analysis of the logs showed.

The alteration and counting of flawed ballots were spread across all races, including state constitutional amendments and local legislative campaigns.

One of the clearest patterns involved the highly watched special U.S. Senate election that pitted Republican incumbent Sen. Kelly Loeffler against Democratic activist Raphael Warnock. The Just the News review showed the design of the ballot by Raffensperger’s office clearly confused many in the race because it offered 20 candidates, most of them Democrats. Voters often selected two or more of a party’s candidates, causing their votes ultimately to be rejected even after adjudication. Democrats were more likely to be negatively affected in that instance.

Just the News is fighting for adjudication logs in other states like Arizona, where its largest election metropolis, Maricopa County, recently told the news organization there were about 27,000 adjudicated ballots in November but so far has refused to provide the logs or images.

The release of the ballot images comes after a bombshell Just the News report that revealed an election watchdog’s searing criticism of Fulton County’s handling of the absentee ballot counting process at Atlanta’s State Farm Arena. The watchdog, Carter Jones — who had been assigned by Raffensperger’s office to monitor the State Farm Arena operations — highlighted what he said were several key security problems with the absentee ballot operation there.

Jones at one point wrote of witnessing absentee ballots arriving at the arena “in rolling bins 2k at a time.”

“It is my understanding is that the ballots are supposed to be moved in numbered, sealed boxes to protect them,” he wrote, also noting “too many ballots coming in for secure black ballot boxes.”

Jones also made numerous citations raising concerns about how absentee ballots and spoiled ballots were handled. Here are some direct excerpts from his notes:

With such chaos and mismanagement observed by the state, some wonder whether any of the adjudicated ballots were counted correctly and consistently in Georgia’s biggest metropolis, or other major urban areas for that matter.

“Similar actions took place in Detroit, Philadelphia, Green Bay and other major urban centers in swing states where tens of thousands of ballots were interpreted and counted by review panels,” said Phill Kline, the former Kansas attorney general and head of the Amistad Project, which has filed lawsuits to gain transparency in elections nationwide. “This happens every year. But in 2020 laws requiring both parties to review this process weren’t followed.

“With COVID as an excuse, election observers were kicked out of the counting room and private billionaires invited in,” Kline added, citing Mark Zuckerberg’s donations to election judges. “Americans deserve to know how this shadow government managed the election, and state election officials, rather than fighting efforts to understand what happened, should open the doors and support the effort to get at the truth!”