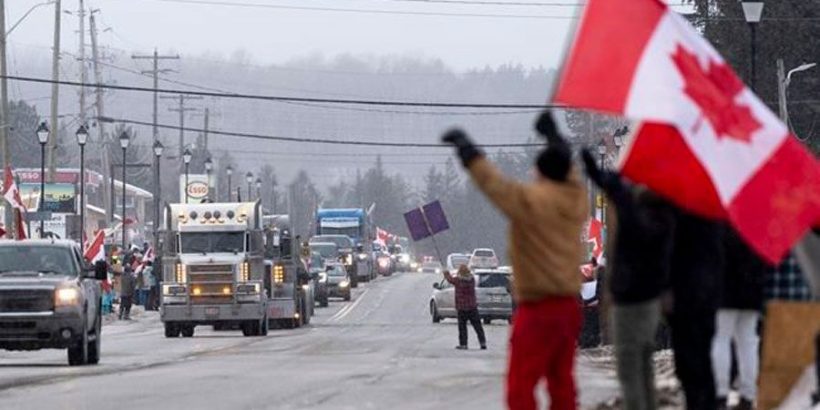 American truckers protesting against vaccine mandates and government overreach have been joining a record-breaking Canadian convoy of tens of thousands of vehicles headed to Ottawa.

Brian Von D, the administrator at “Convoy to DC 2022” announced that they will “join forces” to ride from California to Washington, adding that “America is next.”

“As [the Canadian convoy] moved from the west to the east, [the American truckers] have been filtering into this convoy, and it is absolutely massive. It is known worldwide, it is the largest thus far,” he said in a live video on Facebook.

Tens of thousands of vehicles were reported to have departed from all parts of Canada.

A large number from the United States have been joining along the way.

Brian clarified that some numbers “running around” on social media about the trucks joining the convoy are not correct.

“A post says 100,000 to 5,000. Those aren’t correct. Somebody made those numbers up. There’s no way for us to put a number on exactly how many United States trucks have gone over there.”

Speaking about the upcoming U.S. convoy, he said “it will start in California and it will end in DC and we’re gonna stay there, just like Canada is doing,” Brian said. “You’re gonna have your main artery … everybody will join in as they go down the interstate to DC.”

He added that dates and planned routes would be released soon on a website and various social media platforms, and a GoFundMe page would only be released on their CONVOY TO DC 2022 Facebook page.

“We’re done with the mandates, were done with the government telling us what to do, we will continue and we will follow just like the rest of the world on these trucker protests, and they will be 100 percent legal, they will abide by the law.”

Brian added that nobody has been kicked out of the convoy so far for failing to abide by agreed-upon terms.

“It’s been a unity that I’ve never seen before, not anywhere in the north. Canada has definitely shown that—the most peaceful protest in the convoy I have seen to date,” Brian further stated. “America, it’s your turn, it’s your turn to step up and show what you’re made of.

“We don’t care what side you’re on, we don’t care where you’re from, if you live in America, in Canada, or anywhere you may come from, we’re doing it for you,” he said.

Businesses of different sizes, as well as families in the two countries, have helped the convoys with food, shelter, and gas.

As they passed through different cities, videos on Facebook show they were greeted with long rows of people cheering and holding Canadian flags, with some shooting off fireworks.

He added that they’re also doing it for the trolls that are disrupting their various pages.

“We’re actually doing it for the trolls too. So they can work and live their lives too. So it doesn’t matter. We love you all. America, it’s time to stand up. Welcome to the finale of the show. We love you. God bless you.”

The massive event has seen little reporting so far by the corporate media. Canadian Prime Minister Justin Trudeau called the “people who are on their way to Ottawa” a “small fringe minority” that is “holding unacceptable views” during a press conference on Jan. 26.

He then announced on Jan. 27 he came into contact with someone infected with COVID-19 and has gone into self-isolation.

He told The Canadian Press that he tested negative, feels fine, and has no symptoms.

Brian said that during the pandemic, truckers were not able to pull in to eat or shower freely due to their not having been considered essential, and didn’t receive funds or stimulus checks.

The government has “completely extended their arm and their reach to control for far too long and far too easy and made money off of you. To tell us what to do.

“We elected those officials in, now it’s time to elect them out. It’s all by design so you can see the corruptness and you’re awake to it. There is no hate in this group,” Brian added.

“The government overreach is coming to an end, and this is how we do it.

“If you go back to America, in 1776, it took one shot to be heard. The British came over, an entire army came over. And it was villages that beat the British, an entire army,” Brian noted, “Well, we don’t do it that way anymore. It’s not violent like that anymore.

Brian added that they “had a plan” that “has worked to a T.

“All you do is get in and drive and be a part of something that is now making history that will be in the history books, it will forever be known in 2022 that you are part of this worldwide movement. You, not us. We’re together with you. We’re just the voices to get it out.

“One voice can be heard worldwide. And that’s through you the people.”

“Our wonderful country is mobilizing! People who have been numbed and stunned over what has transpired over the past two years are waking. They are now doing and we are coordinating and moving in an intentional manner,” Steele told The Epoch Times.

Steele said that Australia is mobilizing its own convoy now, and more rally points in the United States are being established, with thousands to attend at each one.

“We are taking our country back. Make no mistake, we the patriots and freedom lovers are the majority. The 20-25 percent that want socialism or communism that is the MINORITY. It doesn’t matter right now who is left or who is right, none of that matters if we lose our freedom. Freedom is a banner we can all rally under. Liberty crackles through all of our veins. God bless our Canadian brothers and sisters for reminding us we are fighters! Thanks for the nudge. We are awake. AWAKE. I saw a post on a Canadian site that said ‘you woke the sleeping lions.’ Well, America just got a wake-up call from our Canadian neighbors, and guess what? I’m putting the world on notice. They woke the fire-breathing dragon!!” Steele further noted.

Other countries such as Brazil have organized their own convoys, expressing solidarity for the cause.