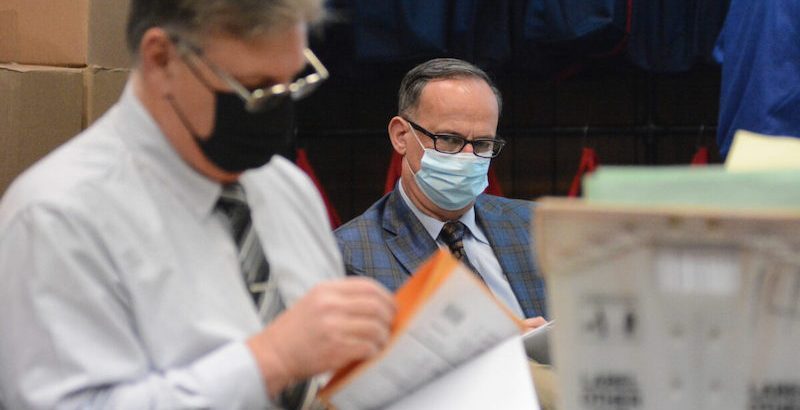 A Pennsylvania senator announced on July 7 that he has triggered a forensic investigation of the 2020 and 2021 elections.

State Sen. Doug Mastriano, a Republican, issued letters to several counties requesting information and materials that he said would enable an investigation.

“It’s distinct from an audit or forensic audit. It’s a big deep dive, like we saw in Arizona, but even deeper,” Mastriano told The Epoch Times.

“It takes a hard look at software, machine, scanners, in addition to looking at all the ballots themselves to see if they were hand-filled-in or copied by a machine. So a scientific approach to get to the bottom of what happened, what went right, what went wrong in an election. It takes out all bias.”

Philadelphia County received a letter, as did two that lean Republican: York and Tioga counties.

They were asked to send over hard copies of ballots and other election materials. Mastriano expects a court battle to play out and is ready to go to his committee and request subpoena power if the counties don’t comply or indicate their willingness to comply by July 31.

“We do want to be clear, however, that Senator Mastriano’s letter reiterates claims about the November 2020 election that have been resoundingly rejected by courts. The repetition of baseless claims by elected officials poses a real challenge to our democratic processes. We are committed to continuing the hard work of ensuring that Philadelphians are able to exercise their right to vote,” he said in an email.

A York County official acknowledged receipt of Mastriano’s requests but declined to comment. Tioga County did not respond to a request for comment by press time.

In an op-ed sent to news outlets, Mastriano charged that there’s a strong case for an investigation, noting that 2.7 million mail-in ballots were counted in the 2020 election, compared to just 263,000 in the prior presidential election. He also noted that many of the ballots were counted without signature verification.

“It would defy logic to assume that an election with the kinds of drastic changes we saw in 2020 was run perfectly with zero errors or fraud,” he said.

Federal law mandates that counties keep records like those being sought, for 22 months after an election. The counties were told to produce the information by July 31.

The Pennsylvania Department of State, which said a risk-limiting audit of the 2020 election has confirmed the election results, didn’t respond to a request for comment by press time.

Pennsylvania Attorney General Josh Shapiro vowed during an appearance on MSNBC this week that he would fight back if lawmakers tried to trigger an Arizona-style election review in Pennsylvania.

“I’m absolutely confident,” Shapiro said when asked if he could stop an audit or probe.

Pennsylvania Senate Minority Leader Jay Costa said on July 7 that he opposes the investigation for a number of reasons. He alleged that Mastriano’s panel doesn’t have authority over election activity and that even if it did, such an investigation would be redundant because “the 2020 election has been audited and reviewed extensively.”

“The results of the 2020 election have been challenged in the courtrooms of 86 judges and upheld initially in 85 of them; the 86th was ultimately decided against former President Trump as well. The Pennsylvania Department of State has also already completed statistical sampling as required in Title 25 and a pilot risk-limiting audit,” he said in a statement.

An election assessment conducted in Fulton County, Pennsylvania, uncovered several major issues, but the team that performed the review alleged that the election was well-run and that there were no signs of fraud despite the problems.

Mastriano hasn’t yet chosen firms to carry out the new probe, but told The Epoch Times that he would prefer to hire the companies conducting the audit in Maricopa County, Arizona.

Mastriano joined two other Pennsylvania Republicans in a trip to Phoenix last month to observe firsthand the audit taking place in the county. The delegation expressed hope for a similar review in their state after the trip, and a different committee chairman has said he supports carrying out an audit, though he hasn’t initiated a review.

“The only way I could see ahead of this, [to put] this all to rest and let the cards fall where they may, [is to] do a scientific forensic audit, like Arizona. I don’t see any other way to address this,” Mastriano told The Epoch Times after visiting the audit.

He said he would prefer a statewide audit but would settle for a review of several counties.

Mastriano has said the effort wouldn’t seek to overturn the election results. Democrat Joe Biden beat former President Donald Trump by about 80,000 votes in the 2020 election.