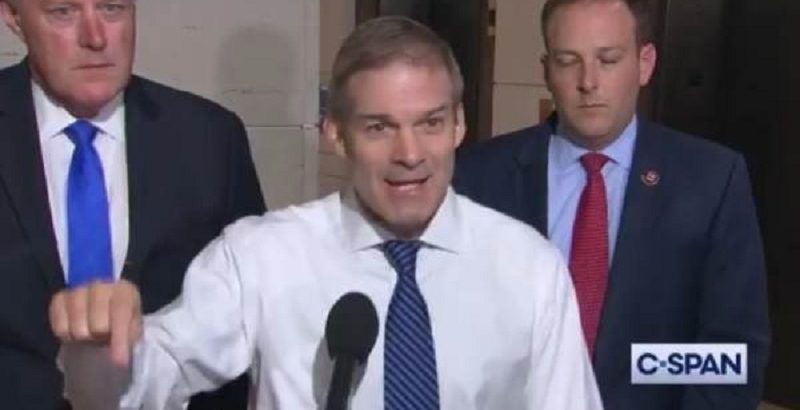 In a memorandum obtained by The Gateway Pundit sent to Republican members of the House Intelligence Committee, Committee on Oversight and Reform, and Committee on Foreign Affairs, the GOP countered all of the ‘evidence’ provided by the Democrats to launch an impeachment inquiry into President Trump.

“The evidence, however, does not support this allegation,” Republican staffers began in an 18-page memo.

Republicans also pointed out that Ukraine has a “long history of pervasive corruption” since it became an independent nation following the collapse of the Soviet Union.

This context shows Trump’s state of mind when he showed skepticism at releasing taxpayer-funded aid to Ukraine, and rightfully so.

“In the 49 days since Speaker Pelosi’s announcement, Rep. Adam Schiff” has been conducting the sham impeachment hearings from his “Capitol basement bunker” the GOP said, arguing that all the fact-finding is “unclassified” so the closed-door process and secrecy is “purely for information control.”

“Four key pieces of evidence are fatal to the Democrats‘ allegations. Stripping away the hyperbole and hysteria, these indisputable pieces of evidence show that there was no “Treason, Bribery, or other high Crimes and Misdemeanors,” as required by the U.S. Constitution,” the memo stated.

The best evidence of the telephone conversation between President Trump and President Zelensky is the contemporaneous summary prepared by White House Situation Room staff. As transcribed, the call summary denotes laughter, pleasantries, and compliments exchanged between President Trump and President Zelensky. The summary does not evince any threats, coercion, intimidation, or indication of a quid pro quo—as even Democrats have acknowledged.43 The summary bears absolutely no resemblance to Chairman Schiff’s self described “parody” interpretation of the call.

2) Both President Zelensky and President Trump have publicly and repeatedly said there was no pressure to investigate the President’s political rivals.

On September 25, President Zelensky and President Trump met face-to-face for a bilateral meeting during the United Nations (U.N.) General Assembly in New York. The presidents jointly participated in a media availability, during which President Zelensky asserted that he felt no pressure.

3) The Ukrainian government was not aware that U.S. security assistance was delayed at the time of the July 25 phone call.

Evidence also suggests that the Ukrainian government never even knew that U.S. security assistance was delayed until some point in August 2019, long after the July 25 phone call between President Trump and President Zelensky.

On September 11, 2019, OMB released the U.S. security assistance to Ukraine.82 Ukraine subsequently received this assistance. The U.S. disbursed this assistance without Ukraine ever acting to investigate President Trump‘s political rivals.

Republicans argued in a conclusion: Now as the Democrats move their proceedings into open hearings, their process is still one-sided, partisan, and fundamentally unfair. There is no co-equal subpoena power. There are no due process protections for the President. There is no guarantee that Chairman Schiff will call witnesses put forward by Republicans. In fact, Chairman Schiff has already denied the minority’s request to call the anonymous whistleblower whose complaint initiated the inquiry.