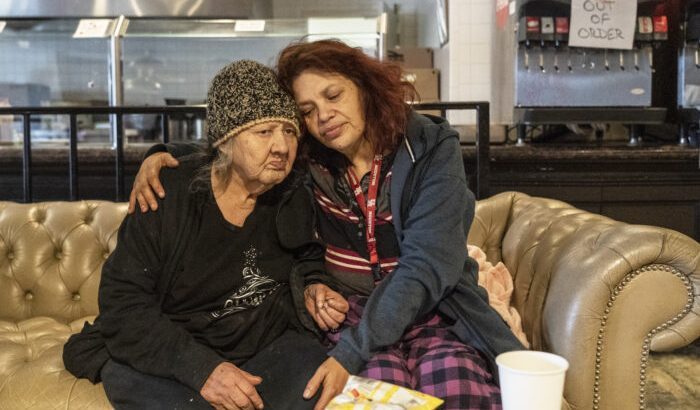 Deloris Sanchez, 56, and Mallissa Lee, 52, sit on a couch while taking shelters at Gallery Furniture store which opened its door and transformed into a warming station after winter weather caused electricity blackouts in Houston, Texas on Feb. 18, 2021. (Go Nakamura/Getty Images)

Two branches of a Texas-based furniture store chain have opened their doors up to Houston residents, many of whom have been left without running water and heat amid lengthy power outages caused by severe weather conditions in the state.

Jim McIngvale, owner of Gallery Furniture in Texas, said Wednesday that he decided to use two of his stores as warming centers, providing food, hot drinks, blankets, and warm clothing to the community.

“A lot of people are without power. Come see us until the power gets back on,” McIngvale told told KPRC.

The extreme weather has been blamed for the deaths of at least 40 people as of Thursday, some while trying to keep warm during record freezing weather in America’s central and southern states, triggered by a sudden stratospheric warming (SSW) event that began disrupting the Arctic polar vortex on Jan. 5.

The link between SSW events and climate change remains unclear. According to a recent publication from climate.gov, ETH climate researcher Daniela Domeisen says “there hasn’t been a trend in SSW frequency over the past centuries.”

“The 1990s were characterized by a long absence of SSWs, which turns out to be the longest absence since 1850—we do not currently know why,” she said.

NOAA’s Chemical Sciences Laboratory researcher Amy Butler added that “climate models do not agree about what will happen in a warmer climate.”

In the Houston area, one family died from carbon monoxide as their car idled in their garage. A 75-year-old woman and her three grandchildren were killed in a fire that authorities said might have been caused by a fireplace they were using.

“The cold is bitter, so we’re opening up the doors to Houstonians,” he said in an interview with ABC 13. “Rather than complain about what should have been done, let’s just do things that are good for the community.

McIngvale told “Fox & Friends” on Thursday that he expects a turnout of as many as 100 Texans to his warming centers over the next two days.

“The essence of living is giving,” he added.

According to Click 2 Houston, the salesman said that protocols to curb the transmission of COVID-19 will be followed.

People won’t be able to bring pets with them to the warming centers, he said.

This isn’t the first time McIngvale has converted some of his stores into warming centers during times of need.

In September 2019, he turned his mattress showroom into a temporary shelter during Tropical Storm Imelda. Before that, he made headlines when he did the same for Texans left homeless by Hurricane Harvey in 2017.

ERCOT, in a release over the weekend, suggested that residents set their thermostats to 68 degrees or lower where possible, close shades and blinds to reduce the amount of heat lost through windows, turn off and unplug nonessential lights and appliances, and to avoid using large appliances such as ovens and washing machines.