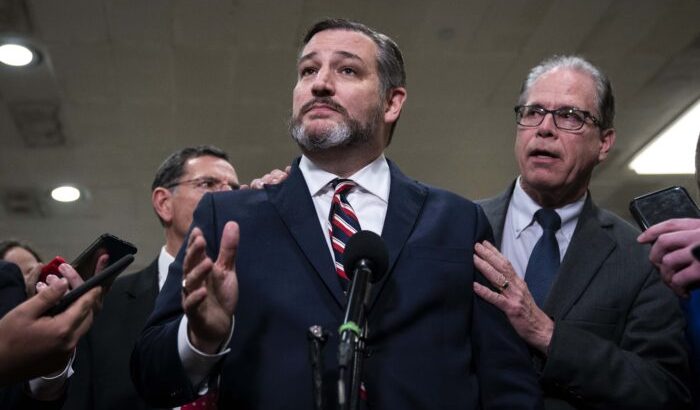 Sen. Ted Cruz (R-Texas) said Thursday that traveling to Cancun, Mexico, was “obviously a mistake” as millions of Texans lost power for days after a deadly winter blast overwhelmed the electric grid

The Republican lawmaker made the remarks to reporters outside his home as a group of protesters called for his resignation, chanting, “Ted Cruz has got to go!”

“In hindsight, I wouldn’t have done it,” Cruz said, Fox News reports. “I was trying to be a dad and all of us have made decisions, when you have two girls who have been cold for two days and haven’t had heat or power and they’re saying, ‘Hey look, we don’t have school, let’s get out of here.’

Cruz said in a statement on Thursday that, “with school canceled for the week, our girls asked to take a trip with friends. Wanting to be a good dad, I flew down with them last night and am flying back this afternoon.”

“My staff and I are in constant communication with state and local leaders to get to the bottom of what happened in Texas,” he added, referring to the power outages and, in some cases, loss of water.

He said that Texans “want our power back, our water on, and our homes warm.”

It came as photos circulating on social media showed what appeared to be Cruz at the airport in Cancun. Another photo showed a man resembling the Texas senator on a plane. Several news outlets, including Fox News, The Associated Press, and CNN reported that Cruz traveled to the Mexican resort area, although details are scant and the outlets used anonymous sources.

Amid speculation that Cruz could be tapped as the Republican presidential candidate in 2024, a bevy of celebrities and prominent Democrats—seemingly starved of engagement in the wake of former President Donald Trump’s Twitter ban—jumped at the opportunity to criticize him on social media after reports emerged of his trip. Some Democrats said Cruz should resign from office.

“That’s something that he has to answer to his constituents about,” state Republican Party Chairman Allen West, a former Congress member, told The Associated Press in response to a question about Cruz’s trip. “I’m here trying to take care of my family and look after my friends and others that are still without power,” West said. “That’s my focus.”

Many of the millions of Texans who lost power for days after the brutal cold snap overwhelmed the electric grid now have it back, but the crisis was far from over in parts of the South with many people still lacking safe drinking water.

About 325,000 homes and businesses remained without power in Texas on Thursday, down from about 3 million a day earlier. Utility officials said that limited rolling blackouts were still a possibility.

Dan Woodfin, senior director of system operations for the Electric Reliability Council of Texas (ERCOT), the organization that operates the state’s power grid, said that rotating outages for Texas could return if electricity demand rises as people get power and heating back.

Texas Gov. Greg Abbott warned that state residents “are not out of the woods,” with temperatures still well below freezing statewide and south-central Texas threatened by a winter storm.

Jack Phillips and The Associated Press contributed to this report.