BEWARE! The Election-Infection May Be In A City Near You 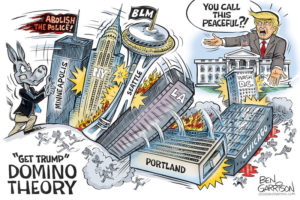 The Deep State (DS)/ Mainstream media (MSM) are fighting for their lives because they know better than anyone else, the crimes they have committed. They are trying to fool the sleepers, or get Trump out of office before Election Day.

They know they will lose and this is why we are seeing COVID, riots, fires, shutdowns, lockdowns, smear campaigns, etc. This was all planned!  Those who committed treason, know the punishment…death.

Things will get worse on the streets than they are today, but take heart, Trump’s Administration has the enemy’s playbook and knows their dirty little secrets. If the DS was really in control, there would be no rioting, no mass hysteria with a disease, no lockdown nor shutdowns. The Patriots are allowing this play out so the people will wake up to the truth!

Since wars have not worked to take down America, the DS seeks to destroy America from within by waging war against her people, her land and the Constitution. Their pawns are the voters who laugh at the thought that Donald Trump couldn’t possibly be the monster the media has painted him to be. These voters are being used by the DS, like a dirty needle, destroying America within.

Trump’s Administration wants the people to really see what the Far-Left Democrat party’s agenda is about; removing our freedom and imposing Communism. Look around; it’s here! People have been cited and arrested for not wearing masks. Party-goers were threatened with water/power being shut off due to more than the recommended allowance for in-home celebrations. People are told what they can and can’t do. America is waking up.

When Kamala Harris was a presidential candidate earlier in the year, hardly anyone had heard of her. In her home state of CA, she only had an 8% approval rating. She just kind of appeared from nowhere. Who is she? Where did she come from? 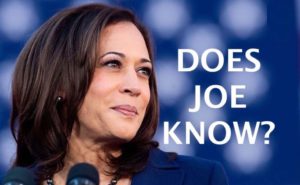 During those debates, she called Joe Biden a racist but now has agreed to be his running mate. Does he even understand what just happened? His own videos indicate incompetency. Surely Biden must know he’ll soon be swapped out for another candidate and his name won’t be on the final Democratic ticket. When will this be?

Why Harris? A Biden/Harris ticket has no way of competing against Trump. Kamala Harris has been placed on the ticket for a specific reason. In addition, Twitter hired Kamala Harris’s press secretary to decide what the President of the United States can and can’t say on Twitter. See what they did there?

General Flynn has been under criminal litigation for 4 years, spent millions of dollars, lost his home and been called a traitor. After reviewing his case, prosecutors realize Flynn did nothing wrong and moved to dismiss the charges. Judge Sullivan stepped out from under the rule of law and ruled against the prosecutor’s recommendation. This is not the role of a judge yet he refuses to sign off on the order. He was directed to delay the case as long as possible. If the original 302 is disclosed, a lot of people will go to prison, and it won’t be Flynn. The world is watching.

In Seattle, WA, the liberal city council voted to move ahead with defunding the police force. This is not what the residents want! Seattle’s police chief resigned because of this. Evil and corruption abound where there is no law and order. The DS will be bringing in other forces.  The Left is projecting what America will look like if they are in power. Is this what American’s want?

During Trumps presser (8/11/20), the DS tried to send him a message. A mobster shot at Secret Service Agents outside the White House fence. They shot back, striking the thug. The message to Trump appeared to be: we can send anyone at anytime to go after you. The message Trump appeared to send back: ‘I don’t have time for this, I have a country to run,’ and returned to the presser, seemingly un-rattled, finishing his release to the American people.

When he returned, he named those who committed treason by spying on his campaign…Obama, Biden, Comey, Page, Strzok, Brennan, Clapper and others.  Not one reporter asked any follow-up questions on accusations of treason. Who told them to stand down on this information. Who owns the media’s narrative? What have we been restricted from knowing?

When the COVID hit our country, Cuomo decided to put COVID positive patients in adult care homes, in spite of plenty of hospital and naval ship beds for these people. Thousands died! Now, Cuomo is blaming the families for their deaths! This is pure evil! These family members couldn’t even go see their loved ones. Trump is allowing New Yorkers to see Cuomo’s corruption. Vote Cuomo out!

Why is the media pushing COVID cases rather than death rate numbers? This is about the election… the election infection!  For those under 70 years of age, it is .04% less than the common flu. The DS doesn’t want Americans to vote at the polls. There they can’t cheat. If a cyber attack happens, mail-in-ballot counting cannot take place, resulting in a postponed outcome.

The Federal Election Committee Commissioner, Ellen Weintraub, confirmed the DS plan. She indicated the winner of the presidential race most likely won’t be declared on election night. She made it clear, we may have delayed results. Americans are not okay with this!

November 3 is Election Day but the DS will push for a delay. Q tells us the DS next plan will be massive cyber power attack attempts on 11/4. They must shut down the power grid to keep ballots from being counted. At all costs, they will attempt to block Trump being declared the winner. 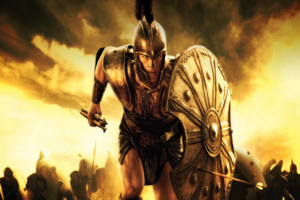 Our experience of the Q Team is that they have been placed here to give Patriots hope and direction during this storm. While attacks do occur, we are safeguarded by the US Air Force Defense Laser Code named,  ‘Black Eye,’ which protects our country. We are safeguarded and we know how to counter!

Only when evil comes into the light can we defeat it. The people cannot be told, they must be shown. This evil is what we are witnessing! Armor up, Pray! (Ephesians 6:10-18)