The Justice Department’s internal watchdog announced in an investigative summary released Wednesday that an unnamed former FBI deputy assistant director engaged in “misconduct,” including leaking “sensitive” information to the media, violating federal law by disclosing sealed court records and taking a gift from someone in the media.

Nevertheless, the inspector general (IG) indicated, without explanation, that “prosecution of the DAD [deputy assistant director] was declined.” The investigation’s findings will be referred to the FBI for potential further action, the IG said.

The official became the second high-level FBI employee to be formally rebuked by the IG over media contacts seen as improper. Former FBI deputy director Andrew McCabe was fired from the bureau in March 2018 by then-Attorney General Jeff Sessions after an inspector general report revealed that he “lacked candor” when discussing his communications about federal probes with members of the media.

The IG first indicated in its June 2018 report on DOJ and FBI misconduct that “although FBI policy strictly limits the employees who are authorized to speak to the media, we found that this policy appeared to be widely ignored during the period we reviewed.”

The IG, flagging what it called an apparent “cultural” problem at the bureau, said at the time it would announce the conclusion of multiple separate “investigations” into the matter at a later date. The Wednesday report appeared to be the opening salvo in those reports. A distinct, comprehensive IG report covering a variety of additional matters, including potential FBI surveillance abuses, is expected in a matter of weeks. 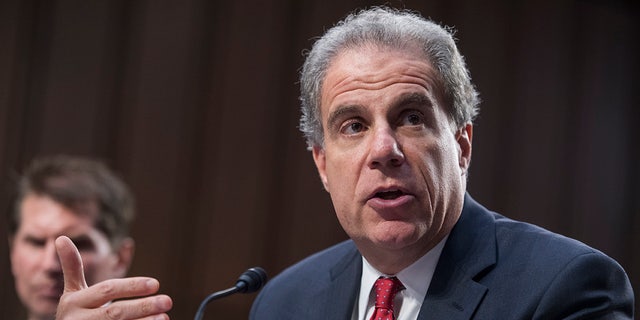 Inspector General Michael Horowitz is expected to release a report on FBI and DOJ misconduct in the coming weeks. (AP)

The investigative summary released Wednesday specifically found by a preponderance of evidence that the DAD had “engaged in misconduct when the DAD accepted a ticket, valued at approximately $225, to attend a media-sponsored dinner, as a gift from a member of the media, in violation of federal regulations and FBI policy.”

The report also assessed that the DAD “disclosed to the media the existence of information that had been filed under seal in federal court, in violation of 18 USC § 401, Contempt of Court, provided without authorization FBI law enforcement sensitive information to reporters on multiple occasions; and had dozens of official contacts with the media without authorization, in violation of FBI policy.” Contempt of court can be punished by a jail term or a fine, at the court’s discretion.

Media leaks played a central role in advancing the narrative that the Trump campaign may have colluded with Russia, and Republican lawmakers have charged that the FBI and DOJ planted sensitive information to further their own political and investigative goals.

The FBI, for example, extensively relied on news articles — including one from Yahoo News— to obtain a surveillance warrant to monitor former Trump aide Carter Page. The FBI did not inform the FISA court that the Yahoo article relied on a source that, according to Senate Judiciary Committee Chairman Lindsey Graham, R-S.C., the FBI knew was politically motivated. Internal FBI text messages obtained by Fox News also show FBI brass fretting that a senior DOJ officials had similar concerns about a FISA source’s bias.

And text messages between ex-FBI employees and former lovers Peter Strzok and Lisa Page, unearthed last year, revealed that government officials were “leaking like mad” in the run-up to the Trump-Russia collusion probe.

The IG concluded by describing “the harm caused by leaks, fear of potential leaks, and a culture of unauthorized media contacts.”

“We do not believe the problem is with the FBI’s policy, which we found to be clear and unambiguous,” the IG added. “Rather, we concluded that these leaks highlight the need to change what appears to be a cultural attitude.”