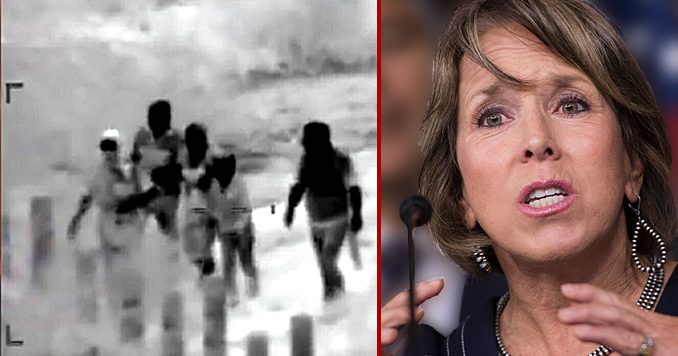 June 1, 2019
“As reported on May 7th, New Mexico’s Trump-hating open-borders governor took radical actions just to spite the President — but now that the results are proving disastrous for her state, she is begging the Feds for more help with the border!”
She’s asking the Feds to increase government personnel at the border and has requested reimbursement for humanitarian assistance, among other resources.
In other words, step in and fix the mess she created – while she refuses to admit such – plus use the crisis to expect more federal funds.  Typical Leftist logic…?
Go Figure!
Bonnie Nirgude’
NEWS

As we reported on May 7th, New Mexico’s Trump-hating open-borders Governor Lujan Grisham, took radical actions just to spite the President — but now that the results are proving disastrous for her state, she is begging the Feds for more help with the border!

You can’t make this up, folks.

Trump deployed National Guard and U.S. Army troops to the Mexican border to deal with a huge increase in illegal entries in January.

In act of what she called “resistance” against the president, New Mexico’s Democratic governor, Michelle Lujan Grisham withdrew 118 National Guard troops from the state’s southern boundary.

She said she did it to counter what she called Trump’s “charade of border fear-mongering,” and as a “protest” against Trump’s move to ban “transgendered” troops from the U.S. military.

The results have been nothing short of disastrous, with drug smuggling activities “exploding” since her deranged move.

As the NY Post reported, Mexican drug cartels and possibly terrorists have been thriving in New Mexico since two border patrol checkpoints were shut down as a result of Lujan Grisham’s withdrawal — with a 1,700% increase in drug smuggling alone in just 3 months.

But now, Lujan Grisham is seeking the federal government’s assistance to manage the impacts of the border crisis on New Mexico.

Lujan Grisham asked McAleenan to increase government personnel at the border and requested reimbursement for humanitarian assistance, among other resources.

“The governor wants to continue to urge the federal government to increase its personnel on the border as a means of improving the logistical and communications output,” the governor’s spokesman, Tripp Stelnicki, told KOAT.

Say WHAT?? Trump did increase Guard troops and she removed them! Now that her own citizens are furious, she is trying to pass the buck.

It is not working. Republicans are having a field day with New Mexico’s new, disastrous governor’s actions.

“Everything in her actions indicate that she believes there’s a crisis, but yet she will not dedicate the resources or request to her colleagues in Congress to start passing the laws that will change the situation there,” he criticized. “The border communities are going to continue to be overrun.”

Just 4 months in and Lujan-Grisham is proving to be one of the worst governors in America. Let’s hope voters remember her open-borders hypocrisy when it comes time for re-election.