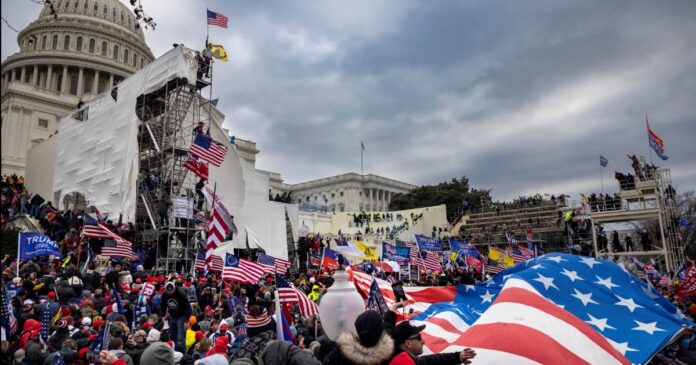 A federal judge on June 7 agreed to dismiss a charge against a defendant in the Jan. 6, 2021, breach of the U.S. Capitol.

The charges carry up to 20 years in prison.

Steven Metcalf, a lawyer for Lang, had argued in a recent filing that the defendant’s actions did not meet the definition of the law that he allegedly violated.

The law prohibits interfering with an official proceeding through intimidation against a person or other means. Lang was charged with the portion that states a person is committing a crime if they “otherwise obstruct, influence, or impede and official proceeding, or attempt to do so.”

But Lang entered the Capitol while Congress was counting electoral votes, which was not an official proceeding, Metcalf argued. He also said Lang did not take actions that constitute obstruction.

Metcalf cited a memorandum penned by then-Attorney General William Barr in 2018 explaining that obstruction laws don’t “criminalize just any act that can influence a ‘proceeding,’” but are aimed at “a range of ‘bad acts’—such as tampering with a witness or juror; or destroying, altering, or falsifying evidence—all of which are inherently wrongful because, by their very nature, they are directed at depriving the proceeding of honest decision-makers or access to full and accurate evidence.”

Nichols did not pen an order, but cited opinions he previously issued that dismissed the same count against other Jan. 6 defendants.

Nichols in March threw out the charge against Joseph Fischer and Garret Miller.

In one of the opinions, the judge said that the congressional session was an official proceeding but that the subsection of the law in question should be read narrowly, like the other subsections, which only apply to direct acts such as destroying documents.

“The Court therefore concludes that § 1512(c)(2) must be interpreted as limited by subsection (c)(1), and thus requires that the defendant have taken some action with respect to a document, record, or other object in order to corruptly obstruct, impede or influence an official proceeding,” he said. “Miller, however, is not alleged to have taken such action.”

Metcalf did not immediately respond to a request for comment.

Other U.S. judges in Washington have rejected requests to dismiss the obstruction charge on similar grounds.

Lang still faces 12 other counts, including disorderly conduct in a Capitol building; assaulting, resisting, or impeding officers using a dangerous weapon; and engaging in physical violence in a restricted building or grounds. He faces decades in jail if convicted.