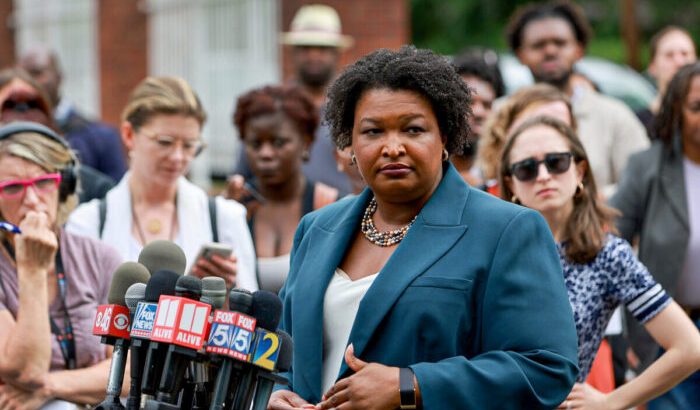 A federal judge on Friday threw out a lawsuit filed by Stacey Abrams challenging Georgia’s election system after she lost the 2018 gubernatorial race to Republican Gov. Brian Kemp.

The lawsuit, which sought to change how the state administers elections, was filed around four years ago by Fair Fight Georgia, a political action committee established by Abrams after her election defeat. Earlier this year, the judge pared down the lawsuit by dismissing many of its original complaints.

Abrams alleged “misconduct, fraud or irregularities” in the voting process. She took legal action to stop counties from throwing out some rejected provisional and absentee ballots when updated vote totals affirmed Kemp was the likely winner.

When she eventually conceded on Nov. 16, 2018, Abrams vowed to take legal action to continue fighting the outcome.

“Although Georgia’s election system is not perfect, the challenged practices violate neither the constitution nor the [Voting Rights Amendment],” U.S. District Judge Steven Jones said in his ruling.

Georgia Secretary of State Brad Raffensperger, who was the lead defendant in the case, hailed the ruling.

“This ruling allows local officials to focus on the task at hand this year—running a safe, secure, and accessible election,” he said on Twitter. “Stolen election and voter suppression claims by Stacey Abrams were nothing but poll-tested rhetoric not supported by facts and evidence.”

In a statement on Friday, Abrams said despite the loss, the case “had measurable results,” including “the reinstatement of over 22,000 ballots, substantive changes to voting laws, and a platform for voters of color to demand greater equity in our state.”

“During this suit, more than 3,000 voters shared their stories, creating an unprecedented and lasting record of voter testimony, which highlighted the suppressive effects of the Secretary of State’s actions on vulnerable voters,” she said on Twitter.

Abrams vowed to “expand the right to vote” for minorities if she wins the gubernatorial election.

After losing in 2018, lawyers for Abrams’s campaign and the Democrat Party of Georgia asked the court to order that provisional ballots that were rejected due to missing or incorrect information be restored. Her lawsuit also demanded that counties that had already certified vote returns correct their totals and re-certify the results.

The complaint specifically demanded to restore the votes of 1,095 Gwinnett County voters whose absentee ballots were rejected.