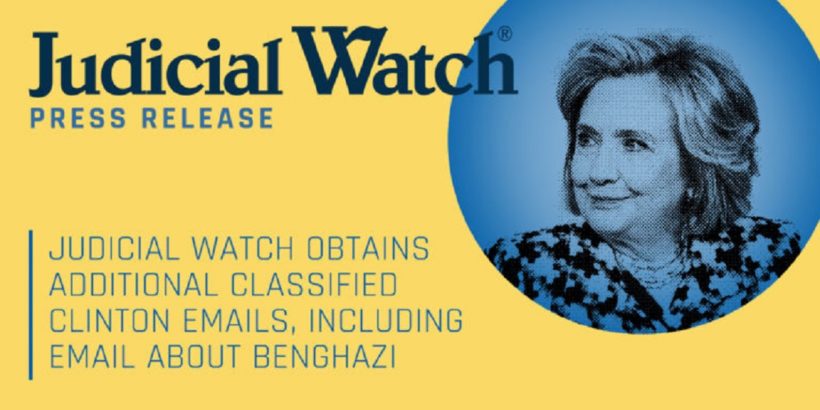 (Washington, DC) – Judicial Watch today released 80 pages of new emails recently found by the FBI that further document how former Secretary of State Hillary Clinton used her unsecure, non-government email to transmit classified and other sensitive government information. The documents include 11 new Clinton email documents. The emails include an email sent by Mrs. Clinton a month after the Benghazi terrorist attack referencing a “Benghazi security” issue. The emails also include talking points, which are redacted, for a meeting with President Obama. (This is the second release from the batch of Clinton emails the FBI inexplicably found late last year.)

The State Department previously claimed it had produced all releasable Clinton emails, including emails recovered by the FBI that Hillary Clinton tried to destroy or withhold. The State Department initially claimed all responsive emails had been produced in 2018, but then found more emails, which were produced for the first time early this year.

The emails were produced to Judicial Watch in a Freedom of Information Act (FOIA) lawsuit for all of Clinton’s government emails sent or received on her non-government system (Judicial Watch v. U.S. Department of State (No. 1:15-cv-00687)):

The new emails include an October 13, 2012, message from Clinton telling private attorney Robert Barnett about a conversation with Jake Sullivan, Clinton’s senior advisor and deputy chief of staff, about Benghazi: “Jake and I were discussing the Benghazi security issue since he tried to tell [Redacted] would be asked about it but they didn’t think so. Might be good for you to call Jake too.” Clinton also mentions then-candidate Mitt Romney’s “47% remark,” referring to his dismissal of Obama voters as irresponsible.

On August 29, 2011, Sullivan sends a “cheat sheet” with “key issues” to Clinton, Abedin and Clinton’s confidential assistant Monica Hanley including “Talking Points for POTUS” for a briefing that day. The talking points are completely redacted.

The new email cache includes an email dated August 31, 2011, that former Assistant Secretary of State for Near Eastern Affairs Jeffrey Feltman sends to former Deputy Chief of Staff Huma Abedin, William Burns and others, which is heavily redacted as classified. Burns forwards the email to Sullivan. Sullivan forwards it to Clinton’s private email, and she responds: “I called him [redacted.] Didn’t you get memcon?”

On December 22, 2009, former Ambassador Joseph Wilson emails Clinton “directly … rather than Sid [likely Sidney Blumenthal]” about Afghanistan, disparaging “cost plus contractors” and promoting his company, Symbion Power. Wilson includes a memo from his boss, an Inspector General audit of USAID in Afghanistan’s power sector activities and a memo of USAID management’s comments regarding the audit. Clinton forwards the email to Deputy Secretary of State for Management and Resources Jacob Lew, Mills and Sullivan with the following instructions:

Please check out what Joe is saying here. He is now working for a company that has a good track record building in Iraq and wants to do so in Afghanistan. Let me know. Thx.

On August 30, 2011, Melanne Verveer emails Clinton an article titled “Family planning as a pro-life cause,” and tells Clinton “I know you are going off to France for the Libya meeting.” Clinton forwards the message to Sullivan.

On November 1, 2012, Valmoro sends Clinton, Abedin and Hanley a copy of Clinton’s sensitive schedule that includes a briefing with President Obama and afterward a meeting with then-Special Envoy for Middle East Peace David Hale, Burns and Sullivan.

In a September 1, 2011, email marked sensitive Abedin notifies Clinton that United Arab Emirates’ money for the Transitional National Council of Libya is blocked in the U.S. financial system. The assumption was that the money was actually frozen Libyan assets. The UAE claimed it was not Libyan money.

“Magically, after years, the FBI finds more Clinton emails that are classified, involve Benghazi, and detail communications with President Obama,” said Judicial Watch President Tom Fitton. “This drip, drip game that the DOJ, FBI, and State are playing is a key reason a federal court authorized more discovery, including the sworn deposition of Hillary Clinton.”

The State Department did not provide information about where the emails were found; why they were not previously produced; or if additional records are anticipated. In November 2019, the State Department first disclosed to the court that the FBI had found this latest batch of emails. In a December 2019 court hearing, a Justice Department attorney could not tell a federal court judge how and where the FBI discovered the new cache of Clinton emails. In authorizing additional discovery, including the deposition testimony of Hillary Clinton, in this separate Judicial Watch lawsuit, U.S. District Court Judge Lamberth specifically referenced the FBI’s recent discovery of Clinton emails:

With each passing round of discovery, the Court is left with more questions than answers. What’s more, during the December 19, 2019, status conference, Judicial Watch disclosed that the FBI recently produced approximately thirty previously undisclosed Clinton emails. State failed to fully explain the new emails’ origins when the Court directly questioned where they came from.

Even though many important questions remain unanswered, the Justice Department inexplicably still takes the position that the Court should close discovery and rule on dispositive motions. The Court is especially troubled by this. To argue that the Court now has enough information to determine whether State conducted an adequate search is preposterous, especially when considering State’s deficient representations regarding the existence of additional Clinton emails.